Miller Recommends Stormy Liberal be Retired, Instead He Will Go to New Barn 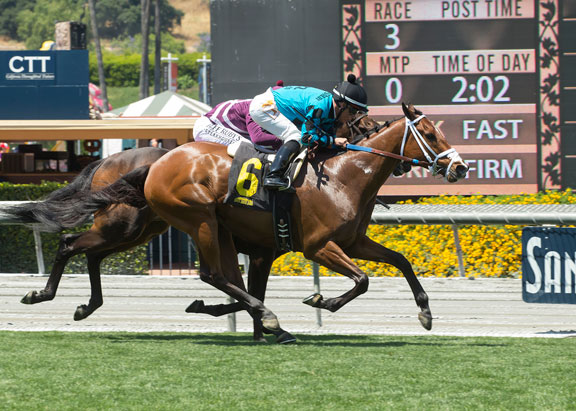 Trainer Peter Miller has announced that he will no longer be training two-time GI Breeders' Cup Turf Sprint winner Stormy Liberal (Stormy Atlantic) after being unable to resolve a dispute with one of the 7-year-old's owners regarding the horse's future.

“I am sorry to announce that Stormy Liberal will be leaving our barn to continue racing under another trainer,” Miller said. “Both my veterinarian and I believe the horse should be retired. In fact, we had already started inquiring for him to retire to Old Friends so he could live out his days in comfort and good care, and allow visitors to enjoy him up close.”

Stormy Liberal has been campaigned by the partnership of Gary Hartunian's Rockingham Ranch and David Bernsen. Hartunian said Tuesday that he has also believed the horse should be retired and that he has been bought out by Bernsen.

“We brought him back this year and it just wasn't him,” Hartunian said. “He was letting horses pass him that shouldn't have been passing him. At some point you have to retire a horse and call it a day. David thought otherwise and he had the option to buy me out. The whole thing started to get toxic and I was in the middle of it. Peter and David, they had different views about what to do with the horse.”

Bernsen responded to an email from the TDN and said he was unavailable for an interview because he was traveling, but did write “there are two sides to this story that led to the removal of Stormy Liberal from Peter Miller.”

According to Hartunian, Stormy Liberal has been sent to David Scanlon's training center in Ocala, where he will be evaluated before any decisions are made regarding his future. Hartunian speculated that perhaps Stormy Liberal has run his last race after all.

“He will be well taken care of,” Hartunian said. “Dave is going to do a thorough evaluation and after that I think he will probably just retire him. Me and Pete wanted to retire the horse. He said he wanted someone independent to look at the horse and give him an evaluation on him. Once that happens, I think Dave, who is a good guy, will probably say, 'You guys were right.' I don't own the horse anymore and I have no animosity toward anyone. I wish him the best.”

Stormy Liberal was claimed by $40,000 in 2016 by the Miller, Hartunian, Bernsen team. Some 13 months later, he won his first of two Breeders' Cup Turf Sprints, winning the race at Del Mar by a head. He defended his title a year later at Churchill Downs, winning by a neck. Hartunian believes the second Breeders' Cup win took so much out of the horse that he was never again the same.

“In the 2018 Breeders' Cup, with Stormy and World of Trouble (Kantharos) going after one another, I thought that was the hardest fought stretch run I had seen since I've been in the game,” he said. “I think Stormy gave it all he had and that was that. He was telling us, 'Guys, I'm tired. I only have so many fights in me.'”

Stormy Liberal returned to make seven starts this year, but failed to win a race. In his most recent outing, he was eighth in the 2019 Breeders' Cup Turf Sprint.

“It is very rare to claim a horse for 40k, win two Breeders' Cup races and earn the prestigious Eclipse Award.” Miller said. It is my professional opinion that he has given and accomplished enough. While the owners certainly have every right to make these choices, and I respect that, I would like the record to show that I was not in favor of this decision. Stormy has been very special to our team, and to me. We will miss him and hope for the best.”