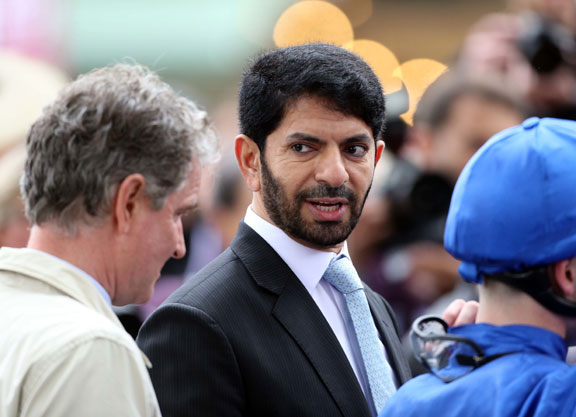 Last year’s G3 Autumn S. winner Military March (GB) (New Approach {Ire}), a leading fancy for the G1 Investec Derby before meeting with a setback in the lead-up to the race, will follow a similar path over the winter to his Saeed bin Suroor stablemate Benbatl (GB) (Dubawi {Ire}), the trainer said. Military March, last seen finishing fourth in the G1 2000 Guineas on June 6, is training towards an autumn return in Europe and will later target dirt races in Dubai.

“Military March is back in light training,” bin Suroor said. “We are not going to rush him and he will be out at the end of September or early October, where we will find a race for him. The horse is doing well physically. We will look to give him one more run in England, then take him to Dubai–but he needs to have one more run here to make sure he is fit when he goes out there as he is a big horse. We will target one of the Al Maktoum Challenge races to start with to see if he handles the dirt. Everyone is always searching for a horse for the Dubai World Cup and if he did well on the dirt he could be a horse for the race. We will have to see how he handles the dirt, but if he doesn’t we would switch him back to the turf. It is too early to say what the future plans will be, but if the dirt didn’t work out we could look at the Dubai Turf or Sheema Classic.”

As for Benbatl, who won the G2 Singspiel S. and G2 Al Maktoum Challenge Round 2 over the winter at Meydan and was last seen finishing third in the Saudi Cup, he is expected to resurface next in the G1 Prix Jacques le Marois on Aug. 16 or the G1 Juddmonte International on Aug. 19.

“We will have a look at which race to go for closer to the time, as it doesn’t matter if he goes a mile or mile and a quarter,” bin Suroor said. “He always runs well fresh, like we saw when he won the Group 2 at Newmarket. We were getting him ready for the Dubai World Cup and he was flying, but he didn’t get the chance to run [with the meeting cancelled due to the coronavirus pandemic] so we decided to give him a break as he had already had three runs.”