Mighty Heart Tries for Encore in Prince of Wales 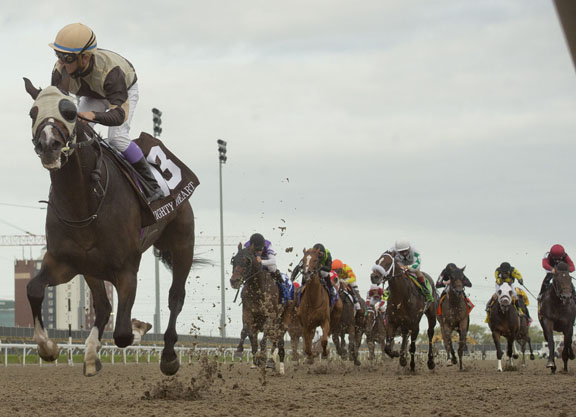 It's not often that a double-digit longshot romps by 7 1/2 lengths in a million-dollar race, but that's the feat Larry Cordes's Mighty Heart (Dramedy) pulled off in the Queen's Plate. Sept. 12 at Woodbine. Tuesday, the homebred will look to prove that was no fluke in the second leg of the Canadian Triple Crown, the Prince of Wales S., at Fort Erie.

Bearing out badly in two unsuccessful tries to open his career in the winter at Fair Grounds, Mighty Heart was given nearly four months off and came back as a new horse on Woodbine's Tapeta surface, running away to a 4 1/4-length graduation at 13-1 July 11. Striking the lead in deep stretch before flattening a bit to finish third Aug. 1, the bay was a pacesetter for the first time in his career in the Queen's Plate and crushed 13 rivals despite drawing the second-widest post. He drilled an interim half-mile in :47 2/5 (8/18) Sept. 24 at Woodbine to stay on his toes for trainer Josie Carroll, who won the Prince of Wales in 2016 with Amis Gizmo (Giant Gizmo).

Second choice on the morning-line in the nine-horse group is Donato Lanni and Daniel Plouffe's Clayton (Bodemeister). A dominant first-out victor last November at Woodbine, the $50,000 Keeneland September grad had to be shelved for nearly seven months, but came back with two victories in his first three tries as a sophomore, including a tally in the Plate Trial S. Aug. 15 at Woodbine. Trying Mighty Heart on the far turn of the Queen's Plate, he proved no match and settled for third.

A neck behind him that day was Ilium Stables' third choice Tecumseh's War (Summer Front). Prior to that run, the dark bay beat Mighty Heart despite traffic trouble when finishing second in the aforementioned Aug. 1 allowance in Etobicoke. The lone dual stakes winner in the field, Dotted Line (Signature Red) rates an outside chance. Capturing the Frost King S. and Kingarvie S. as a juvenile, the Norseman Racing Stable colorbearer is looking for his first triumph as a 3-year-old, but was third in both the GIII Marine S. and Plate Trial before fading to seventh in the Queen's Plate.