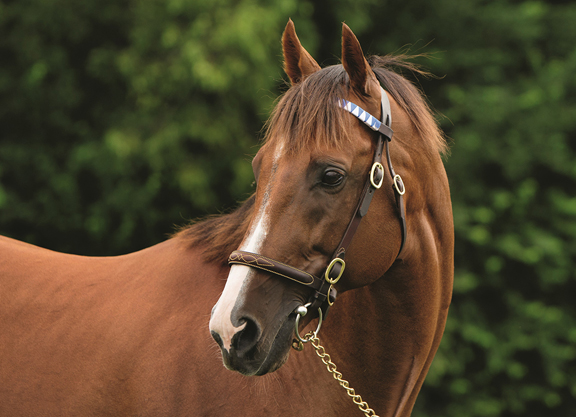 Darley's Midshipman is on track for a big year with several up-and-coming performers. | Darley

He may not be flashiest sire on the Darley stud roster, but the quietly efficacious Midshipman (Unbridled's Song- Fleet Lady, by Avenue of Flags) might just be the most consistent.

He ranks second amongst his studmates, behind Jonabell's elder statesman Medaglia d'Oro, in terms of blacktype runners to named foals at over a 12% clip, and his $7,500 stud fee this year only adds to his appeal.

“I think the area where Midshipman really excels, and it's a very easy selling point, is that everyone has a mare that would suit him because he's so consistent,” Darley's Assistant Sales Manager Kate Galvin said. “There's a low risk factor as a breeder when you're using Midshipman and I feel really confident that he can get mares a runner. He's not expensive compared to his competition and he's very impressive physically. All those things combined really make for a no-brainer mating.”

This year, Midshipman's runners are shining at the highest level. His progeny have already collected five blacktype wins with potential for bigger things to come as the year progresses.

Last month, Royal Ship (Brz) broke through to earn his first graded stakes win in the U.S in the GII Californian S. at Santa Anita. The 5-year-old gelding arrived at the barn of Hall of Famer Richard Mandella last summer after taking a Group 1 and Group 3 in Brazil.

“Royal Ship's win was a really significant benchmark for Midshipman and a very interesting angle as well because Midshipman started shuttling to South America five years ago,” Galvin noted.

Royal Ship made four starts for Mandella prior to his win in the Californian, including a third-place effort in the GII Del Mar Mile H.

“He's a quality horse,” Mandella said. “We were kind of struck with back luck in his first few races, but there's nothing you can do about that. He's doing very well now and he'll get a couple of good workouts in starting here in the next few days.”

Mandella reported that the gelding is pointing towards the GI Hollywood Gold Cup on May 31.

“With the possibility of Midshipman having a Grade I-winning American horse now becoming a reality, that would mean everything for Midshipman,” Galvin said. “It would really drive home the point that he is one of the best proven stallions in Kentucky.” 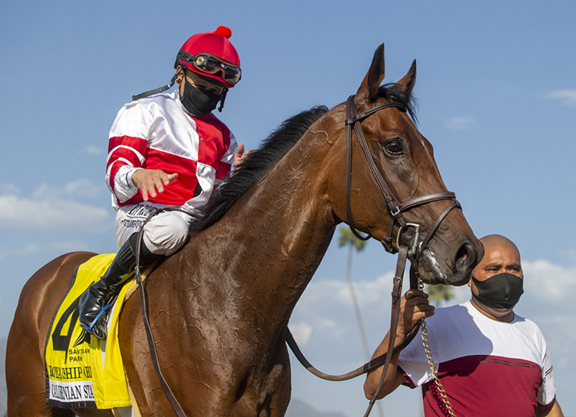 Royal Ship gets his first stateside win in the GII Californian S. | Benoit

Two days before Royal Ship's victory on April 17, a juvenile filly by the same sire named Averly Jane broke her maiden at Keeneland by nearly nine lengths. The Wesley Ward trainee journeyed to Churchill Downs soon after and stayed undefeated in the Kentucky Juvenile S. Ward has noted plans of pointing the 2-year-old towards the Albany S. at Royal Ascot.

The Stonestreet-campaigned filly was a debut juvenile winner last summer and then took the Colleen S. at Monmouth before running second in the G3 Prix d'Arenberg at Longchamp.

“She's a filly that really got some attention, because here you have a major racing operation having a 2-year-old winner by Midshipman,” Galvin said. “We're very excited about her this year because she just made her 3-year-old debut a couple of weeks ago at Gulfstream and she won [the Melody of Colors S.], so we're looking forward to seeing what she'll be doing this summer.”

Galvin added that along with Midshipman's well-recognized asset in consistency, his other big selling point is his versatility.

“Showing the full gauntlet of what Midshipman can get, Royal Ship won going a route of ground as an older horse on dirt, but then you have your top 2-year-old-types like Wink and Averly Jane.”

Wink's victory last month in the Melody of Color S. was on the grass going five furlongs, a reflection of how Galvin said Midshipman was first recognized at stud.

“He got off the mark as a stallion who gave his progeny a ton of speed,” Galvin said. “['TDN Rising Star'] Lady Shipman was his first mainstream horse and she was just an absolute beast sprinting on the turf. She ran seven triple-digit Beyers, she won 11 stakes and was second in the 2015 GI Breeders' Cup Turf Sprint.”

Other leading earners for Midshipman include Dearest, a three-time stakes winner who took the 2016 GIII Sugar Swill S. going six furlongs on the dirt, as well as the Kenny McPeek-trained Princess Warrior, who ran second in the GI Darley Alcibiades before switching to the turf at three to take the GII Mrs. Revere S. at a mile and a sixteenth.

“We see a variety of results in his best runners,” Galvin said. “If you have a young mare that you don't want to put a ton of money into her first year or two, for less that $10,000 you can go to a stallion who has a higher percentage of blacktype horses to runners than the majority of stallions in Kentucky. You have to pay more than $90,000 to get a horse that has a better number than him in that statistic.” 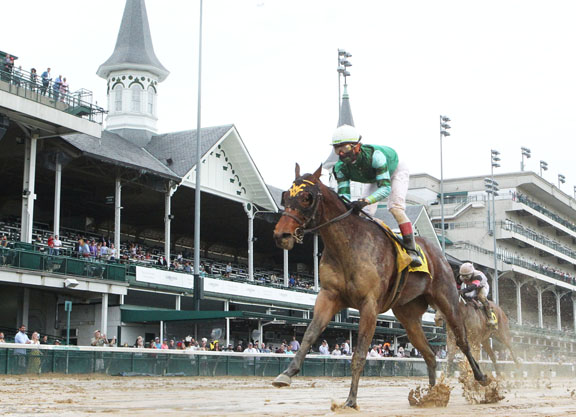 Galvin said that Midshipman has become a go-to stallion for many breeders looking to find the true potential in a young mare.

“Obviously unproven stallions are very popular, but as a breeder you can get into a trap where all of a sudden, you're four or five years in and look at a mare's produce record and you don't know if you gave her a chance or not if she hasn't gotten a runner. So I always tell people, let's backtrack, reduce your risk and breed her to Midshipman, and let's see what happens.”

While Midshipman is now an in-demand representative for Darley, Galvin said that the early days at stud for the 2008 Breeders' Cup Juvenile champion weren't quite so simple.

“Midshipman had a really unique start to his stud career. Most stallions who are Eclipse Champion Juveniles start their career with a bang with everybody lining up to breed to them. But Midshipman had a bit of a tougher start. It was kind of a reverse demand situation than what you typically have with a young stallion.”

When Midshipman suffered from minor soundness issues as an older horse and there were some questions regarding the overall soundness of the sire line at the time, breeders were initially skeptical.

“He offered everything that you want a top stallion to have,” Galvin explained. “He has an amazing pedigree. He and Frosted are very closely related- they're both from Stonerside breeding. But the breeders just weren't super excited about him and he actually struggled to get mares in his first few years at stud. It wasn't until the year that he had his first 2-year-olds in 2014 and they were breezing at OBS and Gulfstream, that's when the phone started ringing for Midshipman.”

“I do think one of the reasons Midshipman has been successful is that he's done it the hard way,” Galvin said. “Since 2014, he's been standing for less than $10,000. We've just made an effort to get plenty of mares to him and get good breeders to use him, and that has really paid off in spades. Now we're starting to see these bigger operations having no problem buying a Midshipman at the sale and they're obviously all breeding to him.”

So while a Grade I win this year would of course raise the profile of the now 15-year-old Midshipman, he has already sealed his deserved space in history as an influential part of the Darley sire program, doing so at a modest stud fee along the way.

“Getting a Grade I win in the U.S. would make a big difference to Midshipman,” Galvin said. “It will probably raise the profile of the type of mare he gets and raise the profile of his sales results, so it would make the latter half of his career stronger. But he's also a stallion that has done so much, he really doesn't owe anyone anything. We're just very proud of the results he's had so far.”