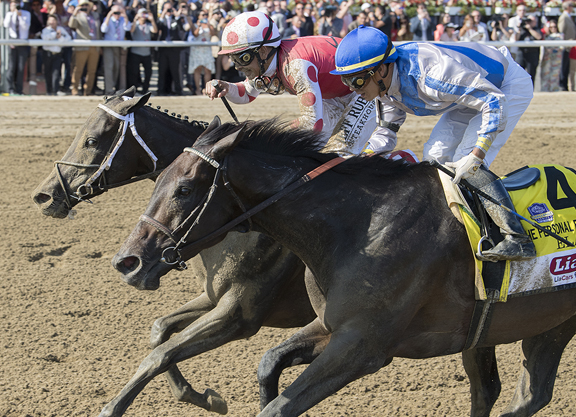 Midnight Bisou and Elate in the 2019 Personal Ensign | Sarah Andrew

Midnight Bisou (Midnight Lute–Diva Delite, by Repent), the reigning Eclipse Award-winning older female and five-time Grade I winner, has been retired from racing, according to Jeffrey Bloom, co-owner and managing partner or Bloom Racing Stable.

“I cannot begin to tell you what this mare has meant to me, my family, and my partners,” said Bloom. “The places she has taken us and the thrills she has given us are immeasurable. And just to be in her presence is to feel what greatness is all about. Her calm, inquisitive demeanor, her fierce determination in a race is unlike any other horse. She is all class. I'm just so grateful I got to be a part of her incredible journey, and I'm extremely excited to watch the next phase of her life, watch her become a mother, and for her babies to hit the track with all of her class and elegance, and continue the Midnight Bisou legacy.”

Bred in Kentucky by Woodford Thoroughbreds, Midnight Bisou was bought back on a bid of $19,000 at the 2016 Keeneland September sale, but improved over the next seven months and was hammered down to Bloom as agent for $80,000 at the OBS April Sale the following spring (under-tack video). Turned over to Bill Spawr in California, Midnight Bisou was sent off at debut odds of 21-1 for Bloom and Allen Racing LLC and was beaten a nose by future Grade I winner Dream Tree (Uncle Mo), to whom she was also beaten a nose in the Desi Arnaz S. in her next start.

She became the queen of the hill in Southern California in 2018, winning the GII Santa Ynez S., the GIII Santa Ysabel S. and the GI Santa Anita Oaks (video) in convincing fashion before heading to Churchill Downs for her next appearance.

On the strength of that form, Midnight Bisou was made the 23-10 favorite for the GI Longines Kentucky Oaks, but she endured a nightmarish trip from a wide draw and did well to be third, beaten just over four lengths by Monomoy Girl (Tapizar). With better and richer options for his filly in the eastern half of the U.S., Bloom elected to transfer Midnight Bisou to trainer Steve Asmussen, who saddled the filly to a towering six-length success in the GII Mother Goose S., with Madaket Stables now part of the ownership group. Clearly second to Monomoy Girl in the GI CCA Oaks, the dark bay was third in the 10-furlong GI Alabama S., then crossed the line a neck second to Monomoy Girl in the GI Cotillion S. (video) before being elevated to the victory. She closed the season with a rallying third to her arch-rival in the GI Breeders' Cup Distaff.

The Making of a Champion…

While Monomoy Girl spent the entirety of 2019 on the shelf, Midnight Bisou dominated the division, with seven wins from eight starts. Ultra-game in taking the GI Apple Blossom H. by a nose in April, she was imperious in adding the GI Ogden Phipps S. and GIII Molly Pitcher S. before throwing down with Elate (Medaglia d'Oro) in one of the year's most thrilling stretch battles in the GI Personal Ensign S. at Saratoga (see below). A nose best that day, she romped in the GII Beldame S. before suffering her first defeat of the season in the Distaff. She was nevertheless the runaway winner of the Eclipse, besting her Distaff conqueror Blue Prize (Arg) (Pure Prize) by a wide margin.

Training On at Five…

The morning of the Distaff, Bloom announced that Midnight Bisou would be withdrawn from the Fasig-Tipton November sale and would instead focus on a 5-year-old campaign. Connections selected the inaugural $20-million Saudi Cup for their mare's seasonal debut, and despite racing far back early, she made eye-catching progress up the rail in the final furlong to finish a close second to Maximum Security (New Year's Day) (video). In the meantime, Monomoy Girl had made a successful return to action and a much-anticipated rematch loomed in the GII Fleur de Lis S. June 27. But the Brad Cox runner was re-routed for the GII Ruffian S. at Belmont two weeks later and Midnight Bisou took full advantage, rolling home by 8 1/4 lengths. Beaten a neck into second by Vexatious (Giant's Causeway) in this year's Personal Ensign Aug. 1, Midnight Bisou was being pointed for this weekend's GI Juddmonte Spinster S., but she was off following a work at Saratoga this past Monday and was sent to Rood and Riddle in Lexington to be examined by Dr. Larry Bramlage. The renowned vet confirmed Wednesday that Midnight Bisou had sustained a sesamoid fracture in her right front fetlock. Surgery is not indicated and the injury will not impact her future as a broodmare.

Midnight Bisou will be consigned by Elite Sales to this year's Fasig-Tipton Night of the Stars Nov. 8.

“I want to thank trainer Steve Asmussen, assistant trainer's Scott Blasi, Darren Fleming, her main exercise rider Angel Garica, groom Gerardo Morales (Chocolate), and the entire Asmussen team for the devotion and care they provided each and every single day,” Bloom added. “I would also like to thank her regular rider, Hall of Fame jockey Mike Smith, who shared a very special bond with her, and was aboard for all five Grade I wins, as well as the other jockeys who were fortunate enough to climb aboard. Finally, a sincere thank you to all of Midnight Bisou's legion of fans who have been extremely loyal with their support and love for our Champion throughout her career.”

Midnight Bisou was never out of the top three in her 22 career starts at 10 different racetracks, compiling a record of 13-6-3 and bankrolling $7,471,520. She has been sent to WinStar Farm where she will be turned out in the interim.