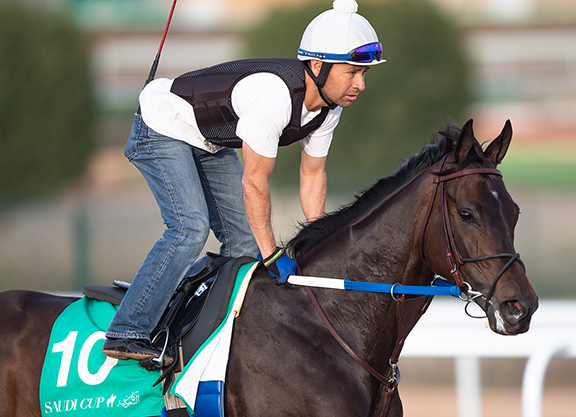 Bloom Racing Stable LLC, Madaket Stables and Allen Racing LLC’s Midnight Bisou (Midnight Lute), last seen finishing a bang-up second in the inaugural $20-million Saudi Cup in Riyadh Feb. 29, is tentatively scheduled to resume the American portion of her career in the GII Fleur de Lis S. at Churchill Downs June 27. The 5-year-old mare worked five furlongs in a leisurely 1:02.80 at Keeneland Friday, May 15, before vanning to Churchill Downs over the weekend.

“All of her breezes up until the other day were designed to get some additional foundation under her,” managing partner Jeff Bloom said Monday. “Now that she’s had her first five-eighths since coming back from Saudi, [trainer] Steve [Asmussen] plans to start cranking up the tempo and start gearing her up for getting ready to run again, which right now tentatively on the calendar would be the Fleur de Lis next month at Churchill.”

A $200,000 event going a mile and an eighth, the Fleur de Lis serves as a ‘Win and You’re In’ qualifier for the GI Breeders’ Cup Distaff at Keeneland in early November.

“I was talking to Steve last night and we were just marvelling about how unique she is by not getting fazed by things, like travel or new environments, and also just how strong she is, physically,” he said. “I just got a video of her, she had just arrived at Churchill, and she’s carrying incredible weight, she’s got great muscle, her coat couldn’t look any better, she’s happy. It’s as though she never traveled anywhere.”

Not unlike other industry shareholders, Bloom is excited to see racing getting back on its feet.

“The powers that be in those racing jurisdictions have been working tirelessly–the horsemen, the racetrack operators–it’s been a challenge,” he offered. “It’s an understatement to say that I am thrilled and excited about the fact that we’ve now seen some of these areas lift the hold and are opening up racing–on so many levels, is critically important for all of us in the industry. The racing ties into all the things we do: as breeders, as people that buy and sell horses at auction, all of this relies and revolves around that we have racing opportunities. I am over-the-top excited. In general, the ability to have the underlying light at the end of the tunnel makes it so much easier to move forward. It’s an enormous relief.”

“She’s a remarkable racemare,” he said. “Her record speaks for itself. Huge shout-out to her connections and in particular, her trainer, for having her come off such a long layoff and be effective, having had so many hiccups along the way. Those good horses, like she is, step up to the challenge. She showed her grit and her desire and her talent and so, sure, as a fan, I love seeing that kind of stuff.”

In four head-to-head battles between the fillies in 2018, Monomoy Girl crossed the line ahead of Midnight Bisou on each occasion (Midnight Bisou was awarded the GI Cotillion S. via disqualification of Monomoy Girl). As both a fan and an owner, Bloom is looking forward what the rest of the season may hold.

“At the end of the previous year, we were really excited about having another year of matchups between Midnight Bisou and Monomoy Girl,” he explained. “It’s good for racing. We felt at the time that our mare was up to the challenge and we were going to get to see some really good races between two very talented racehorses. It’s exciting to know that the distaff division is that much stronger. I’m super happy for her connections, but at the end of the day, it’s a huge positive for the industry to have the potential for a pretty significant matchup.”