Midnight Bisou Back to Her Best GII Fleur de Lis 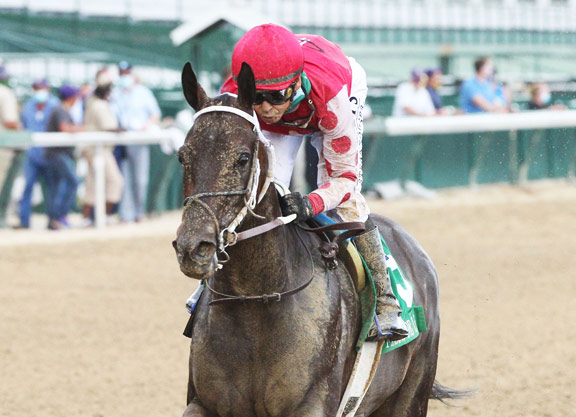 Champion Midnight Bisou (Midnight Lute) was back to her best form Saturday at Churchill Downs, winning the GII Fleur de Lis H. with ease in her first start back on U.S. soil since finishing an ultra-game second in the Saudi Cup in February. GI Kentucky Oaks victress Serengeti Empress (Alternation) jetted straight to the lead, while favored Midnight Bisou bided her time back in mid-pack through a brisk :23.18 first quarter. Inched closer by Mike Smith, Midnight Bisou moved up into third, while still several lengths off the pacesetter, as the half went in :46.15. Charging up on the leader's outside entering the far turn, the Eclipse winner rocketed past Serengeti Empress at the top of the lane and effortlessly cruised clear under a motionless Smith to win for fun. Motion Emotion (Take Charge Indy) held second with Another Broad (Include) in third and Serengeti Empress faded to fourth. With her victory in the Fleur de Lis, Midnight Bisou secured a spot in the starting gate for the GI Breeders' Cup Distaff in November.

“She's a really special mare,” said Hall of Famer Steve Asmussen. “To come back, in that sort of style, is just tremendous. She has such an amazing talent and such a great relationship with Mike. She beat a wonderful-looking group of mares. We have nothing but respect towards them.”

Smith expressed similar sentiments, saying, “She's just an amazing mare. I actually had took the lead a little before I wanted to. We were planning on laying a little bit closer but the way Serengeti Empress was winging it on the front end we were a little further back. She's just incredibly special.”

Midnight Bisou captured six of her seven starts last term, including the GI Apple Blossom H., GI Ogden Phipps S. and GI Personal Ensign S. She prepped for the Breeders' Cup with a facile score in Belmont's GII Beldame Invitational S. in September and finished 1 1/2 lengths shy of Blue Prize (Arg) (Pure Prize) when second in the Distaff at Santa Anita Nov. 2. Scratched from the Fasig-Tipton November sale to stay in training another season, Midnight Bisou was a never-in-doubt winner of the Eclipse Award for top older dirt female. Making her seasonal bow in the inaugural $20-million Saudi Cup Feb. 29, the dark bay rallied up the rail to finish a valiant second to fellow champion Maximum Security (New Year's Day).

Midnight Bisou is the only Eclipse winner by Midnight Lute and is one of four Grade I winners, 13 graded winners and 33 black-type winners for that Hill 'n' Dale stallion. Her Grade III-winning dam Diva Delite summoned $1.2 million from David Redvers at last term's Fasig-Tipton November Sale, carrying a foal by Justify. The 13-year-old mare also has an unraced 3-year-old colt named Warrior in Charge (Warrior's Reward); a juvenile filly by Wicked Strong; and a yearling colt by Pioneerof the Nile.