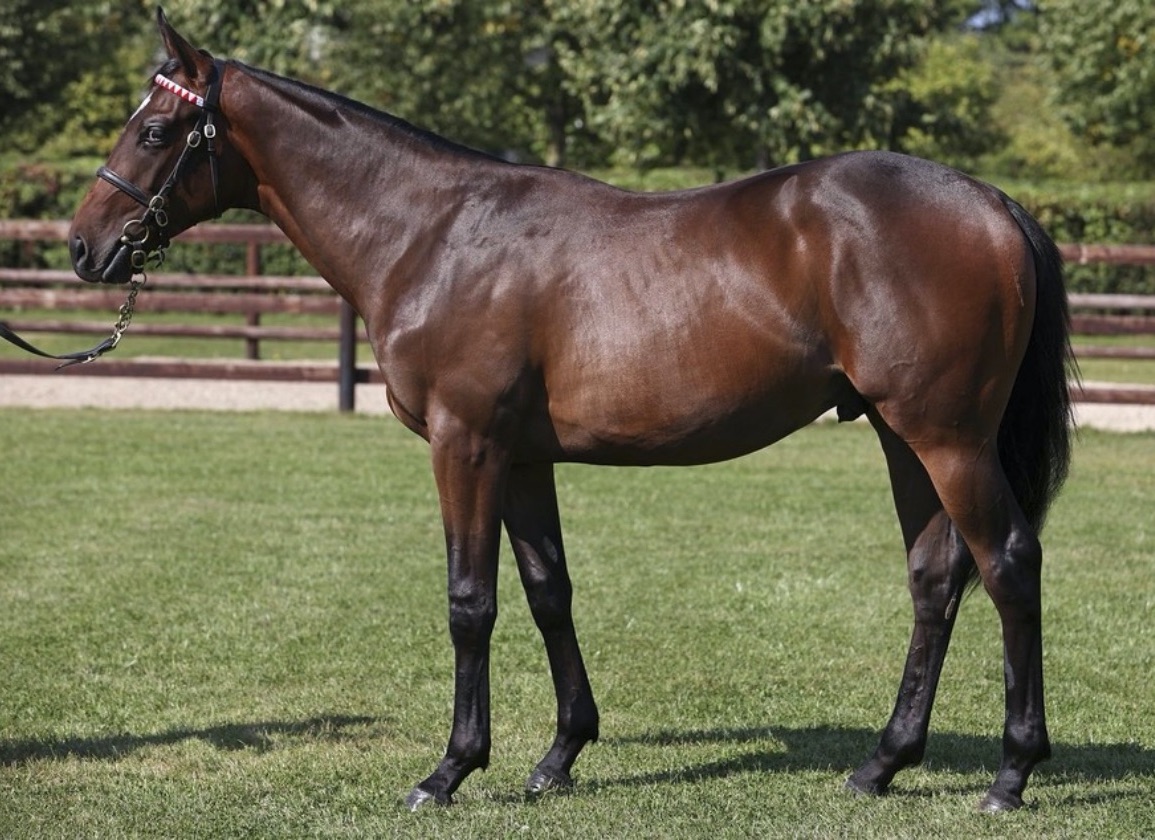 The sale-topping Frankel colt out of Chantra

From a smaller catalogue this year,195 horses went through the ring and though some of potential star acts were returned to their breeders, the day's clearance rate was greatly improved on recent years at 79.5%, with 155 yearlings sold. That upturn from 66.5% in 2020 led to a small boost in the figures for all sectors, with the average up by 5% at €43,448 and the turnover of €6,734,500 representing an improvement of 4%.

“I'm delighted to see a very strong middle market, which is a really good sign for the German racing industry,” said BBAG managing director Klaus Eulenberger as the sale concluded.

Janet Ostermann's Gestüt Haus Ittlingen offered the only two yearlings by Frankel in the catalogue, sons of mother and daughter Chantra (Ger) (Lando {Ger}) and Calyxa, and though the latter's colt was bought in at €475,000, later in the session, the bay son (lot 176) of 17-year-old dual listed winner Chantra hit the mark.

Anthony Stroud is a regular visitor to BBAG on behalf of Godolphin, which has enjoyed notable success with Frankel this year via its homebred Derby winner Adayar (Ire) and Irish Derby winner Hurricane Lane (Ire).

“Of course Frankel goes without saying,” Stroud noted. “This colt was a really good walker, very athletic. He'll go back to England.”

Godolphin are not only good supporters of the main German yearling sale but also regularly field runners over the road at Baden-Baden racecourse. The team's royal blue silks have made it to the winner's enclosure following the last three runnings of the G1 Grosser Preis von Baden and this Sunday Saeed Bin Suroor is set to saddle Passion And Glory (Ire) (Cape Cross {Ire}), who will be ridden by Oisin Murphy. Among his opponents will be this year's G1 Deutsches Derby winner Sisfahan (Fr) (Isfahan {Ger}), the current leading light of Dr Stefan Oschmann's Darius Racing operation.

Oschmann's racing manager and agent Holger Faust was active at BBAG through the day and among his purchases was an Australia (GB) half-brother to another of the outfit's Group 1 winners, Donjah (Ger) (Teofilo {Ire}). Sold for €240,000 as lot 181, the colt was bred and consigned by Gestüt Karlshof.

Miss Yoda (Ger) (Sea The Stars {Ire}) is one of the leading graduates of the BBAG Yearling Sale in recent years. After selling for €280,000 to Georg Von Opel three years ago and sent into training in Newmarket she progressed to win last year's G1 Preis der Diana. Her breeder Gestüt Etzean repeated that Classic success with this year's winner of the German Oaks equivalent, Palmas (Ger) (Lord Of England {Ger}), and took the decision to buy out Ling Tsui in the foal share agreement for Miss Yoda's yearling full-sister, offered as lot 192.

Ralf Kredel of Etzean went to the same price as her elder sister had made, €280,000, to keep the chestnut daughter of G2 Diana Trial winner Monami (Ger) (Sholokhov {Ire}). He said, “She is a May foal and she'll go back to the stud. We'll take our time and break her in in the spring.”

One of the potential box-office lots, Gestüt Rottgen's Sea The Stars (Ire) half-sister to Derby winners Windstoss (Ger) (Shirocco {Ger}) and Weltstar (Ger) (Soldier Hollow {GB}), was led out unsold at €680,000 but the next lot into the ring (55), a half-brother to Godolphin's listed Blue Riband Trial winner Wirko (Ger) (Kingman {GB}) from the same stud, was the leading light for much of the day when knocked down at €220,000 to second-season Berlin trainer Friederike Schloms.

The son of Reliable Man (GB) out of the treble listed winner Weltmacht (GB) (Mount Nelson {GB}) was bought for owner Jurgen Sartori, who later added lot 43 to his string for next year. The Lope De Vega (Ire) filly from Gestüt Fahrhof had earlier been led out of the ring unsold until a private deal was struck by Andreas Suborics to buy her on Sartori's behalf for €200,000.

Moritz Becher of Stall Hanse stepped in to buy lot 63, a Lord Of England colt, whose illustrious family has been enhanced further this year by the Derby and King George winner Adayar, at €120,000. His Sea The Stars half-sister had set a new BBAG record when selling to Godolphin for €820,000 in 2019. Now named Anne d'Autriche (Ger), she is as yet unraced. Her younger sibling will remain in Germany to be trained by Peter Schiergen.

Gestüt Park Wiedingen's sister to Group 1 winner and young sire Dschingis Secret (Ger) (Soldier Hollow {GB}) caused a flurry of excitement when bringing the hammer down at €700,000 before it was confirmed by breeder Helmut von Finck that she had been bought back. The stud did however provide a notable result for Coolmore's freshman sire Saxon Warrior (Jpn) when lot 72 was signed for at €160,000 by Peter Brauer of Panorama Bloodstock.

The agent confirmed that the second foal of Faizeh (Ger) (Soldier Hollow {GB}) had been bought for owner Hans Bierkamper of Stall Mandarin. A grand-daughter of Von Finck's champion 3-year-old Flamingo Road (Ger) (Acatenango {Ger}), she will be trained at Mulheim by Yasmin Almenrader.

The Deutsches Derby winner Sea The Moon (Ger) may stand in Newmarket at Lanwades Stud but he retains his popularity in his native country and was the leading sire at the sale with 11 yearlings sold at an average of €64,364. Heading that group was a filly from the sire's breeder Gestüt Gorlsdorf (lot 75), who will go into training in England having been bought by Tom Goff of Blandford Bloodstock for €115,000.

“She'll be going to Newmarket,” said Goff. “The stallion is going great guns and she was a delightful filly, one of the nicest here, and she is out of a good Iffraaj mare.”

That mare is Gülden Gorl (Ger), who was a winner and listed-placed at two and is a half-sister to French listed winner Princess Charm (Ire) (Rip Van Winkle {Ire}).

There were a number of French trainers on the sales ground at Iffezheim and though Fabrice Chappet was not among them he will be receiving one of the leading lots of the day. Lot 60, the only yearling by France's champion sire Siyouni (Fr) in the catalogue was bought for €100,000 by Ghislain Bozo of Meridian International, who said that the Gestüt Brummerhof-bred son of the German 1000 Guineas winner Akua'da (Ger) (Shamardal) will go into training at Chappet's Chantilly stable.

Ongoing uncertainty over access for potential overseas buyers to the U.S. for the forthcoming Keeneland September Sale led to an increase in breeze-up pinhookers at BBAG.

Tom Whitehouse, Roger Marley and Johnny Collins all appeared on the buyers' sheet, as did Brendan Holland of Grove Stud, who made three purchases on the day. The trio included lot 135, a son of the Melbourne Cup winner Protectionist (Ger) out of a Soldier Hollow half-sister to the 2016 German Derby winner and second-season stallion Isfahan (Ger). The colt was bought in partnership with Marley of Church Farm Stables.

“We still don't know if we will be able to travel to Keeneland, so that's the reason I'm here and I'm glad I came,” Holland said. “I haven't been for a few years and there's a lovely selection of quality, scopey horses. I've bought three and I will definitely come back in the future.”

He added of the Protectionist colt from Ronald Rauscher's consignment, “I'll bring him back to Arqana in May. He's not a typical breeze-up horse, he's a quality staying horse. And while he's a staying horse in the making he looked quite together physically and I'm quite sure he'll be capable of galloping two furlongs in May. I loved him, he's such a lovely horse.”