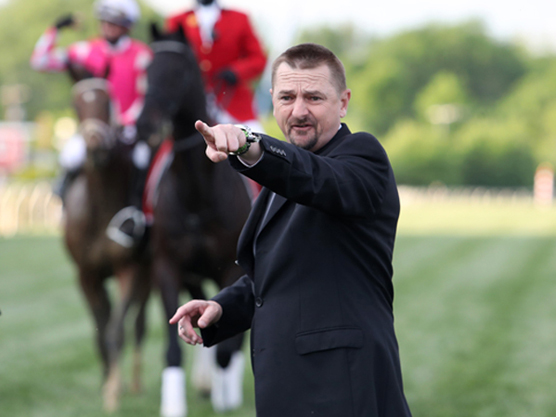 Fresh off the first Classic win of his career with his first Triple Crown starter, trainer Michael McCarthy joined the TDN Writers' Room podcast presented by JPMorgan Private Bank Wednesday morning. Calling in via Zoom from his Santa Anita stable as the Green Group Guest of the Week, McCarthy discussed getting Rombauer (Twirling Candy) to run his peak race in Saturday's GI Preakness S., whether he has any regrets about not running in the GI Kentucky Derby, what he learned from former boss Todd Pletcher and more.

“When the horses came to the quarter pole, I started getting excited and I almost had a bit of disbelief,” McCarthy recalled of his emotions Saturday. “The first thought that went through my head was, all right, the horse carried himself to the quarter pole and at least I can say he put up a respectable performance in a Triple Crown race. When they straightened up for home and Flavien [Prat] wheeled outside and they were three across the track, I could see the other two guys inside of him working. Flavien still looked like he was in a little bit of a rhythm and hadn't really gotten after him all that aggressively yet. Then, it was almost like my world went silent from the quarter pole to the wire. When he did strike the front and was pulling away from those horses, it was like an out-of-body experience.”

Asked about what he learned in his eight years working as an assistant to Pletcher, McCarthy said, “If you're around Todd, he leads by example. He shows up and gives it his best every day. He's got some things that I think he does better than anybody that I've been around. His attention to detail. His organizational skills. His big picture kind of thinking. This is something that he set out to do. As I read it, he had said to his parents at 12 or 13 that he'd like to be a racehorse trainer. So when you've got someone that's dedicated their life, like Todd has, to training racehorses, obviously he's left no stone unturned. It doesn't take thousands of races won or championships or Triple
Crown races to see the kind of person he is.”

Elsewhere on the show, which is also sponsored by Keeneland, West Point Thoroughbreds and Legacy Bloodstock, the writers reacted to the news that the New York Racing Association is suspending Bob Baffert and, in the Minnesota Racehorse Engagement Project Story of the Week, debated whether or not the punishment fit the crime for Linda Rice's suspension. Click here to watch the podcast; click here for the audio-only version.