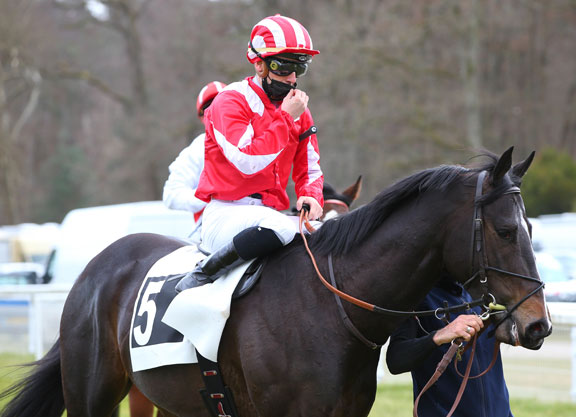 Miami Voice (Ire) (Shalaa) (lot 1), a debut winner at Fontainebleau on Mar. 12 for trainer Alessandro Botti, topped three lots sold during Arqana Online's latest sale on Friday. The 3-year-old colt was bought for €250,000 by Mandore International Agency and Meridian International, with Nicolas de Watrigant explaining the transaction was made on behalf of a partnership.

“We've bought him for a syndicate that is made up of Alain Jathiere, Gerard Augustin-Normand, Carlo Ancelotti and Sol Kumin”, de Watrigant said. “He'll continue his career with Alessandro Botti.”

Three of the six lots offered were sold during the sale. De Watrigant also swooped at €150,000 for another 3-year-old colt, Sotoro (Fr) (Toronado {Ire}) (lot 3), who was third in the Listed Prix Montenica on Mar. 18 for trainer Edouard Montfort. De Watrigant confirmed that Sotoro is for Sol Kumin's Madaket Stables. “He'll stay in France in view to running in the Prix Djebel if the ground is good because Edouard says he is in very good form,” de Watrigant said. “However, if it rains, he'll go straight to the United States.”

Boogie (Fr) (Sri Putra {GB}) (lot 4), second on his debut over hurdles at Compiegne in the Prix d'Essai des Poulains, was bought by Yannick Fouin for €80,000.

Arqana President Eric Hoyeau and executive director Freddy Powell said, “We would like to thank all the vendors and bidders that have trusted in us in the organisation of this sale, and we wish the best to the new owners with their purchases. We are satisfied overall, and Arqana Online is a good opportunity to showcase recent performers. The buyers were there, and once again it has proved that this type of sale represents a good opportunity between two physical sales.”