Mehmas's Persian Force To The Fore At Newmarket 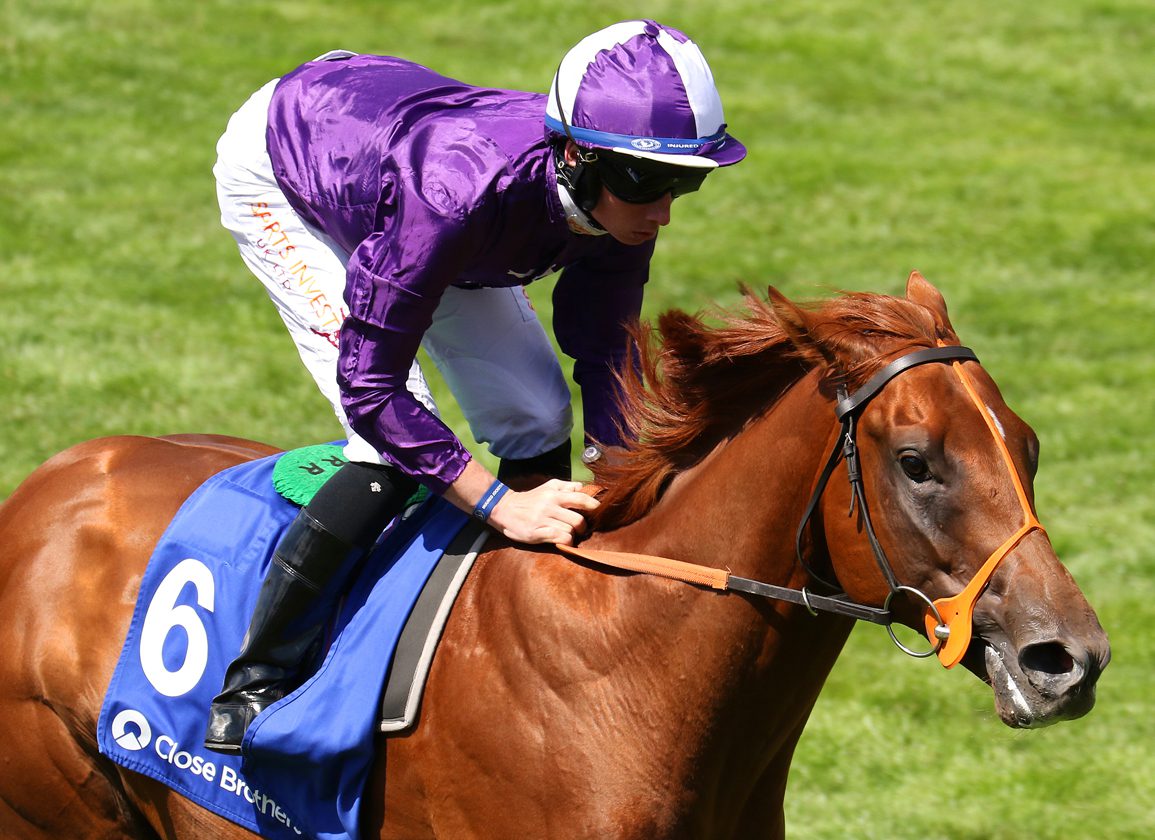 Amo Racing's €225,000 Goffs Orby yearling Persian Force (Ire) (Mehmas {Ire}–Vida Amorosa {Ire}, by Lope De Vega {Ire}) ran second to 'TDN Rising Star' Bradsell (GB) (Tasleet {GB}) in Royal Ascot's G2 Coventry S. last month and, in the absence of late scratching Little Big Bear (Ire) (No Nay Never), justified odds-on favouritism to claim a first stakes success in Thursday's G2 Close Brothers July S. at Newmarket. He had previously debuted with a win in a stellar renewal of Doncaster's Mar. 26 Brocklesby S. and doubled up in a May 14 Newbury conditions heat. Positioned in a handy third through halfway in this six-furlong test, the crowd's 1-2 pick was sent to the front underneath the stands' side rail passing the quarter-mile marker and kept on strongly under continued urging up the hill to comfortably outpoint Show Respect (Ire) (Showcasing {GB}) by 1 1/2 lengths for a career high. In so doing, he emulated his sire (by Acclamation {GB}), who ran second in the Coventry before landing this contest in 2016.

“I'm delighted that Rossa [Ryan] put the race to bed when he needed to and we deserved that,” said Richard Hannon after claiming a fourth edition of the contest. “He's done exactly the same as [sire] Mehmas in finishing second in the Coventry and then winning the July. I do think he will get seven furlongs. We don't have to go there immediately, but at the end of the year he will. His temperament is exemplary and he behaves as very good 2-year-olds do and I'm sure a step up would benefit. We might look at the [G1 Vincent O'Brien] National S. in Ireland and the [G1] Prix Morny next. My dad rang me after the Coventry and said he's a Guineas horse and I thought that was a little bit out of the blue, but that was the first thing he said to me. If a horse has a lot of speed he doesn't want to do that, but because he's so sensible he gives himself every chance of getting that [one-mile] trip. He has always given me a tingle, he got his just rewards today and I'm sure he's a Group 1 winner waiting to happen. He's an ideal horse to make a sire, he's a gorgeous looker and has everything that good horses do have. This fellow is probably one of the best 2-year-olds we've had in a long time.”

“It's brilliant for Mr Hannon and all the team because we were unlucky at Ascot and we got repayment for the horse here,” added Rossa Ryan. “Going forward, we have our black-type race under our belts now and a lot of the pressure is off, so it's a job well done. He's so straightforward and is a relaxed character, he takes you through the race and fills you with confidence. It was probably the smoothest run I've got in a Group race for a long time and it all fell into place today. A lot of credit has to go to the lads at home, I do the easy job and they put in all the hard work, so I couldn't be more grateful to the team. Richard is a master of 2-year-olds and, when this lad was building up to Royal Ascot, there was talk that he was as good as Canford Cliffs, so I was getting excited. It's great to have a horse with a proper engine underneath like he does and it's a good feeling.”

Runner-up Show Respect bounced back after running 11th in the Coventry to finish second at odds of 33-1 and trainer Brian Meehan reflected, “That is much of what we expected to happen in the Coventry. He got stopped in the gate at [Royal] Ascot and in these sort of races you need a clean break. He has been able to show today what I always thought of and what James Doyle thought of him at Leicester. He is in the [G2] Gimcrack [at York], the [G2] Richmond [at Goodwood] is there, and there is also the [G1] Prix Morny [at Deauville]. I'm really pleased and all these races will be on his radar now.”

Persian Force, from the family of dual Group 1-winning sire Danehill Dancer (Ire), is the second foal and stakes performer produced by an unraced half-sister to the dam of G3 Prix de Meautry victor Garrus (Ire) (Acclamation {GB}). The April-foaled chestnut if a full-brother to last term's G2 Richmond S. third Gubbass (Ire) and half to a yearling colt by Inns Of Court (Ire).

The exciting Persian Force (Mehmas) emulates his sire with victory in the Group 2 @CloseBrothers July Stakes at @NewmarketRace.

A seventh win in the race in the last 15 years for the Hannons! @rhannonracing pic.twitter.com/kXWkmrXLZH