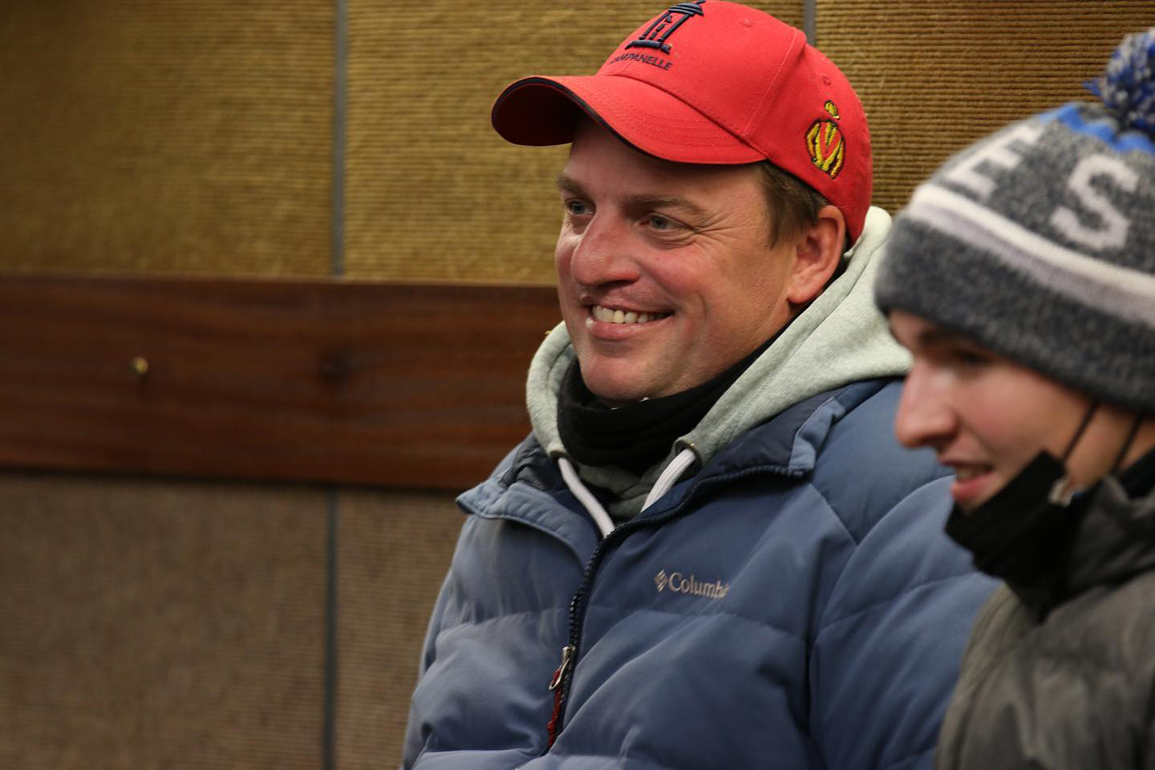 Roger O'Callaghan of Tally-Ho Stud, which was the leading purchaser at the Goffs November Foal Sale | Goffs

KILDARE, Ireland–The fourth and final day of the Goffs Foal Sale saw prices return to a more affordable level for the average working man or woman, and while there were no dizzying highs there was a decent level of trade for those present. With an extra day of foals compared to last year, Thursday was always going to test the resilience of the market and not surprisingly the clearance rate dropped a couple of points from the day before to 79% while the session topper, a Mehmas (Ire) colt, fetched €70,000.

Speaking after the sale, Goffs Group Chief Executive Henry Beeby said, “What an amazing business. As we progress through this depressing pandemic it is so uplifting to be involved in an industry that is always looking forward with positivity. And there is no better example of planning for the future than buying foals so, once again, we salute all the mighty foal pinhookers who have driven a trade of strength, depth and vibrancy over the last four days as they look for the next touch. The strong home team have been joined by a multitude of English and overseas speculators along with several end users, and the result has been intense competition and often frenzied bidding especially for those that stood out. Of course they have flocked to Goffs as our vendors have provided us with the cream of the Irish foal crop and we thank every one of them for their ongoing support of the Irish National Foal Sale. As ever our mantra is proven-'we can't do it without you'–and it is only with such a strong catalogue that we can deliver the kind of sustained demand that has clearly been in evidence from Lot 1 right through to the close of business today.”

He continued, “The top of the market proved robust with the new star Frankel leading the way for the second year in succession but bidding has been as keen on each day and at all levels to vindicate so many Irish breeders' choice of Goffs for their best. Indeed, a clearance rate of 82%, up from 76% despite a far bigger catalogue, makes the point and we are so pleased to have received so much positive feedback from so many about so much. We now turn our attention to our two day Breeding Stock catalogue, which reads better than for many a year following yet more wonderful support from breeders.”

Breeders who have supported Mehmas (Ire) since his retirement to Tally-Ho Stud have by and large been well rewarded, especially considering his 2020 covering fee was just €7,500, and lot 813 provided his breeder Golden Vale Stud with a great return when selling to Tally-Ho Stud for €70,000. The colt, consigned by Meadagh Stud, is a half-brother to five winners out of Ishimagic (GB) (Ishiguru) who is a half-sister to the U.S. multiple graded stakes winner Foxysox (GB) (Foxhound). Another son of Mehmas that proved popular was lot 947 from the McEnery's Vinesgrove Stud that sold to Paula Flannery for €56,000. The colt, bred by Billy & Paul McEnery, is out of Zambezi Queen (Ire) (Helmet {Aus}), who was bought by Billy four years ago for 16,000gns.

In what has been a fairly hectic week for the Tally-Ho team between purchasing, selling and monitoring the progeny of their stallions, the O'Callaghans also added a filly on Thursday by their own young stallion Kessaar (Ire) to the team. Lot 931 cost €44,000 and is a granddaughter of the G3 Dance Design S. winner Obama Rule (Ire) (Danehill Dancer {Ire}) and the dam, Trump Alexander (Ire) (Iffraaj {GB}), is a half-sister to this year's G2 Kilboy Estate S. winner Insinuendo (Ire) (Gleneagles {Ire}).

Derek Veitch's Ringfort Stud offered a Churchill (Ire) colt on behalf of breeder Rory O'Brien and lot 846 was snapped up by John Cullinan and Roger Marley for €68,000. The colt is out of the dual winner Mistime (Ire) (Acclamation {GB}) who was bought by O'Brien for 32,000gns three years ago and is proving a sound investment.

While many of these foals are bought as pinhook investments, many are offered as a result of a recent mare investment such as the above lot and another that reaped a very good return for a shrewd breeder was lot 960 from Ardrums Stud. The farm bought the dual winner Amber Spark (Ire) (Fast Company {Ire}), a half-sister to stakes winner Ventura Diamond (Ire) (Dandy Man {Ire}), two years ago for only 16,000 gns and sent her to Dandy Man (Ire) soon after for her first cover at an advertised fee of €15,000. The resulting colt went the way of Whiteoaks for €52,000 on Thursday.

As the session continued, Tom Monaghan gave €41,000 for a son of New Bay (GB) from Albany Stud, lot 899, a half-brother to this year's winning Kevin Ryan-trained juvenile Lady Raeburn (Ire) (Mehmas {GB}). Fifteen minutes later, Mark McStay gave €40,000 for lot 904, a son of Holy Roman Emperor (Ire) from Derrymore Farm. Michael Fitzpatrick of JC Bloodstock will be hoping his early purchase of lot 805, a colt by Profitable (Ire), will prove just that when he no doubt returns to a sale ring next year. The colt out of the unraced Iffa Red (Ire) (Iffraaj {GB}) cost Fitzpatrick €36,000 and was offered by Skara Stud.

Paul and Marie McCartan have honed their craft in both breeding and unearthing future stars, and their Ballyphilip Stud took home a son of US Navy Flag for €32,000. Lot 783 is the second produce out of the unraced Fascinated (Ire) (Champs Elysees {GB}) from the family of G1 Irish 2000 Guineas winner Saffron Walden (Fr).

The focus switches to breeding stock on Friday with a 10 a.m. start featuring exciting and sizeable drafts from several global breeding operations in addition to the dam of a triple Group 1 winner.