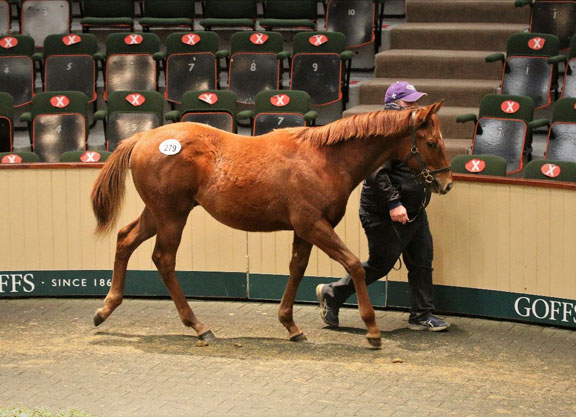 KILDARE, Ireland–The opening day of the rescheduled Goffs November Sale got off to a lukewarm start on Friday, with present circumstances understandably impacting trade. Last year's opening day was highlighted by a €100,000 session topper with seven foals selling for €50,000 or more, while 69.5% of the offered foals changed hands at an average of €17,957 and a median of €13,750. It was a slightly different story on Friday when only four foals reached or surpassed the €50,000 mark headed by a €75,000 session-topping Mehmas (Ire) colt. In total, 159 of the 254 (63%) offered foals changed hands for a total of €2,178,200, at an average of €13,786 and a median of €10,000. Allowances, of course, have to made for this being the most disruptive year in recent times, and it is expected that trade should take a leap forward in each of the next two sessions.

The most expensive foal of the day saw two branches of a very prominent bloodstock family battle it out with Tally-Ho Stud's Tony and Roger O'Callaghan eventually getting the better of Grangemore Stud's Guy O'Callaghan, who was standing with his brother Robert. Lot 279 is by the all-conquering Mehmas (Ire), who the successful bidders stand, and is the second produce out of the unraced Lope De Vega (Ire) mare Vida Amorosa (Ire), who was purchased in this ring in 2017 for just €1,200. Offered by Derek Veitch's Ringfort Stud on behalf of breeder Tom Lacy, the chestnut colt continued the fine run of form for Ringfort this year both on the track and in the sales ring.

“He'll come back for sale as a yearling and is a sweet colt,” Tony O'Callaghan said afterwards. “We sold his half-bother earlier in the year but this fella is a better model. The sire has been amazing and we are delighted to have him,” he added.

Mehmas was also responsible for a colt (lot 286) signed up by Paula Flannery late in the session for €40,000.

There has been plenty of publicity the past few weeks about Starfield Stud's new stallion Far Above (Ire), and a half-brother to that G3 Palace House S. winner led proceedings throughout much of the session on Friday when selling to Avenue Bloodstock's Mark McStay for €70,000. Lot 73, a son of Dawn Approach (Ire), was consigned by Clare Manning's Boherguy Stud and is out of the winning Shamardal mare Dorraar (Ire), whose group-winning sprinting son has been her only runner so far. After signing the buyer's docket Mark McStay commented, “He's a lovely horse and I've had some luck with the sire before. He's been bought for an existing client who might keep him to race rather than to sell next year.”

Boherguy has 11 foals catalogued this weekend and having got her sales week off to a good start, Clare Manning said, “We sold him on behalf of a client and he is a lovely, professional horse and it was great for our client to get a result like that. It's a nice start for ourselves as well and hopefully it will continue that way as we have some lovely foals to sell over the next few days.”

Mark McStay was back in the fray later on when he went to €60,000 to secure a colt by Dandy Man (Ire) offered by Arglo House Stud. Lot 208 is a grandson of the G3 Park Express S. winner Danehill Music (Ire) (Danehill Dancer {Ire}) and the dam Rip Van Music (Ire) (Rip Van Winkle {Ire}) has bred a winner from her first and only runner. “He's been bought for a pinhooking syndicate to be re-sold through Baroda Stud next year,” reported McStay. “He is a lovely foal, one of the standouts today and Dandy Man (Ire) has had another solid year. I didn't think I'd have to give as much for him as I did but hopefully he'll be worth it,” he added.

An attractive daughter of Sea The Moon (Ger) caught the eye of Grove Stud's Brendan Holland and was eventually knocked down to him for €50,000. The Castlebridge-consigned lot 86 is the first foal out of the unraced Exploitation (Ire) (Excelebration {Ire}), who is a half-sister to the stakes-placed Rythmique (Ire) (Casamento {Ire}).

Paul McCartan has a habit of striking gold with his pinhooks and it will be interesting to monitor the exploits both in the sales ring and on the track of lot 81. This Mastercraftsman (Ire) filly was bought by the McCartan's Ballyphilip Stud for €45,000. Offered by Galbertstown Stables, the Liz O'Leary-bred filly is closely related to GI Matriarch S. winner Off Limits (Ire) (Mastercraftsman {Ire}), while her yearling full-brother made 55,000gns at Tattersalls in October. The dam Eccellente Idea (Ire) (Excellent Art {GB}) also got off to a winning start as a broodmare this year when her second produce won as a 2-year-old in Norway.

Early in the day John Walsh acquired lot 15, a filly by Churchill (Ire), for €42,000. Offered by Oak Lodge & Springfield House Stud, the foal is the second produce out of Alambra (Ire) (Shamardal) a winner in Italy and placed four times in stakes company. The same price was given for lot 255, a colt by Footstepsinthesand (GB) purchased by Tally-Ho Stud.

The Murphys of Redpender Stud are noted judges of bloodstock, and they put their faith in lot 180, a colt by Fast Company (Ire). Offered by Ballyogue Stud, the first produce out of Nisma (Ire) (Montjeu {Ire}) from the family of group winner and Classic-placed Wind Chimes (GB) (Mastercraftsman {Ire}) was knocked down to Kilkenny based Jimmy Murphy for €40,000. “We haven't had one by the sire before but he's a proven stallion and this is a good foal with a nice pedigree so hopefully he can come back successfully next year,” he said.

The sale resumes on Saturday morning at 10a.m.