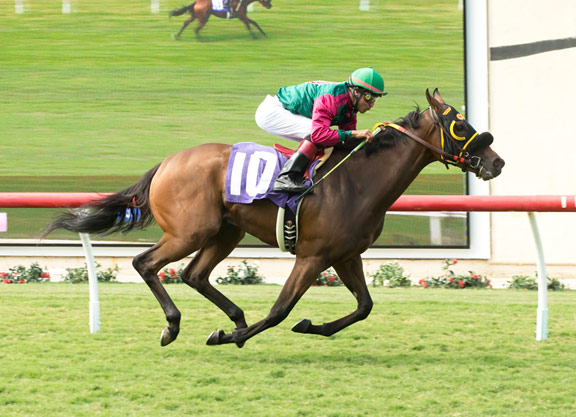 Medaglia Gold (Medaglia d’Oro) proved a surface switch was just what she needed with dominant performance to earn “TDN Rising Star” honors in her first try on turf at Del Mar Saturday. Breaking sharply from the outside post in this 10-horse affair while wearing blinkers for the first time, the 9-1 shot seized the early advantage, ticking off opening splits of :23.02 and :48.21 on a comfortable lead. Heavily favored Tequila Sunrise (Lemon Drop Kid) made an eye-catching move to sit second approaching the far turn. The chalk attempted to wear down the leader in the lane, but Medaglia Gold proved too good, pouring it on to win by 3 1/4 lengths.

Fading to sixth in her main track debut at Santa Anita May 12, Medaglia Gold could only manage seventh next out on the dirt there June 23, a race in which Tequila Sunrise finished second. She entered this test off a best-of-31 half-mile in :46 4/5 over the local main track July 25.

Medaglia Gold is a half-sister to Mei Ling (Empire Maker), MSW & MGSP, $522,383. Their dam Lochinvar’s Gold (Seeking the Gold), who is a half-sister to MGSW millionaire Master Command and MGSW Aurora Lights, has a yearling colt named Bernin’ Thru Gold (Bernardini) and produced an Empire Maker filly Mar. 5 of this year. She was bred back to Ghostzapper. This is also the female family of Grade I winners La Gueriere and Icon Project; and MGSW & MGISP Coolmore sire Munnings, who was represented by his second GISW Saturday in GI Alfred G. Vanderbilt S. victor El Deal.

Click for the Equibase.com chart, the free Equineline.com catalogue-style pedigree or VIDEO, sponsored by Fasig-Tipton.