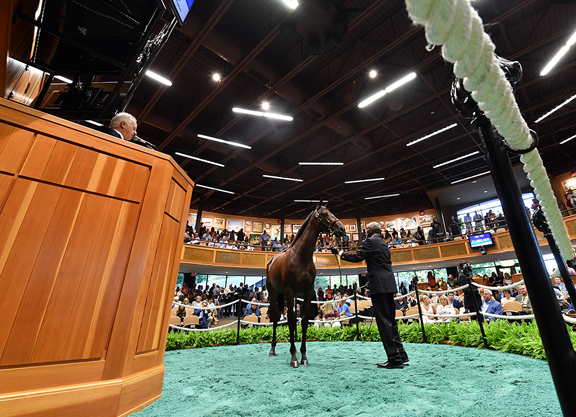 10th-Tampa Bay Downs, $20,000, Msw, 12-14, 2yo, f, 1mT, 1:37.71, gd.
CORRECTNESS (f, 2, Medaglia d'Oro–Veracity, by Distorted Humor), a $1-million Fasig-Tipton Saratoga graduate, was fifth after a troubled beginning in her one-mile bow over the main track at Laurel Nov. 8. Sent off the 6-5 favorite while moving to the lawn, the dark bay filly stalked pacesetting Duchess of Sussex (Palace of Malice) through fractions of :22.79 and :47.55. She loomed a threat turning for home and overtook the pacesetter with a furlong to run before bursting clear to win by 1 3/4 lengths. Hedonism (Curlin) closed late to overtake Duchess of Sussex for second. Bob Edwards's Fifth Avenue Bloodstock purchased Veracity for $460,000 at the 2016 Keeneland January sale. In foal to Justify, the mare RNA'd for $1.7 million at last month's Fasig-Tipton November sale. The mare's yearling filly by Medaglia d'Oro sold for $900,000 to Claiborne Farm at this year's Fasig-Tipton Saratoga sale and she also has a weanling filly by the Darley stallion. Veracity is a daughter of Claiborne's multiple graded stakes winner Yell (A.P. Indy), who also produced the dam of last year's GII Jim Dandy S. winner Tax (Arch) and the dam of multiple Grade I winner Elate (Medaglia d'Oro). Click for the Equibase.com chart or VIDEO, sponsored by Fasig-Tipton. Lifetime Record: 2-1-0-0, $13,400.
O-Lael Stables; B-Fifth Avenue Bloodstock (KY); T-Arnaud Delacour.