Medaglia d'Oro Filly Gets Up in Time in Santa Ysabel 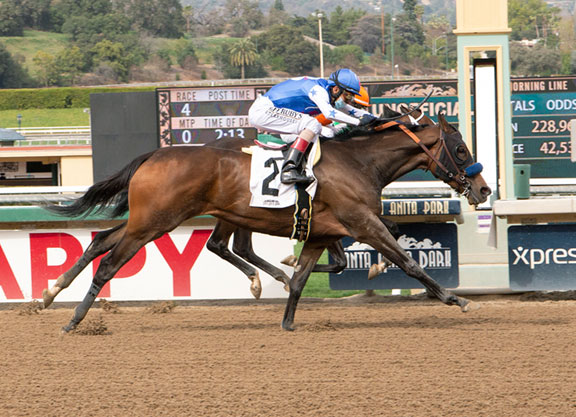 She had to be worked on early in Sunday's GIII Santa Ysabel S. at Santa Anita and seemed an unlikely winner as late as the eighth pole, but Baoma Corporation's Beautiful Gift (Medaglia d'Oro) produced a strong rally in deep stretch to nail Moraz (Empire Maker) in the last jump while making her first start since October.

A debut third behind re-opposing GSW barnmate Kalypso (Brody's Cause) going 5 1/2 furlongs Sept. 5 at Del Mar, the homebred stretched out to a local mile Oct. 23 and surged in the closing strides to get up by a half-length as the odds-on chalk.

Off as the 3-1 third choice in this four-horse group as Kalypso was knocked down to 3-5, the bay was away without issue and found a good spot in a pocketed third as the chalk dictated terms by a measured length through a modest :23.95 quarter. Stalking Moraz turned up the heat just a touch past a :48.13 half and those two appeared to leave Beautiful Gift behind as she was pushed along by John Velazquez at the top of the far turn. Moraz pulled even with Kalypso three furlongs from home and started to do the better work soon after, kicking clear into the final furlong. Beautiful Gift began to uncoil her best stride right about then, however, and had just enough racetrack to charge alongside the leader and get her head down first on the wire. Kalypso was third.

“I didn't think Johnny was going to get there and all of a sudden she kicked in, and she's really good,” said winning trainer Bob Baffert. “We gave her some time. She got really light on us. The further the better for her. I didn't think she got there until I saw the super slow-mo, but I'm just happy that they ran well. It's nice to get these fillies, it's all I have for the Oaks, so it's fun.”

With the victory, Beautiful Gift becomes the 150th stakes winner and 78th graded stakes winner for 22-year-old super-sire Medaglia d'Oro. She is the second black-type performer out of Sea Gift, who won her only career start as a 3-year-old in England, following Chitu, who captured the 2014 GIII Sunland Derby before running third, beaten less than a length by Shared Belief (Candy Ride {Arg}), in that year's GI Malibu S. Second dam Ocean Queen is a GSW half-sister to MGSW Dance Parade (Gone West), who in turn produced MG1SW marathoner Leading Light (Ire) (Montjeu {Ire}). A $450,000 RNA at Keeneland November in 2014, Sea Gift has a juvenile Arrogate colt named Mwari and was bred to Justify last spring.