Medaglia d'Oro Filly Gets the 'Gold' at Churchill 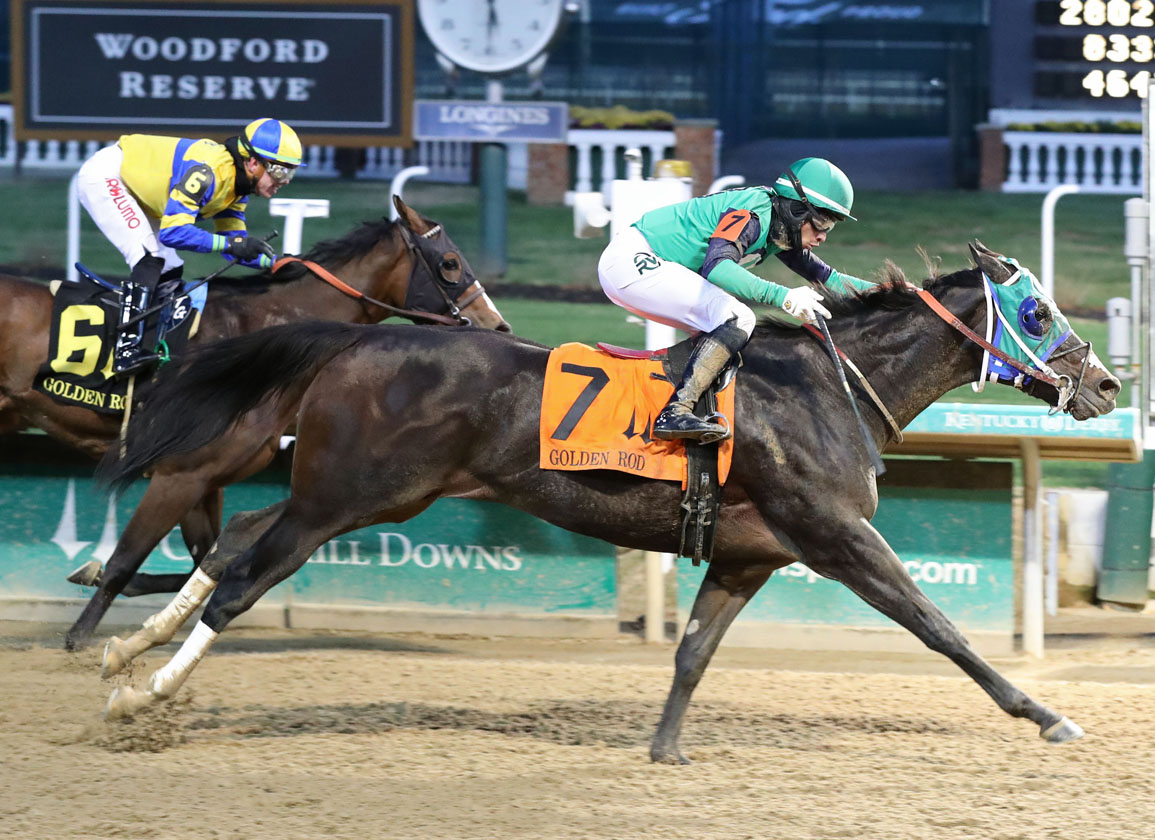 On this day 12 months ago, Robertino Diodoro saddled Cypress Creek Equine and partners' Keepmeinmind (Laoban) to a popular maiden-breaking victory in the GII Kentucky Jockey Club S. en route to a trip down the Triple Crown trail. Saturday afternoon beneath the Twin Spires, the same connections' Dream Lith (Medaglia d'Oro) officially served notice that she is on a GI Longines  Kentucky Oaks trajectory, overcoming a tricky trip to post a narrow success in the GII Golden Rod S.

When favored Rags To Riches S. winner Sandstone (Street Sense) failed to break cleanly, the blinkered Yuugiri (Shackleford) took full advantage, sprinting to the front and easing down the pace through an opening quarter in :24.04. Dream Lith settled well off the inside with cover in the slipstream of Secret Oath (Arrogate) while racing at the back of the leading group. By the time the field had reached the midway point, Sandstone had recovered to be in a stalking position and there were no real changes in the plot until Ramon Vasquez asked Dream Lith to improve four wide approaching the three-eighths.

Sandstone tried to take the race to the pacesetter with 2 1/2 furlongs to travel, but Yuugiri met that bid and took them into the lane, as Dream Lith continued with a menacing run four deep. Having shrugged off Sandstone in upper stretch, Yuugiri fought on bravely inside, but Dream Lith managed to sustain her momentum and edged clear late. Making her first start around two turns, 'TDN Rising Star' Famed (Uncle Mo), the half-sister to champion Essential Quality (Tapit), raced freely and in tight for the opening six panels and could not quite sprint with the leaders in the final stages.

Dream Lith belied debut odds of 36-1 to graduate at first asking at Saratoga Aug. 8, but endured a nightmarish trip and split the field in the GI Spinaway S. Sept. 5, finishing a dozen-plus lengths in back of likely champion Echo Zulu (Gun Runner). The beautifully bred dark bay was exiting an even fifth (dead-heat) in the GI Darley Alcibiades S. at Keeneland Oct. 8 and was adding blinkers for the first time in the Golden Rod.

The 158th worldwide black-type winner and 85th graded/group winner for Medaglia d'Oro, Dream Lith is also the 101st stakes winner and 53rd GSW out of a daughter of the late Street Cry (Ire).

Southern Equine and Hill 'n' Dale Equine Holdings paid $6 million for 2004 GI Ashland S. winner Madcap Escapade at the 2006 Keeneland November Sale in foal to Pulpit and the resulting produce became Mi Sueno, who was knocked down for $1.7 million at KEENOV in 2007 and carried the Southern Equine silks to victory in the 2009 GI Del Mar Debutante and GIII Sorrento S. Mi Sueno was sold to Katsumi Yoshida in foal to Frankel (GB) for $1.9 million at Fasig-Tipton November in 2013 and is the dam of four winners from six to race in Japan, including the filly she was carrying at the time of her sale, Group 3 winner Mi Suerte (Jpn).

Elle Sueno is the dam of a yearling full-sister to Dream Lith, a weanling half-sister by Justify and was most recently bred to Laoban.