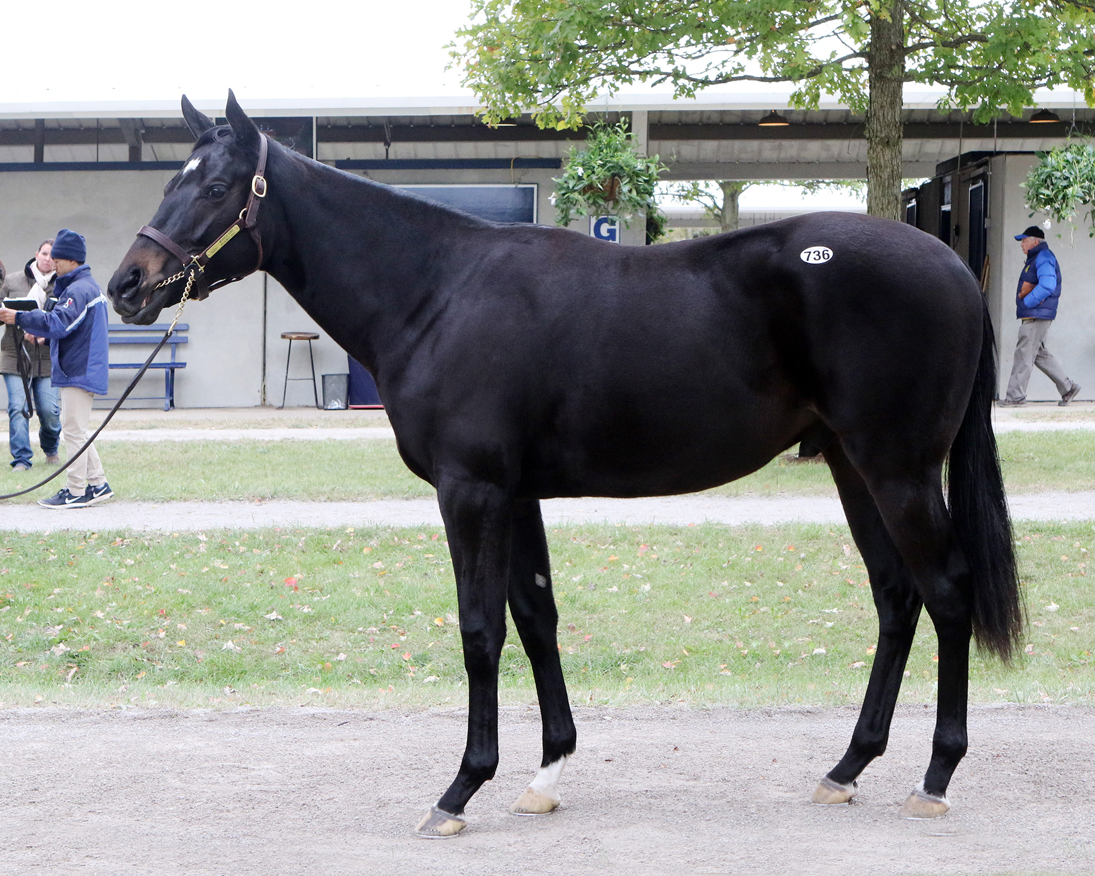 LEXINGTON, Ky – A colt by Medaglia d'Oro (hip 736) lit up the board early in Wednesday's power-packed third session of the Fasig-Tipton October Fall Yearlings Sale, selling for $700,000 to trainer Mark Casse. The price was the second-highest for a colt in the sales history.

“It was another successful day today,” Fasig-Tipton President Boyd Browning, Jr. said at the close of business Wednesday. “It sure helps to have some breakout horses. It creates enthusiasm and momentum throughout the day. Once again, it started strong and it finished strong.”

“It's the same story,” Browning said. “There was great competition for the horses that were deemed desirable. Most of the buyers out there, particularly at the upper end are walking around grumbling that they keep getting beat, but nevertheless it's the same marketplace we've been living in. It's not easy to sell some of the horses and it's really fun to sell a small percentage of the horses. Overall, it's a fair marketplace. I think it's been really encouraging the number of upper-end buyers who have participated in the sale in the first three days. But it's also been encouraging to see the breadth of buyers below $20,000 because they have literally been active from all over the world. And we expect that trend to continue tomorrow. So it's a worldwide buying audience and a pretty strong marketplace.”

Chris Baccari's Baccari Bloodstock sold the Medaglia d'Oro topper in partnership with SF Bloodstock, as well as the day's second-highest priced offering, a Curlin colt for $400,000.

“I think it's a great place to sell horses,” Baccari said of the October sale. “Buyers can get bargains here and sellers can get rewarded if they bring a nice horse here. It's a level playing field.”

The October sale continues with a final session beginning at 10 a.m. Thursday.

Trainer Mark Casse, doing his bidding outside, saw off pavilion challenges that included a phone bidder and trainer Ken McPeek to secure a colt by Medaglia d'Oro out of Broadway Gold (Seeking the Gold) for $700,000 on behalf of a partnership early in Wednesday's third session of the Fasig-Tipton October sale.

“He has a big pedigree and he's a pretty horse,” Casse said. “You don't see too many mares that can produce good horse after good horse and she does. He's an athlete with a pedigree. Now we just have to get him to run fast.”

The yearling was consigned to the October sale by Baccari Bloodstock. His breeder, SF Bloodstock, purchased Broadway Gold, with this colt in utero, for $950,000 at the 2015 Keeneland November sale. He was bought back for $475,000 at last month's Keeneland September sale.

“I saw him in September and I liked him then,” Casse said. “But I probably liked him better now. I think the horse has changed and Medaglia d'Oro's colts have been strong recently, which never hurts things. Gives you a little more faith.”

SF Bloodstock's Tom Ryan said, “We're delighted with that result. It's very exciting to have an SF-bred entering the Casse training program. This colt is typical of the good Medaglias, loads of quality with a great mind and a flawless pedigree to match. Chris Baccari is an expert horseman who has a history of producing top-class horses.”

Baccari wasn't surprised by the results.

“I knew he would be popular and we had a lot of end-users that were on him,” Baccari said of the sale-topping yearling. “He is the kind of horse, with his pedigree, especially on the bottom side, if he becomes a useful horse, he is worth $15-20 million. And he has the license with the pedigree and the look to do that.”

Of the lively bidding match for the yearling Wednesday, Ryan added, “I was impressed with the depth of the buying bench here. This colt had admirers from coast to coast and that translated into spirited competition at sale time.”

Casse struck again later in the session, going to $270,000 to secure a Sky Mesa colt on behalf of Tracy Farmer. Out of Darling My Darling (Deputy Minister), hip 886 is a half-brother to recent GI Darley Alcibiades S. winner Heavenly Love (Malibu Moon). Bred by Debby Oxley, who campaigns the Casse-trained Heavenly Love, the yearling was consigned by Darby Dan Farm.

“He is a good representation of Curlin,” Lanni said of the yearling. “He looks like a precocious, really athletic horse. He's a lovely horse. And I'm happy to have him.”

The chestnut colt is out of Eden's Storm (Stormy Atlantic) and is a half-brother to stakes placed Seeking Paradise (Blame) and from the family of Theatrical (Ire), Paradise Creek and Forbidden Apple.

Hip 950 was consigned to the October sale by Baccari Bloodstock, which purchased him for $325,000 at the 2016 Keeneland November sale. The colt RNA'd for $425,000 at last month's Keeneland September sale.

“I thought he was the best one I could buy, physically, by Curlin,” Chris Baccari said of the colt's appeal as a weanling. “Those are the kind of horses I go after.”

Baccari sold the top two lots during Wednesday's session of the October sale and both yearlings were buy-backs from the September sale.

“Part of it was bad book placement and the other part was that we had a horrible place to show in Book 2,” Baccari said of the difference in results.

Eclipse Thoroughbred Partners' Jacob West acquired a filly by Medaglia d'Oro from the Lane's End consignment Wednesday in Lexington, going to $350,000 to secure the daughter of

“She is a Medaglia d'Oro out of a Grade I winner,” West said after signing the ticket on hip 967. “Medaglia d'Oro speaks for himself; Bolt d'Oro, Songbird, Elate, New Money Honey. The list goes on and on and on–I think he's going to have six horses in the Breeders' Cup this year. They don't come along like that very often, being by him and being out of a Grade I winner. She was an incredible physical and she moved like a cat. She had all the physical attributes we look for in a top horse. “

Hip 967 is bred on the same cross as Bolt d'Oro, as well as Eclipse's 'TDN Rising Star' Montauk (Medaglia d'Oro), who captured his career debut by 11 1/4 lengths at Belmont Oct. 7.

The filly was bred by Dr. Christoph Berglar and RNA'd for $400,000 at the Keeneland September sale.

A chestnut filly by Candy Ride (Arg) will be joining the barn of trainer Jeremiah Englehart after Travis Durr of Webb Carroll Training Center acquired the yearling for $265,000 on behalf of an undisclosed client Wednesday at Fasig-Tipton.

“She is a big, strong, nice filly,” Durr said of hip 770. “These horses are bringing good money in this market. For the good horses, it's really competitive.”

The yearling, consigned by Bluewater Sales, is out of Cat Fight (Storm Cat), a daughter of champion Wandesta (GB) (Nashwan). Breeder Mike Abraham purchased Cat Fight, in foal to Congrats, for $45,000 at the 2011 Keeneland November sale.

“She was a young Storm Cat mare at the time out of a champion mare,” Abraham recalled of his acquisition of Cat Fight. “They weren't making any more Storm Cats and she was a big, pretty mare. I was willing to pay $100,000 for her–so I got her for less than half price.”

Abraham sold the Congrats colt purchased in utero, who became stakes-placed Harmonic, for $87,000 at the 2013 Keeneland Janaury sale. The mare's Street Boss filly, Island Reward, sold for $120,000 at the 2014 Keeneland September sale. With no reported foal this year, Cat Fight was bred back to Candy Ride.

“She's done really well for us,” the breeder said. “We have missed a couple times, but she is back in foal to Candy Ride and I think she's carrying a full-sister.”

Of hip 770, Abraham said, “I loved her. When I saw her [Wednesday], I thought she looked better than she did three days ago. She really stood up and looked good. We didn't sell her earlier because she had a few little issues. And they kill you for little-bitty somethings and she outgrew all of her stuff.”

Asked for his secret to success with moderately priced mares, Abraham laughed, “I'll never tell. You'll have to read my book.”

He added, “I certainly look for pedigree–that's the first thing I look for–and of course you look for the individual. Good pedigrees in foal to nice horses. And we've done really well through the years.”

Abraham stands the stallion Laugh Track at Double LL Farm in New Mexico and has a 35-head broodmare band in the state, in addition to his 30 mares based in Kentucky.

“We typically breed to sell,” he said. “There are some that, if we keep, we'll race. We had a good year racing in New Mexico with some of the babies that I've bought back in sales the last few years. We will race them, but we breed to sell. That's the main thing.”

Good Day for the Gallaghers

Brendan and Olive Gallagher of Frankfort Park Farm enjoyed a strong day in the sales ring Wednesday at Fasig-Tipton. The couple are co-breeders of recent GIII Iroquios S. winner The Tabulator (Dialed In) and sold the colt's half-sister by Take Charge Indy (hip 1033) for $200,000 to Tracy Farmer during the third session of the October sale. The Gallaghers had bought out a partner on the filly over the winter, purchasing the short yearling for $6,000 at the Fasig-Tipton Kentucky February Sale.

“I owned the filly with a partner and I bought out the partner, who was getting out of the business,” Brendan Gallagher explained of the yearling. “So I owned a part of her previously.”

The partnership also sold the yearling's dam, Fly to the Stars (Giant's Causeway), for $21,000 at this year's Keeneland January sale. The yearling went through the ring at that auction as well, but was led out unsold at $9,000. Gallagher decided to buy the filly outright when she returned to the ring in February.

“Nobody wanted a Take Charge Indy last year, but we bred Take Charge Paula as well, she's a stakes winner, so we were kind of believers,” he said of the purchase. “[The yearling] went through the ring at January unsold and then we put no reserve on her [in February] and I bought her for $6,000.”

Since that February purchase, The Tabulator sold for $460,000 at the OBS March sale and is now three-for-three for owner Carolyn Wilson after his victory in the Sept. 16 GIII Iroquois S.

Gallagher said he expected a good result when the Take Charge Indy filly went through the ring as part of the Lane's End consignment Wednesday.

“She was beautiful. She's a lady,” Gallagher said of the yearling. “Erika [Goncalves], our farm manager, does a great job with them and we were pretty confident that she would bring the money.”

Earlier in Wednesday's session, the Gallaghers sold a colt by Tapizar (hip 935), bred in partnership with Michael Hernon, for $175,000 through the Gainesway consignment. That yearling is a full-brother to Monomoy Girl and the partners purchased Drumette (Henny Hughes) with that now unbeaten juvenile filly in utero for $75,000 at the 2014 Keeneland November sale.

“Listen, it's working out great,” Gallagher laughed. “We've been in the horse business a long time and when it gets good, it's great. We're just in a bit of a proper patch at the moment.”