McPeek Stacked With Fillies For 2021 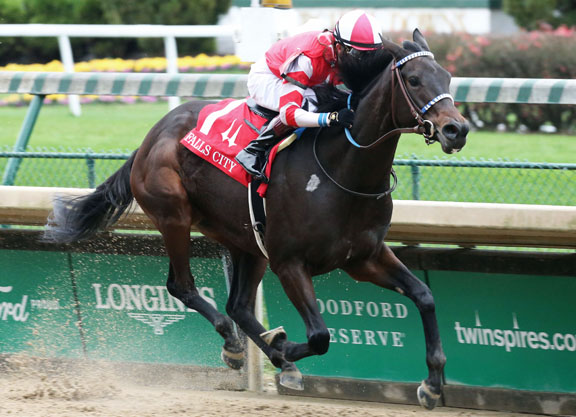 “They're both two-turn fillies,” McPeek told the Oaklawn notes team. “I think it's ideal timing for both of them to see where they fit in the scheme of the Oaks and the 3-year-old filly division. Olivia won a nice little race out at Remington and Tabor Hall's shown quality. They're both doing well and the timing was good.”

The best may be yet to come, however, as McPeek is also readying last year's GIII Remington Park Oaks and GII Falls City S. victress Envoutante (Uncle Mo) for an appearance in the GII Azeri S. in Hot Springs Mar. 13. That race is the final local prep for the GI Apple Blossom H. Apr. 17, an event that could also attract the McPeek barn's heaviest hitter, GI Preakness S. and GI Alabama S. heroine Swiss Skydiver (Daredevil), who is likely to make her 4-year-old debut in the GI Beholder Mile S. at Santa Anita Mar. 13.

“Her last race was a beast race,” McPeek said Wednesday afternoon, referring to Envoutante's six-length romp in the Falls City. “She and Swiss have been getting ready down here [in Florida] and I've been trying to keep them separated. I made a decision and it looks like Swiss is going to California. It's a high-level problem. I'm pretty heavy on fillies this year, for some odd, unusual reason.”

Swiss Skydiver ended her sophomore season on a down note, finishing well behind Monomoy Girl (Tapizar) in the GI Breeders' Cup Distaff Nov. 7. When asked if she might be a candidate for the Apple Blossom, McPeek said: “Yeah, it's possible. I think the timing is pretty good for both of them to run back there.”

Though McPeek has never won the Apple Blossom, the outstanding Take Charge Lady (Dehere) was just run down in the waning strides of the 2003 renewal by reigning Horse of the Year Azeri (Jade Hunter).