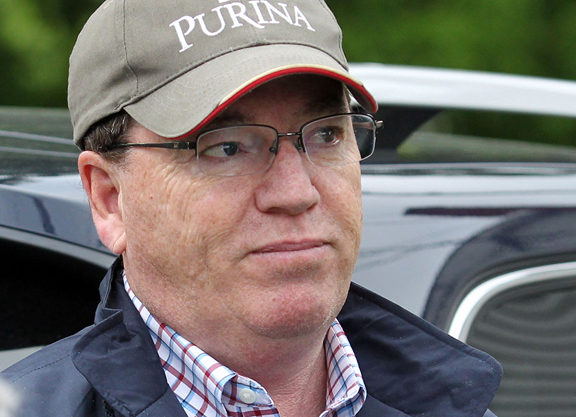 Despite being one of the sport's most successful trainers, Kiaran McLaughlin has decided to switch jobs and has signed on with Luis Saez to be his agent. McLaughlin will continue to train through the end of this month, before going to work for Saez Apr. 1.

“I was approached about taking Luis Saez' book and after speaking to my wife, my children, my family, I felt like this was right thing to do,” McLaughlin said. “I am very excited. Luis is a great kid and a great jockey.”

McLaughlin admitted that the decision to leave training had a lot to do with the frustrations involved with that job. In February, he announced that he would no longer be based in New York and would instead have divisions in Kentucky and at Monmouth Park. He is among a group of New York trainers that were fined last year by the New York Department of Labor for violation of minimum wage requirements. McLaughlin's fine was $304,646.

“It's not so much about how much money I will be making,” he said. “It's more about what I've gone through with the Department of Labor, the regulations and H-2B visas. You try to do things right, but it is very expensive and difficult to make things work properly. The matter of fact is that the horse racing industry needs to be categorized as agricultural. We are at the barn 24-7 and are dealing with live animals. So I'm not sure why we don't fall under the agricultural category. If we were, it would help with all the Department of Labor issues, punching in, punching out, keeping track of every minute. We do that, but sometimes there are little hiccups. Right now, you can't charge enough to train a horse and make it work. Every trainer is just trying to break even and not lose money. It's very hard to do that.”

McLaughlin began to make a name for himself when working as an assistant to D. Wayne Lukas. He left Lukas in 1992 to become the agent for Chris Antley. He returned to training the following year when setting up a stable for the Maktoum family in Dubai.

“In many ways, the business has been great to me and the owners have been great to me,” he said. “It's been almost 27 years that I have been with Shadwell and Godolphin. Sheikh Hamdan has been like a fatherly figure to me. He is an outstanding man. Sheikh Mohammed has been great to me and my family. This was an emotional and tough decision. One of the best things about this is that I get to stay in business and stay involved with game I love so much. I'll be watching races every day and trying to put Luis Saez on the fastest horses. I'll be talking to all the other trainers and owners. I'm excited about it.  Luis is a wonderful guy with a wife and three children. This is an exciting new chapter in my life.”

From 1995 to the present, McLaughlin has sent out 1,577 winners in North America. In 2019, he had 98 winners and his stable earned $5,637,168, which put him in 22nd place among all trainers. He has compiled 176 graded stakes wins. He pointed to Horse of the Year Invasor (Arg) (Candy Stripes) when asked what he will remember most about training.

“Invasor is the top memory for me,” he said. “To win the [G1] Dubai World Cup for Shadwell and Sheikh Hamdan was a great accomplishment, no doubt about it. All the graded stakes wins were fabulous. It was a great time and I had a great relationship with my owners and everyone else. It's a big family on the backside. It's great that I will still be involved. This is definitely something I lost some sleep over. I realize that 100% of all trainers would have loved to have been in my spot over all these years.”

McLaughlin said some of his owners have already moved their horses to other trainers. He added that his former assistant Joe Lee, who is based in New York, will also get a handful of his horses.

Saez, who is coming off a win aboard Maximum Security (New Year's Day) in the $20 million Saudi Cup, is a fast rising star in the business. The 27-year-old native of Panama was seventh in the nation last year in earnings with $18.2 million. He is currently second, behind Irad Ortiz, Jr., in the standings at Gulfstream Park.