McKinzie's Journey from Juvenile Star to the Gainesway Roster 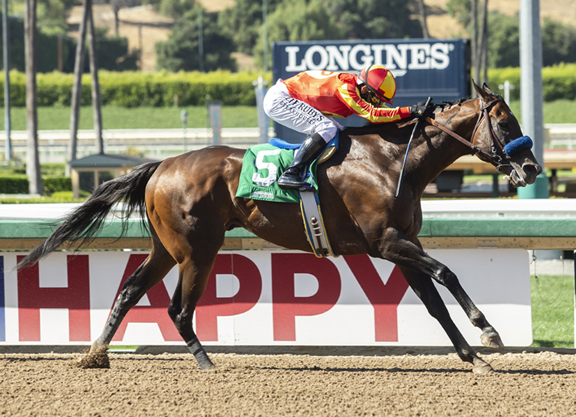 Since his maiden-breaking 'TDN Rising Star'-worthy juvenile debut, McKinzie had caught the eye of Gainesway Farm.

But according to Gainesway's Director of Stallion Sales and Recruitment Sean Tugel, the son of Street Sense had the attention of nearly every top stud farm in the country.

“He was on everybody's radar from the very beginning,” he said. “Any time you see one win first time out from Bob Baffert's barn, you have to recognize it.”

McKinzie's resume only improved from there over the next three years before he retired in October of this year, cementing his place on the Gainesway stallion roster.

A $170,000 Keeneland September purchase by Karl Watson, Michael Pegram and Paul Weitman, McKinzie was named in honor of Brad McKinzie, an executive at Los Alamitos and longtime friend of Baffert.

Following his maiden victory, a disqualification elevated the colt as the winner of the GI Los Alamitos Cash Call Futurity S., leaving him undefeated as a juvenile.

While he continued the winning streak in his next start in the GIII Sham S. at three, the bay was later shelved and forced off the Classic trail, but then returned with a vengeance for the second half of his sophomore season in the GI Pennsylvania Derby, and later a near five-length win in the GI Malibu S.

“He showed his extreme ability when he won the Pennsylvania Derby at a mile and an eighth, and then came back and won the Malibu at seven furlongs, showing that versatility,” Tugel said. “The Malibu was certainly one of his marquee victories. He exploded down the lane at the eighth pole and separated himself from a deep group of horses. You see very few horses able to separate themselves from a field going seven furlongs like that, and it just showed his brilliance.”

“He ran 11 triple-digit Beyer Speed Figures, but his Whitney victory was his career best. He defeated multiple Grade I winners, and he did it easily,” Tugel said.

With Grade I wins at two through four, McKinzie came back this year at five and added the GII Triple Bend S. to his resume. He retired with earnings of well over $3 million, running either first or second in all but two of his 10 Grade I starts and retiring as a seven-time graded stakes winner.

“I think in today's world, we're so quick to put horses up on a pedestal,” Tugel observed. “This is a great opportunity for our industry to breed to a horse that maintained the highest level of performance over three full racing years.”

Tugel said he believes McKinzie's pedigree will give the new sire every chance at success.

“He is the fastest son of Street Sense, and to be the best of a sire line is something special,” he said. “He has the bottom side to make us believe that he's going to have fast, precocious 2-year-olds. He brings that soundness, that size, that scope and versatility. And that's something we need in this breed. I think it sets him up for a big chance to be a very successful stallion in the future. He's certainly one of the most exciting stallion prospects we've had at Gainesway in a long time, and we're very excited to see what he can produce for us.”

Breeders are now getting their first looks at the new stallion, and Tugel said he's been well received.

“He's an elegant horse. He comes out and shows all the class he showed on the racetrack. He stands there like an absolute picture. You can see in his movement when he walks across the ground, it's the same movement he had to make him a multiple Grade I winner. Even though he is a big-framed horse, that athleticism and lightness of his feet is a great attribute. He's extremely popular and we're very excited for the book of mares he's going to get this year.”