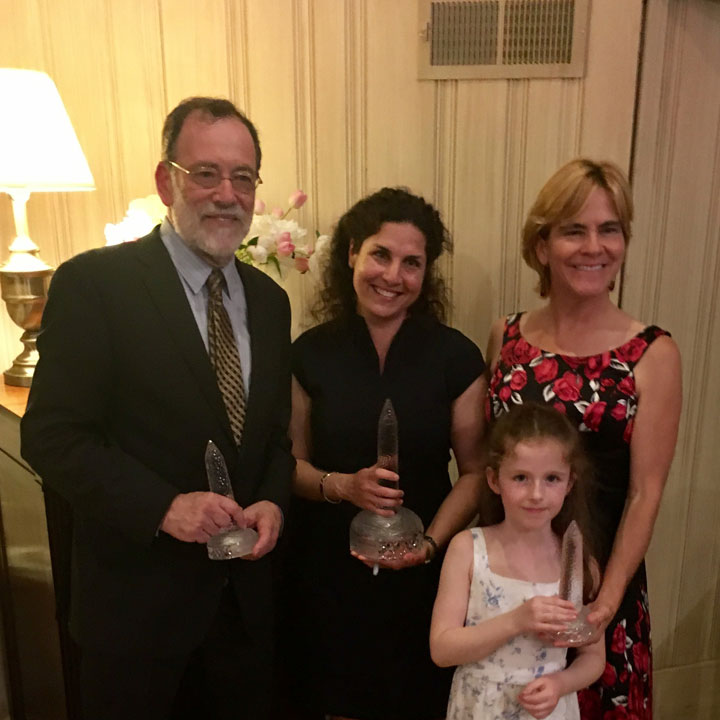 In front of a packed crowd, Eliza McGraw was named the winner of the 2016 Dr. Tony Ryan Book Award for “Here Comes Exterminator! The Longshot Horse, the Great War, and the Making of an American Hero.” She received a $10,000 cash prize as well as a Tipperary crystal trophy from Shane Ryan, the president of Castleton Lyons, during a reception at the farm on Thursday evening.

“I want to thank you all very much,” said McGraw. “It really is something to be in this room with this many people who care about horses and books. I feel like this is another victory for Exterminator, and he was a huge part of our history. Now, I really feel like he won't be forgotten.”

Published by Thomas Dunne Books, McGraw's work takes a look back at the 1918 Kentucky Derby winner, who was affectionately known as Old Bones. One of only handful of geldings to take the Run for the Roses, Exterminator won 50 races during his career and in the process became a cultural icon following World War I.

“There is a feeling when you start writing about historic horses that you almost dip in and out of the century that you are in and the century you are writing in,” said McGraw, who has also written for the New York Times and Washington Post as well as authored two academic books. “I sometimes have this feeling if I got plunked down at Exterminator's barn, I could probably get by.”

One of her inspirations for writing Exterminator's story was a book from her childhood, “Old Bones the Wonder Horse” by Mildred Mastin Pace.

“The horse girl cliches is alive and well and true,” said McGraw. “When I first read “Old Bones the Wonder Horse” as a child, he looked very much to me like the ideal horse. When I was a kid, my family always teased me about my somewhat limited interests because they were horses and books. That has not changed. My husband will often ask the kids where I am, and the answer is usually the library or barn.”

The two other finalists for the award were “Old and New Friends” by Barbara Livingston, which chronicles the lives of 100 retired racehorse through both words and photography; and “The Great Sweepstakes of 1877: A True Story of Southern Grit, Gilded Age Tycoons, and a Race That Galvanized a Nation” by Mark Shrager, which looks back at one of the most historic match races ever held in America.

Livingston and Shrager each received $1,000 and a Tipperary crystal trophy for being finalists. They were also in attendance to receive their prizes and discuss their works in front of a crowd of Thoroughbred enthusiasts that included the likes of Alex Waldrop, the president and CEO of the National Thoroughbred Racing Association; Anne Hardy, the executive director of Horse Country; and Michael Blowen, the founder of Old Friends.

The judges for the award were last year's winner John Carter, broadcast journalist Caton Bredar, and Kay Coyte, who is the lead judge and former managing editor of the Washington Post-Bloomberg News Service.

“As we are starting our second decade here, I also looked back at the first 10 winners,” said Coyte. “I think a remarkable thing about this book award is how broad it is, and how much variety there is. We have Shane Ryan to thank so much for keeping it going.”

In 2006, the Castleton Lyons-Thoroughbred Times Book Award was established as a way to acknowledge and reward books on Thoroughbred racing. Dr. Ryan, who founded Irish-based airline Ryanair and Castleton Lyons, died the following year, and the competition was renamed in 2008 in his honor. His son Shane took over the farm, and with it, the book award. This year, he called on his young daughter Toni to help him announce the winner.

The TDN's T. D. Thornton is a previous winner of the Ryan book award, having been recognized in 2007 for his book “Not By a Long Shot: A Season at a Hard Luck Horse Track.”