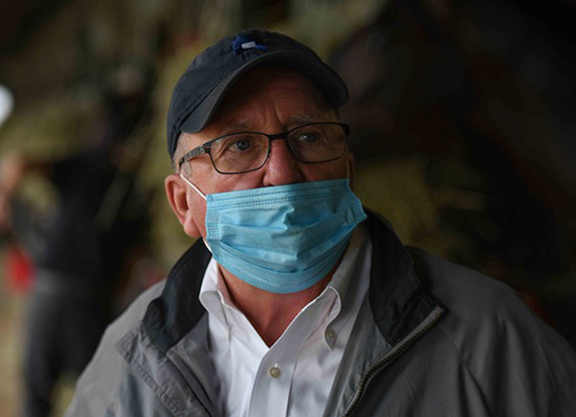 McGaughey, a member of racing's Hall of Fame since 2004, will try for his fourth victory in Saratoga's premier dirt race for older horses Saturday with William Farish's 4-year-old homebred colt.

With Whitney winners Personal Ensign (1988) and Easy Goer (1989), both Hall of Famers, and Honor Code (2015) on his vast stakes resume, McGaughey, 69, spent a fair amount of time talking about the present and the past.

Though the Whitney field is the smallest since Personal Ensign beat just two others 32 years ago, McGaughey said it is deep in quality and will be a big test for his late-runner. Tom's d'Etat with Joel Rosario up, is the 6-5 morning-line favorite in the “Win and You're In” race for the GI Breeders' Cup Classic.

Improbable and Code of Honor are listed at 5-2. On June 27, Tom's d'Etat extended his win streak in the GII Stephen Foster at Churchill Downs.

“It won't be easy,” he said. “I've just got to hope that Code of Honor runs a monster race. It will be kind of interesting to see what the tactics are with only five. I know where I'm going to be, but I'm not sure what the others are going to do or how much they're going to press. You know that Joel isn't going to do anything stupid. Hopefully, he'll be up there fairly close, as he was, I think, in the Stephen Foster and we are able to pick him up. It's a pretty solid field. I feel like we're lucky to be in it. If he runs his race, they'll know he is there.”

“I have a lot of confidence,” McGaughey said. “He was so fresh last year for the Travers. I think it will be a little different kind of a race this year because he ran on June 6 [winning the GIII Westchester] and ran back in the Met Mile. He's bounced out of it good. His two works here were good. I've got confidence that he will run his race. If that is good enough, we'll get our picture taken. If not, we'll figure out something else.”

McGaughey was in his third year training for Ogden Phipps and his family when he ran Personal Ensign in the Whitney. She had recovered from an injury–a broken bone in a rear leg–that had kept her away from the races for almost a year. The 4-year-old filly faced two very capable runners, Gulch and King's Swan, and McGaughey said he had some concerns about asking her to face males over a sloppy track.

“The rain came up early, so I came over here to kind of see what was going on with the track,” McGaughey said. “They ran a sprint race earlier in the card–I remember Angel Penna had a horse in there–and it looked like to me that the water was just on top of the track. I told Mr. Phipps that I thought they were going down into a drier track and I didn't think it would be a problem. I knew she didn't mind the mud.”

Personal Ensign prevailed by 1 1/2 lengths over Gulch at 4-5 and is the last female to win the Whitney.

“She was able to run an incredible race,” he said. “It's funny, one of the numbers guys called me earlier in the week and said 'She can win this race if she gets the perfect trip.' If you remember, [jockey Angel] Cordero and King's Swan pushed her way out in the middle of the racetrack. She was out there kind of the whole way, but she was good enough to win.”

Three months later, Personal Ensign finished her career at 13-0 record with a heart-stopping victory by a nose over Kentucky Derby winner Winning Colors in the GI Breeders' Cup Distaff at Churchill Downs.

McGaughey said the Whitney was part of the plan to silence some critics and put her at the top of the older female division.

“I remember on the West Coast they said, 'She only wins at Belmont.'” McGaughey said. “So I said, 'Well, I'll take care of that part of it.' We took her down to Monmouth and she won the Molly Pitcher from here to across the street. Mr. Phipps was anxious to start her against the colts and I thought this was the perfect place to do it. In case we were wrong and it took too much out of her, we would still have enough time for the fall racing. We thought this was a pretty good opportunity. Plus, he didn't want to duck and run to some place, like Chicago, to run against the colts. He wanted to do it here.”

The following summer, McGaughey became the first trainer to win-back-to-back Whitneys in over 50 years with the 3-year-old Easy Goer. After runner-up finishes to Sunday Silence in the Kentucky Derby and the Preakness, Easy Goer beat Sunday Silence by eight lengths in the GI Belmont S.. Rather than prep him for the Travers in the Jim Dandy, McGaughey put him in the Whitney and ran Fast Play in the Jim Dandy. Easy Goer, the last 3-year-old to win the Whitney, won as he pleased by three lengths over Clever Trevor at 1-5.

“We knew that Easy Goer was an exceptional horse,” McGaughey said. “He came out of the Belmont–and I wouldn't have done it–but he gave you the feeling that you could run him back in two weeks. We obviously didn't do that, but we pointed for here. Mr. Phipps was anxious to do something of that sort and we had an alternative, too, with Fast Play, who we could run in the Jim Dandy. Obviously, it was the right decision and I thought it was the right decision going in, too.”

Hall of Fame jockey Jacinto Vazquez provided some drama by pinning Easy Goer along the rail behind the pacesetter for a while, but he took advantage of an opening.

“He had to come through there, but he was in a little bit of trouble,” McGaughey said. “I can remember watching Pat Day and thinking, 'He's got a lot of horse. Whenever it opens he's going to be there.'”

McGaughey was second to Criminal Type with Dancing Spree by 1 1/2 lengths in 1990 and Out of Place was second by a nose in 1992. He added his third Whitney five years ago with Honor Code, who edged Liam's Map by a neck at 7-2. It followed his victory in the Met Mile and was the last of his six wins in an 11-race career.

“Honor Code was an exceptional horse,” McGaughey said. “He wasn't the easiest horse to train. He kind of did a little bit of what he wanted to do. After he won in the Whitney, he didn't want to go back to the training track. I had to bring him up here and train. I don't know why.”