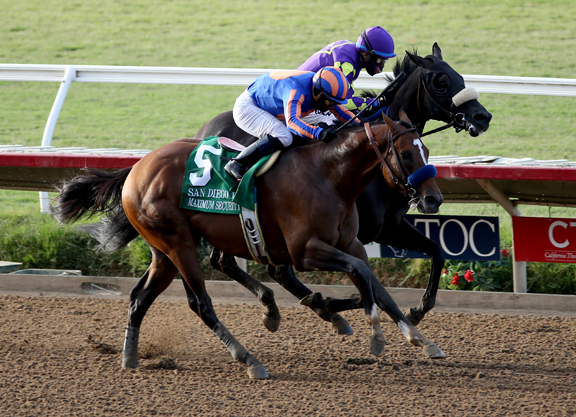 Just about everyone was prepared to either love or hate the performance of Maximum Security (New Year's Day) in the GII San Diego H. Saturday at Del Mar. Either he would come back and dominate or he would struggle in his first performance outside of the notorious Jason Servis barn. There didn't appear to be much room for a gray area.

But that's where things have landed. He was good enough to win but not so good that he proved beyond any doubt that he is the same horse as he was throughout last year and when winning the $20-million Saudi Cup in February.

The optimist can point to a strangely run race in which Maximum Security set the early pace, was taken back by substitute jockey Abel Cedillo and dropped back to third. That's not exactly the easiest way to win a race, but Maximum Security had a second run in him and just nipped Midcourt (Midnight Lute) by a nose. He showed a lot of determination. Plus, it was his first race in nearly five months and new trainer Bob Baffert admitted Sunday that he didn't have Maximum Security fully cranked up.

“I actually thought he was pretty good right after the race being that I only had him about 80%,” Baffert said. “I didn't think he'd have to do a stop-and-go movement [during the race] but he showed what a great horse he is.”

Baffert added that he considered the San Diego a small step in the process.

“It's a good starting point, we learned a lot about the horse, now we're caught up and he's ready to go,” he said

Yet, it wasn't unreasonable to expect something better than a nose victory in a Grade II race. This is the horse who was last year's champion 3-year-old and right after the Saudi Cup was widely considered the best horse in training. The Maximum Security that won the GI Cigar Mile H., the Saudi Cup and crossed the wire first in the GI Kentucky Derby would have crushed the type of horses he faced in the San Diego.

That horse, of course, was trained by Servis, and every time one of his former horses races, everyone is left to wonder if they will perform for new trainers who are not using performance-enhancing drugs.

All of which is why one should neither write Maximum Security off or declare that he is back. There are just too many questions and there is plenty of time for them to be answered.

Baffert mentioned the GI Woodward S. at Saratoga as a possibility for Maximum Security, but it's much more likely that he will go next in the GI Pacific Classic at Del Mar on Aug. 22.

But, for Maximum Security, the goal now goes beyond winning. He needs to not only win the Pacific Classic but to do it impressively and show everyone that he is the one to beat in the GI Breeders' Cup Classic.

As for the San Diego, I'll give him a B- for a grade. That doesn't mean there's not an A+ performance yet to come.

Still No News Out of Saudi Arabia

It's been 138 days since the running of the Saudi Cup and 129 days since Jason Servis was among a long list of individuals indicted for allegedly doping their horses. That should be more than enough time for Saudi racing officials to have concluded their investigation and determine whether or not Maximum Security will be disqualified and the purse redistributed. The ultimate decision may rest on whether or not any illegal medications were found in Maximum Security's system after the race, but those tests should have been concluded months ago.

What's going on? Another week has gone by without any answers.

Here's what Director of Strategy and International Racing for the Jockey Club Of Saudi Arabia Tom Ryan told the TDN in an email last week: “Work on the Maximum Security investigation continues. At the moment it looks like we will be able to issue an official statement as a means of an update over the next week or so.”

Will Volatile and Vekoma Meet Up?

The expectations for Volatile (Violence) were so high coming into the GI Alfred Vanderbilt S. Saturday at Saratoga that not everyone was raving about his victory. A lot did go his way. Rival Whitmore (Pleasantly Perfect) broke through the gate prior to the start, which likely compromised his chances. And Volatile was somehow allowed to set about as slow a pace as you will ever see for a Grade I sprint race. The first quarter went in 23.46 and the half was completed in 46.67 before Volatile won by 1 1/4 lengths.

But that doesn't mean this wasn't a test for a horse who had never even run in a graded stakes race before, no less a Grade I. His three opponents had earned a combined $6,091,100 and Volatile beat them decisively. After campaigning Mitole (Eskendereya), who ran an uncharacteristically poor race last year in the Vanderbilt when third, trainer Steve Asmussen may once again have the best sprinter in the country.

But there's at least one outstanding horse standing between Volatile and an Eclipse Award and that is Vekoma (Candy Ride {Arg}), the winner of the GI Runhappy Carter H. and the Gi Runhappy Metropolitan H. The Aug. 29 GI Forego at Saratoga seems like a logical spot for both Vekoma and Volatile, and if both show up, that may be the race of the meet.

For now, spectators will be allowed to attend the Kentucky Derby, but one has to wonder if that is about to change.

Churchill Downs made the announcement June 24 that it has received permission from Governor Andy Beshear to allow fans to attend the Derby week races during a short September meet at Churchill. At the time, the state was doing quite well in its fight against the coronavirus. According to the New York Times, on June 24 there were only 199 new cases of coronavirus in the state. On Sunday, 836 new cases were reported, the second highest total since the outbreak began.

“We're not playing around with the numbers that we're seeing,” Beshear said.

Had there been that many cases on a daily basis back in June, it seems highly unlikely that Beshear would have given the green light to having fans. Churchill has said that the amount of people allowed to watch will be limited, but haven't said what sort of number they are targeting.

Around 50,000 seems like a reasonable estimate, which would be a public gathering that would be unprecedented since COVID-19 became a fact of life. Considering what's going on, not just in Kentucky but around the country, it's hard to imagine that happening. Beshear certainly has reason to reverse course.