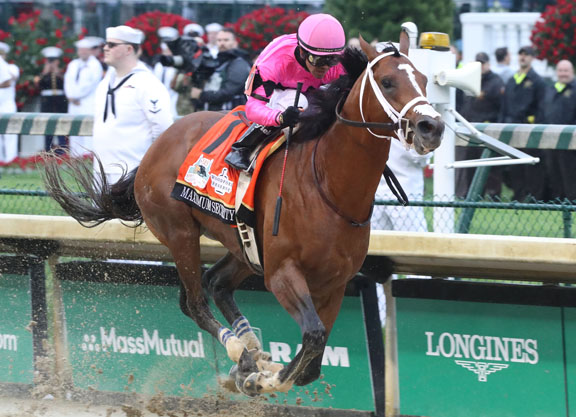 Gary and Mary West’s Maximum Security (New Year’s Day) makes his first start since being DQ’d from first to 17th in the May 4 GI Kentucky Derby Sunday in Monmouth’s Pegasus S., the local prep for the GI TVG.com Haskell Invitational S. July 20.

Winning his first three starts by a combined 34 1/2 lengths, including a $16,000 maiden claimer and a pair of starter optional claimers, at Gulfstream, the homebred took things to the next level with a front-running score in the GI Florida Derby Mar. 30. The bay crossed the line first on the first Saturday in May, but was taken down in a controversial DQ for interference in the stretch.

Maximum Security will be the overwhelming favorite in this six-horse affair, but Todd Pletcher sends out a pair of runners worth a look. King For a Day (Uncle Mo) graduated at second asking in his first start over a route of ground at Belmont in October and was fourth next out in the GII Kentucky Jockey Club S. Nov. 24. He returned to winning ways in his seasonal bow at Pimlico, capturing the restricted Sir Barton S. May 18.

Stablemate Last Judgement (Congrats) also earned his diploma second out in a state-bred test at Gulfstream and followed suit with an open optional claimer score at Oaklawn Mar. 16. He was last seen finishing a well-beaten ninth from the 13 hole in the GIII Pat Day Mile on Derby day, a race that produced next-out GI Woody Stephens S. winner Hog Creek Hustle (Overanalyze).