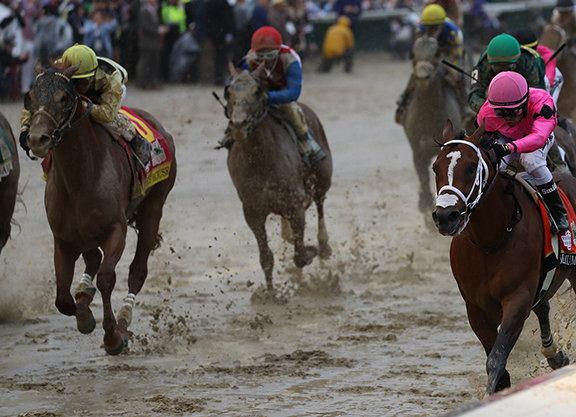 LOUISVILLE, KY – On this First Saturday in May, it was the most exciting 22 minutes in sports.

Maximum Security (New Year's Day), unbeaten in his first four career starts, including the GI Florida Derby, led the field of the 145th GI Kentucky Derby every step of the way beneath Luis Saez and crossed the wire 1 3/4 lengths clear of 65-1 longshot Country House (Lookin At Lucky) before a rain-soaked crowd of 150,729.

But the celebration for owners Gary and Mary West and trainer Jason Servis was short lived, however, as the tote board began flashing Maximum Security's number seven after a pair of jockey's objections lodged by Country House's rider Flavien Prat as well as Jon Court, aboard Long Range Toddy (Take Charge Indy), who tired to 17th.

Maximum Security, off as the 9-2 second-choice, showed the way through fractions of :22.31 and :46.62 over the sloppy, sealed going, and veered out sharply at the five-sixteenths pole, impeding War of Will (War Front), who reported home eighth. The incident caused a wild chain reaction, also impacting the aforementioned Long Range Roddy and eventual 14th-place finisher Bodexpress (Bodemeister).

After a review of no less than 22 minutes, Maximum Security was disqualified for the infraction and placed 17th behind Long Range Toddy. This was the first disqualification in the 145-year history of the Kentucky Derby.

Code of Honor (Noble Mission {GB}), who shot up the rail at the top of the stretch as Maximum Security wandered, was elevated from third to second. The stretch-running Tacitus (Tapit) was moved up a slot to third.

Barbara Borden, Chief Steward for the Kentucky Horse Racing Commission, offered a brief, prepared statement while not taking questions from the large press corp on hand.

“We had a lengthy review of the race,” she said. “We interviewed the affected riders. We determined that [Maximum Security] drifted out and impacted the progress of [War of Will], in turn, interfering with [Long Range Toddy] and [Bodexpress]. These horses were all affected, we thought, by the interference. Therefore, we unanimously determined to disqualify number [Maximum Security] and place him behind [Long Range Toddy].”

Of the disqualification, Servis said, “I don't think it changed the outcome of the race. It looks like something scared him in the infield. I feel bad for the Wests. It looked like he ducked out a little bit. It hasn't sunk in yet, but it will.”

Saez added, “I thought I never put anybody in danger. My horse shied away from the noise of the crowd and may have ducked out a little.”

Country House, still eligible for a first-level allowance race, paid $132.40 to win and is the second longest shot to win the Kentucky Derby. Donerail paid $184.90 in the 1913 Derby.

Placed in a good spot in a mid-field ninth for most of the way, the chestnut began to wind up on the far turn with a four-wide blitz and miraculously stayed out of harm's way from the fiasco. Country House looked a winner as they straightened for home but Maximum Security had plenty left in the tank and dug in gamely to cross the wire first.

“Well, the entire trip was good,” Prat said. “He broke well and just put me in the race. He was traveling really well the entire race. And once I got him outside and I started to make my move, well, Maximum Security, he kind of drift out and turned us sideways. Like you say, the two horses inside of me had a lot more trouble than I did, but it affected me anyway.”

It may not be exactly how he dreamt, but Country House becomes the first Kentucky Derby winner in the brilliant career of Hall of Famer Bill Mott, who was winless from eight previous starters. He also saddled Tacitus.

“You know, as far as the win goes, it's bittersweet,” Mott said. “I would be lying if I said it was any different. You always want to win with a clean trip and have everybody recognize the horse as the very good horse and for the great athlete that he is. I think, due to the disqualification, probably some of that is diminished. But this is horse racing.

Mott continued, “And I know the stewards had a very, very difficult decision. I mean, I'm glad I wasn't in their shoes. But with that being said, I'm damn glad they put our number up.”

Country House, tabbed a 'TDN Rising Star' after blowing the start and posting an eye-catching maiden win in his sophomore bow at Gulfstream Jan. 17, ran well in defeat in his next three attempts versus stakes company. Second-best after lugging in down the lane in the GII Risen Star S., he reported home fourth after a wide trip in the GII Louisiana Derby. He punched his ticket to Louisville with a third-place finish in the GI Arkansas Derby.

Country House was bred by the late longtime owner/breeder Joseph V. Shields Jr., who past away last fall. Shields campaigned homebred Wagon Limit to a memorable victory over the great Skip Away in the 1998 GI Jockey Club Gold Cup. Country House is campaigned in partnership by Mrs. J.V. Shields, E.J. McFadden and LNJ Foxwoods.

“Well, it's very exciting because Jerry bred the horse,” Mrs. Shields said. “He's a homebred. And I just thank Billy Mott for training him, Flavien for riding him, and for this incredible win. It will take a while for it to sink in.”

Pedigree Notes:
Country House is the first Triple Crown race winner and third North American Grade I winner for Lookin At Lucky, who was represented by champion and five-time Grade I victor Accelerate and GI Beldame S. heroine Wow Cat (Chi) last term. Country House is 25th graded stakes winner and 44th black-type winner for his sire Lookin At Lucky. His stakes-winning son Lookin At Lee completed the exacta in the 2017 Run for the Roses. Joseph Shields, Jr., purchased the winner's third dam, Allen Paulson-bred Ayanka (Jade Hunter), for $100,000 with second dam, GISP Shooting Party (Sky Classic), in utero at the 1997 Keeneland November Sale. Quake Lake is the second foal out of Shooting Party, who is also responsible for MGSW & GISP millionaire Breaking Lucky (Lookin At Lucky). The 21-year-old mare is still in production, foaling a Palace Malice colt in 2017 and an Exaggerator filly in 2018. She aborted twins by Exaggerator this year. Country House is the final foal out of Quake Lake, who carried the Shields silks to two wins from six starts for trainer Graham Motion. Her year-older foal is the Mott-trainer filly Mitchell Road (English Channel), who captured the Albert M. Stall Memorial S. at the Fair Grounds earlier this term.