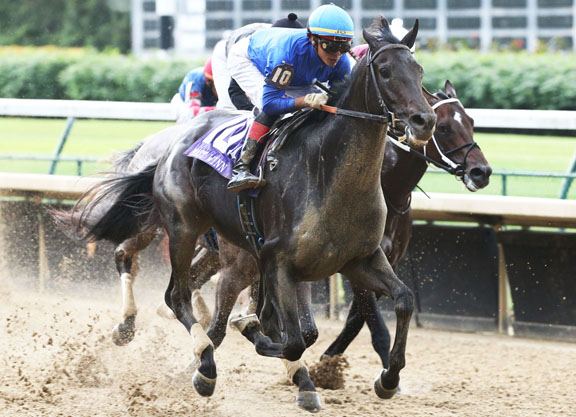 Though coming off an impressive win in the GIII Matt Winn S. at Churchill Downs, Maxfield (Street Sense) will not start in the GI Belmont S., this year the first leg in the Triple Crown. His next start will come instead in the GII Toyota Blue Grass S. July 11 at Keeneland.

The news that Maxfield was headed to the Blue Grass was first reported by the Daily Racing Form.

“It's really a matter of trying to make the proper progressive steps,” said Jimmy Bell, the president and racing manager of Godolphin USA. “Sometimes after a very long layoff, you get the big performance, which we certainly felt he gave us in the Matt Winn. To go in the Belmont, we'd have to come back in four weeks, ship to Belmont and go around one turn versus giving him extra time. The progression is really most important and we really want to keep him at two turns. He has trained at Keeneland, the Blue Grass is a great race and we are trying to gradually step up in competition and hopefully be competitive in the second half of the year.”

There will be eight weeks between the Blue Grass and the GI Kentucky Derby. Bell said it has yet to be decided if Maxfield will have a race between the two races.

“He has obviously shown that he can run well fresh,” Bell said.

After his win in the GI Claiborne Breeders' Futurity at Keeneland, Maxfield was considered a leading contender for the GI TVG Breeders' Cup Juvenile, but had to miss the race when it was discovered he needed surgery to remove an ankle chip. After seven months off, he overcame traffic problems to win the Matt Winn by one length.

“We are just happy to have him back and to have him show what we had all seen in the mornings and in his earlier races,” Bell said. “He just showed a tremendous mental outlook on racing that was probably more advanced than his physical outlook. To see the two come together after such a long layoff is a credit to the horse and a credit to [trainer] Brendan [Walsh].”

With more than 12 weeks to go before the Sept. 5 Derby, Maxfield is widely recognized as one of the top two or three threats for what will now be the second race in the Triple Crown.

It's been a tough couple of weeks for the Belmont. Bob Baffert was considering Nadal (Blame) and Charlatan (Speightstown), but both have been injured and are out of the race. It appears that GI Florida Derby winner Tiz the Law (Constitution) will be a heavy favorite in the mile-and-an-eighth race. Other possible starters include Dr Post (Quality Road), Gouverneur Morris (Constitution), Farmington Road (Quality Road), Tap It to Win (Tapit) and Max Player (Honor Code). Sole Volante (Karakontie {Jpn}) and Shivaree (Awesome of Course) are entered in an allowance race Wednesday at Gulfstream, but their connections have not ruled out the Belmont.