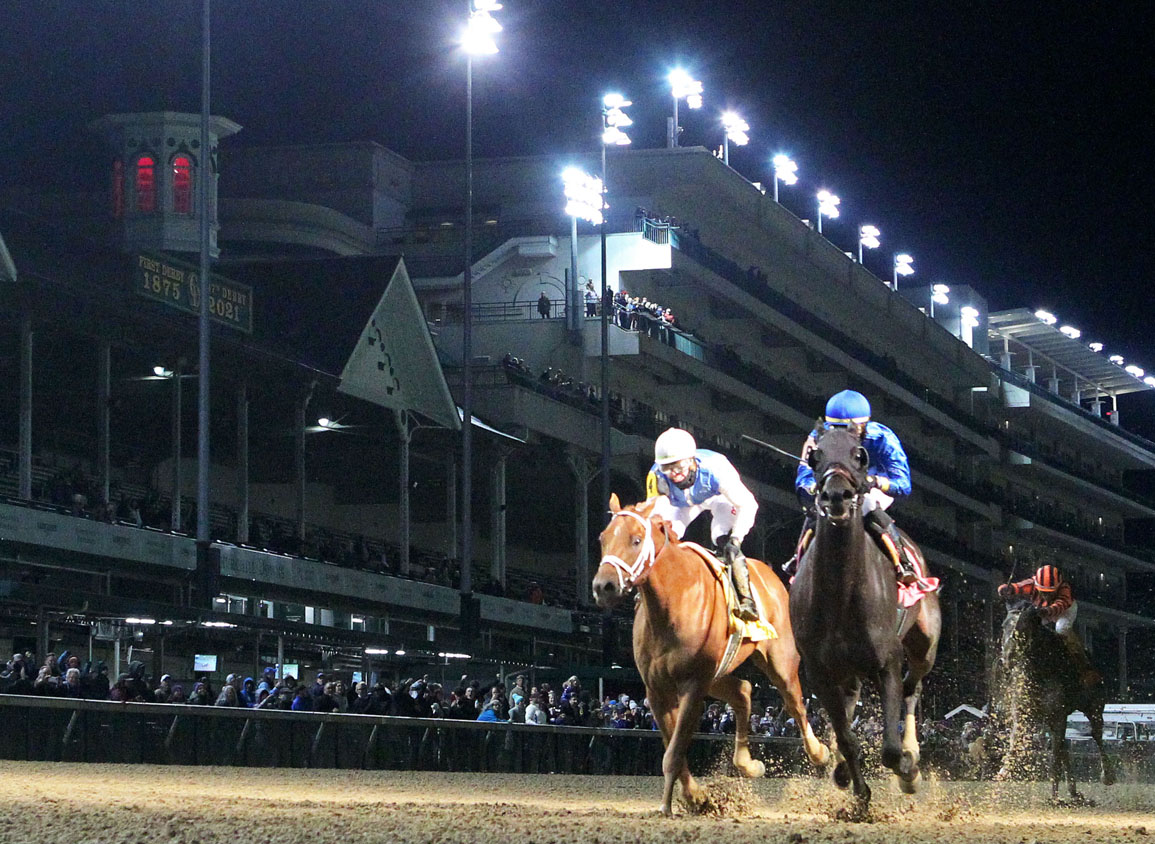 The connections of Maxfield (Street Sense) had been hoping the colt could add one more Grade I to his resume before retiring to stand the 2022 season at his owner's Jonabell Farm. The Godolphin homebred rewarded their faith at the 11th hour with a stylish score in his career finale in Friday's GI Clark H. at Churchill Downs, a track at which he is undefeated.

Dispatched at even-money along with hard-knocking GSW & MGISP Midnight Bourbon (Tiznow), Maxfield was away in good order from the outside post in this eight-horse affair and cruised up to press his chief market rival through a :23.83 opening quarter. Glued to Midnight Bourbon's outside hip through a half in :48 flat, the dark bay turned up the heat with three-eighths left to run, drawing even with his foe. Floated out three wide by Midnight Bourbon turning for home, Maxfield gained a narrow advantage over that stubborn rival in the lane, but had a new shooter coming in hot on his outside in Happy Saver (Super Saver). Midnight Bourbon gave way in the final sixteenth, but Happy Saver was still coming on strong. Maxfield dug deep with a little encouragement from Jose Ortiz, holding off Happy Saver by a half-length. Midnight Bourbon hung on for third.

“I feel just delighted he got the job done like that today,” trainer Brendan Walsh said. “It's a very prestigious race and it's very nice he could win it and go into his stud career like that.”

“He put me in the race today when he broke from the gate,” Ortiz said. “I could tell Happy Saver would be coming around the far turn and Maxfield felt him come alongside as well. He was able to dig down and really fight hard today. Hats off to Brendan and his team who have done an amazing job with him throughout his career. I'm very happy he gets to go out this way.”

Winner of the GI Claiborne Breeders' Futurity S. in 2019, Maxfield missed that year's GI Breeders' Cup Juvenile with a foot bruise and subsequently underwent surgery for an ankle chip. He returned a winner in the 2020 GIII Matt Winn S. in May and was knocked out of the delayed GI Kentucky Derby with an ankle fracture. Back in time for one more start as a sophomore, the dark bay captured the Tenacious S. at Fair Grounds that December and opened 2021 with a win in the GIII Mineshaft S. there Feb. 13.

Third in his first attempt at 10 furlongs in the GI Santa Anita H. Mar. 6, Maxfield rebounded with a win in the GII Alysheba S. Apr. 30 and followed suit with a facile score in the GII Stephen Foster S. June 26, taking his record beneath the Twin Spires to four-for-four. The homebred checked in second to GI Breeders' Cup Classic winner and likely Horse of the Year Knicks Go (Paynter) in Saratoga's GI Whitney S. Aug. 7 and completed the exacta in Belmont's GI Woodward S. Oct. 2, earning 105 Beyer Speed Figures for both of those efforts.

Maxfield is one of 11 Grade I winners, 35 graded scorers and 81 black-type victors by his sire Street Sense, who he will be standing alongside at Darley's Jonabell Farm for an introductory fee of $40,000. He is also one of 12 top-level scorers, 32 graded winners and 57 black-type victors out of a daughter of red-hot broodmare sire Bernardini, who stood at Jonabell until his death earlier this year. Maxfield is the third Grade I winner of this year alone produced by a daughter of Bernardini, following dual Grade I-winning turfer Colonel Liam (Liam's Map) and GI Cotillion S. victress Clairiere (Curlin). He is also the broodmare sire of GI Breeders' Cup Distaff runner-up Dunbar Road (Quality Road).

Maxfield's dam Velvety has also produced the 3-year-old colt Dubai Vision (Medaglia d'Oro), who was unplaced in one start in Europe, and an unraced juvenile filly named Loved (Medaglia d'Oro). Her 2020 Street Sense colt passed away and she had an Uncle Mo colt Mar. 20 of this year. The 11-year-old mare was bred back to Uncle Mo.