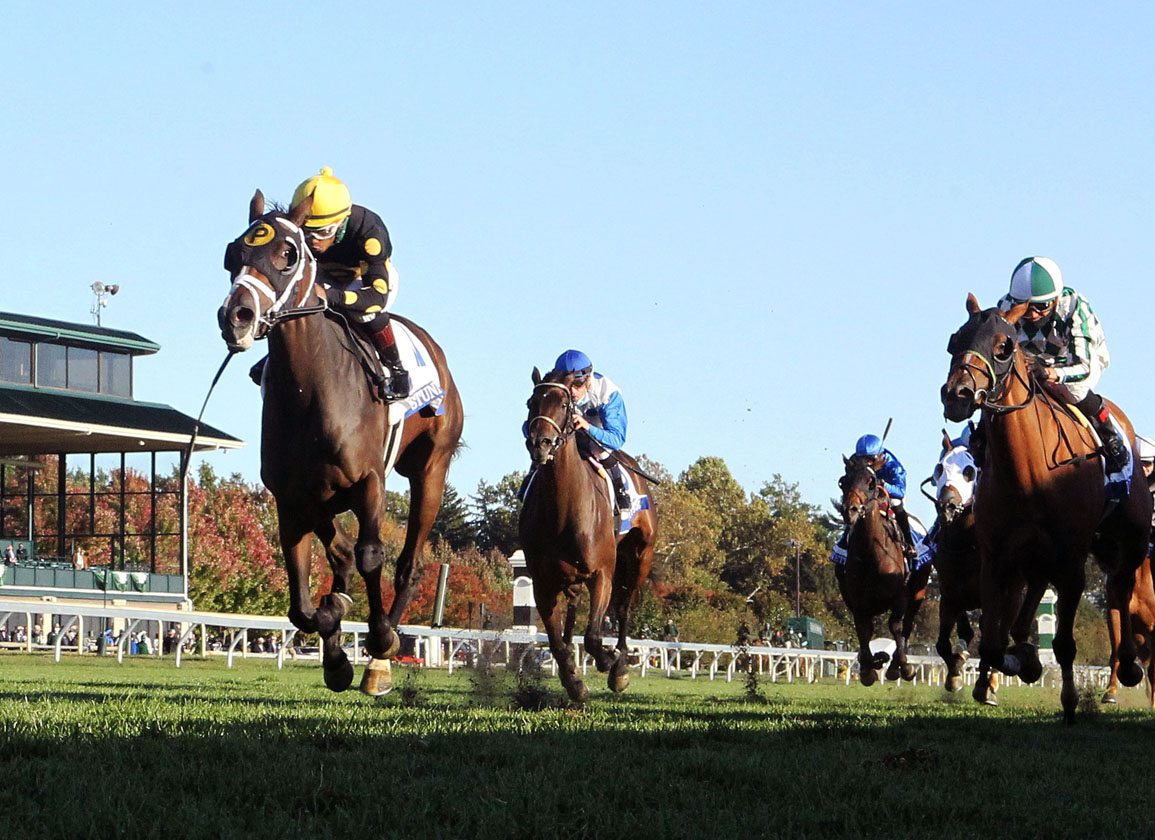 With the 2022 breeding season right around the corner, we will feature a series of breeders' mating plans over the coming weeks. Today we have Aidan and Leah O'Meara of Stonehaven Steadings.

VENETIAN SONATA (m, 13, Bernardini–Moonlight Sonata, by Carson City), to be bred to Curlin

Bernardini's talents as a broodmare sire have been impressive but his strike rate with Curlin has been hugely impressive with nearly 20% stakes winners to date. That coupled with another stellar year at the track for Curlin made this mating an easy decision. Venetian is not a very big mare but she thankfully will throw to the sire in the size department. She has a very classy physique that she consistently passes on and compliments some of the more robust/powerfully built stallions such as Curlin.

True Feelings had a nice touch with Justify in September but had an equally impressive foal by Quality Road this spring and that tipped the balance in Quality Road's favor for next year again. Quality Road is primed for the peak of his career here the next five years with the best-bred crops to date about to hit the track and another outstanding year in the sales ring.

THISSMYTIME (m, 5, Carpe Diem–Seraphic Too, by Southern Halo), to be bred to Quality Road

Thissmytime is a new addition to the broodmare band for us this year. She's a track record setter and Grade II placed. We like to give our younger mares every opportunity to succeed and like to breed them to at least four proven sires to give them a good foundation to build off of. When you breed to these better sires they obviously cost a bit more with the stud fees and you're not always guaranteed success at the sales with that particular offspring. You're not just getting the potential sales success in three years' time from that particular mating, but also hopefully establishing your mare's career as a stakes producer, and that long-term investment in the proven sires can come back to you in spectacular fashion, as it did for us this past year with True feelings and Venetian Sonata. Thissmytime is a medium-sized filly and should benefit from Quality Road's elegant and leggy physique.

BECKLES ROAD (m, 13, Smart Strike–Padmore, by French Deputy), to be bred to Into Mischief

A lot of the time, a particular mating takes a lot of thought and back and forth, but sometimes a previous mating produces such an impressive foal that going back to the same sire is a no-brainer and that's the case this year with Beckles Road. Her yearling Into Mischief filly is one of the best-looking, best-moving and classiest Into Mischief fillies we've come across. The potent combination of both sire lines have produced some of Into Mischief's best runners including Authenthic, Goldencents, Life Is Good, Covfefe and Mia Mischief.

SWEET SAMI D (m, 6, First Samurai–Treaty of Kadesh, by Victory Gallop)/FIGURE OF SPEECH (m, 5, Into Mischief–Starlight Lady, by Elusive Quality), to be bred to Gun Runner

Gun Runner has made the most impressive start of any young sire since Uncle Mo a few years back and looks to have the potential to develop into one of the elite sires of the next decade. He has shown an affinity for the Storm Cat sire line similar to his sire Candy Ride, and both of our fillies hail from similar lines. Sweet Sami D is from the Giant's Causeway line, similar to [GI Hopeful S. winner] Gunite and Figure of Speech is from Harlan, similar to [GI Breeders' Cup Juvenile Fillies winner] Echo Zulu. We like to breed a quicker type filly to the Classic distance sires and both of these fall into that category. Gun Runner is a nice sized horse himself, but we're always cautious about a sire's own sire and what they have produced physically themselves over the years, so we tend to breed a bigger, leggier type of mare to sires on this line, as the sire line can tend to throw individuals who are medium sized in general. Both mares are 16.2 hands and should suit Gun Runner well physically.

If a young mare of ours who has been bred to more modest mid-range sires starting out can show us that she can produce the right type of individual with her first couple of foals, then we are not afraid to step up and give her even more opportunity going forward. Bernin Midnight falls into this category; she had a very nice Malibu Moon filly sell this past September [for $225,000 at Keeneland] and has a beautiful Street Sense filly for this year. She also had a nice pedigree update with her half-sister Moonlight d'Oro (Medaglia d'Oro) winning the GIII Las Virgenes S. this year.

The family success with Medaglia and her physical match-up with him got her a bump up to the big leagues. Medaglia's stud fee dropping to $100,000 might be the value of the sire ranks this year. While he has lacked the Grade I winners the last couple of years, he still has plenty of graded winners and is still strong commercially.

STUNNING SKY (m, 5, Declaration of War–Sky Walk, by Unbridled's Song), to be bred to Medaglia d'Oro

Stunning Sky is another new addition to the broodmare band. She was a Grade III winner at Keeneland on the turf (in the 2019 Pin Oak Valley View S.). Wasted Tears (Najran), [dam of presumptive champion juvenile Corniche (Quality Road)], showed us this year that a turf filly is not restricted to producing only turf runners herself, and Medaglia himself is a very talented dual-purpose sire. If this mating doesn't produce a dirt runner, Medaglia's stellar record on turf will give every opportunity to produce a runner on the mare's preferred surface.

These two mares are young sisters to Shanghai Bobby (Harlan's Holiday). Miz Kella can tend to throw foals who are medium sized and maybe lacking a little bit of commercial leg. In spite of that, her foals have sold well, with a $425,000 daughter by Uncle Mo this past September, and they can also run, with her second foal already being the multiple stakes winner Canoodling (Pioneerof the Nile), who just missed out on Grade I black type in the La Brea S. Her yearling filly by Street Sense is physically the nicest she's produced so far and that made the next year's mating decision very straightforward. Street Sense, similar to Curlin, has a very impressive strike rate with Bernardini mares and that made him an easy selection for Liberty Lady. He can be a tricky horse to match a mare to physically and from our experience tends to do better with a smaller, more refined mare similar to Liberty Lady. She had a very nice colt by him for the sales last year that had to be scratched with an X-ray issue, but showed she could produce the right type physically with him and gets another opportunity next year.

Earlybird Road is a good case study for not giving up on a mare too quickly if her first foals don't look the part. She's also a good example of the importance of diversifying breeding lines in the early years of a mare's career to give her every opportunity to succeed. Her first two foals bred on the Storm Cat line were very disappointing and could easily convince someone to move her on, but she was a stakes winner and well built and we decided to give her a few more tries on different lines, notably Mr. Prospector and A.P. Indy. She is now a multiple stakes producer and her last four foals are the most physically impressive she's had. We like to breed our mid-range proven mares to young incoming sires and Essential Quality is hands down the most exciting and physically impressive sire of the incoming class this year. She had already produced stakes winner and Grade III-placed Strongconstitution on that line and is a beautiful match physically.

Let us know who you're breeding your mares to in 2022, and why. We will print a selection of your responses in TDN over the coming weeks. Please send details to: [email protected].