Matareya Makes It Three in a Row in Eight Belles 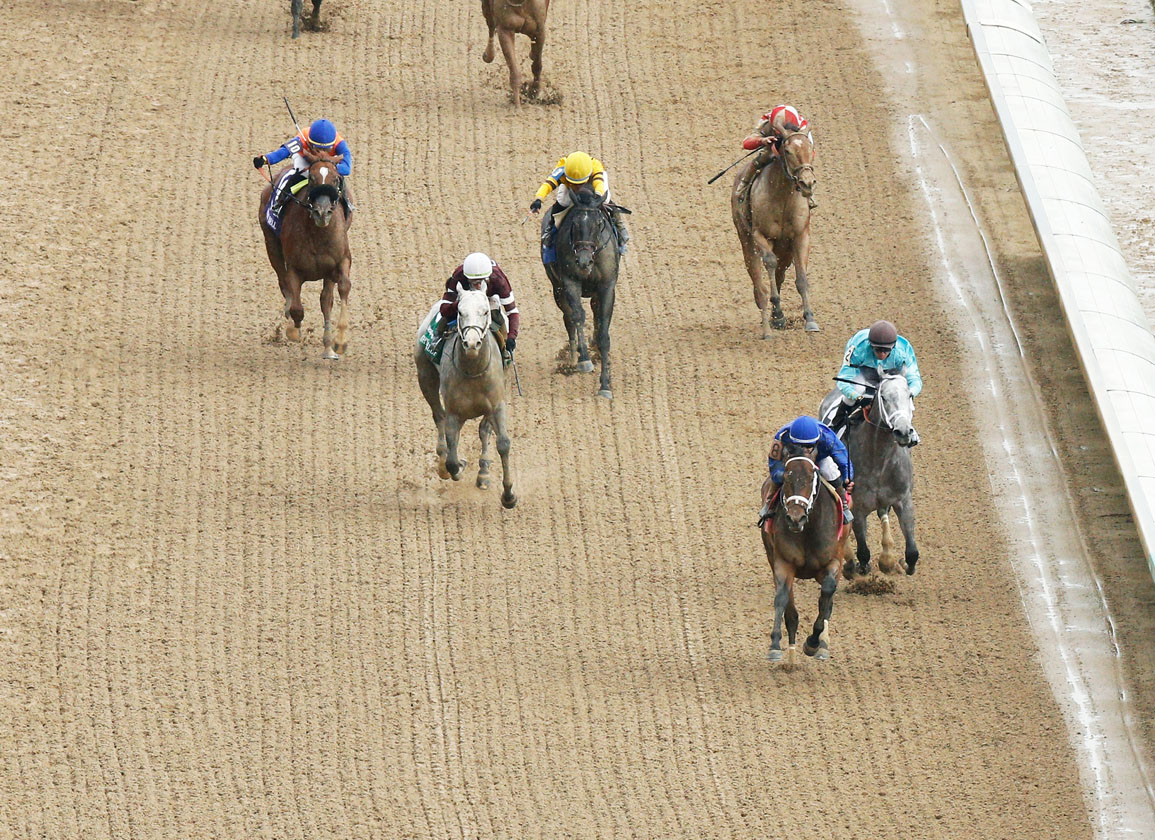 Godolphin's progressive Matareya (Pioneerof the Nile) parlayed a perfect inside trip into a facile success in Friday's $500,000 GII Eight Belles S. at Churchill Downs, the third winner of the event in the last six years for trainer Brad Cox.

The homebred filly was away without incident and raced worse than centerfield through the opening exchanges, as Pretty Birdie (Bird Song) set what appeared to be a strong early tempo in advance of Marissa's Lady (Violence). Racing well off the rail down the chute, Matareya was deftly maneuvered by Flavien Prat to her inside, across the heels of Wicked Halo (Gun Runner) and Ain't Easy (Into Mischief) and was guided down onto the fence linking up with the track proper. Asked for a bit more acceleration approaching the half-mile marker, Matareya was all the way into third and onto the back of the pacesetter while in hand for the run around the turn. Patiently handled while scraping the paint nearing the quarter pole, Matareya pushed away from the rail and into the two path to deliver her challenge in upper stretch. Pretty Birdie did everything in her power to match strides, but Matareya overtook her for good entering the final eighth of a mile and inched clear. Wicked Halo rallied for third.

“She broke well but I just got outrun in the first part,” said Prat. “Then I took a chance going to the inside where there were good horses to follow. Then we had a fair pace, was traveling well and when I tipped her out, she was there for me. I thought it was a really good run for her.”

Cox indicated the winner would stretch out to Belmont's one-turn mile for the June 11 GI Acorn S., where she could face her Grade I-winning stablemate Juju's Map (Liam's Map), an allowance winner earlier Friday beneath the Twin Spires.

“The Acorn's going to be interesting five weeks from now. Both are good fillies,” the conditioner said. “This filly is probably going to do her best going around one turn. Juju's Map definitely can handle two turns. At some point, they're going to sort themselves out, and if they meet up in the Acorn, I don't know.”

A distant runner-up to Secret Oath (Arrogate) in a one-mile Oaklawn allowance Dec. 31, Matareya aired by 5 1/4 lengths when cut back to six furlongs at the Fair Grounds Feb. 26 and most recently pummeled her rivals in the GIII Beaumont S. over an extended seven furlongs at Keeneland Apr. 10.

Matareya's Grade III-winning dam is a daughter of Golden Velvet, who was stakes-placed in France for Andre Fabre before adding a pair of graded victories and a runner-up effort in the GI Ogden Phipps H. once repatriated for Kiaran McLaughlin.

Golden Velvet was a daughter of Harbor View Farm's outstanding turf distaffer Caress, who was purchased by John Ferguson for $3.1 million at the 2000 Keeneland November Sale a handful of months after the mare foaled a Pulpit colt. That offspring, Sky Mesa, was raced by John Oxley to a victories in the GI Hopeful S. and GII Lane's End Breeders' Futurity, but lost any shot at a championship when scratched on the eve of the 2002 GI Breeders' Cup Juvenile. Caress is also the dam of MGSP Monthir (Gulch), a sire of some note in South America; and of Velvety (Bernardini), whose son Maxfield (Street Sense) closed out his career victoriously in the GI Clark H. and now stands at Darley at Jonabell.

Innovative Idea is the dam of the 2-year-old filly Methodology (Uncle Mo), a yearling colt by the same stallion and visited him once again last season.