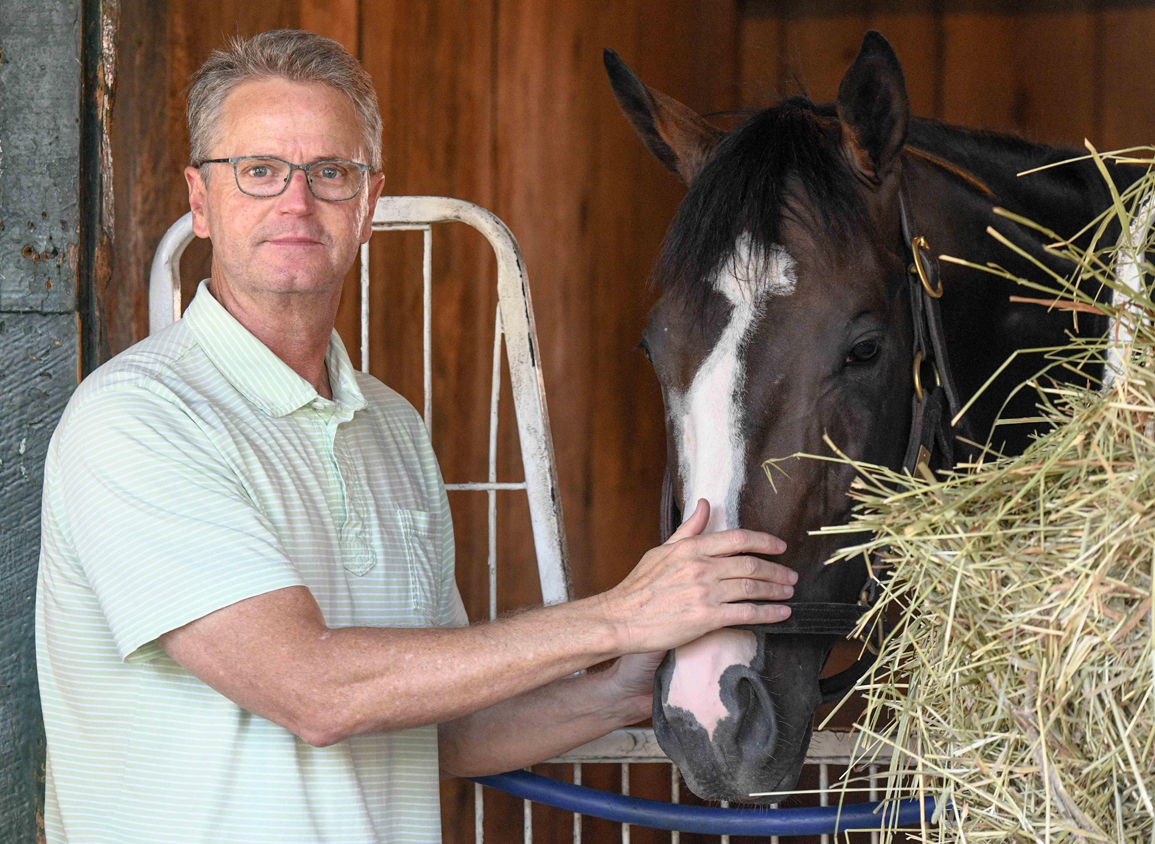 SARATOGA SPRINGS, NY–There's more than a casual connection between New Orleans, Masqueparade (Upstart) and Saratoga Race Course, where the colt will run Saturday in the $1.25-million GI Runhappy Travers.

Trained by New Orleans native Al Stall for a group of New Orleans businessmen and pals headed by Wilbur “Bill” Babin called FTGGG Racing and whose name references the masks worn during the city's signature Mardi Gras festivities, Masqueparade was purchased with Saratoga in mind.

Babin made his first visit to Saratoga in 2003; has come for the entire meet since 2013; and had told the veteran trainer his goal was to race at Saratoga.

Masqueparade, the second of two yearlings that FTGGG purchased on consecutive days at 2019 Keeneland September, delivered for Babin and his friends July 31 with a third-place finish in the GII Jim Dandy S., the local prep for the Travers.

“He wanted to run a horse,” Stall said. “He'd have been happy running in the maiden auction race. And now he's in the Jim Dandy and Travers. It's really an unbelievable story. Someone from New Orleans and it's not like 'let's get something for home, for Fair Grounds.' He wanted something for Saratoga and, look, he's in the mother lode with a chance to run well.”

For Babin, in particular, Masqueparade has provided him with a summer of pinch-me moments at America's oldest racetrack.

“My goal was only to saddle a horse in the paddock at Saratoga. I never in my wildest dreams dreamed that it would be in the Jim Dandy and now the Travers,” Babin said. “I told Al, jokingly, of course, when we bought the horse that I wasn't worried about slow development or anything. I wasn't worried about being in the Triple Crown. The whole goal was the Travers, was Saratoga. Literally, I was just joking and now it's come true.”

Stall has handled plenty of top graded stakes horses during his career, including champion Blame (Arch), who handed future Hall of Famer Zenyatta (Street Cry {Ire}) her only career loss in the 2010 GI Breeders' Cup Classic. He said he never considered skipping the Travers to avoid facing Essential Quality (Tapit), the winner of seven of eight lifetime starts.

“No. Been around too long,” he said. “You weren't afraid to run against Zenyatta. I have all the respect in the world for him, but it's horse racing.”

Masqueparade, the most accomplished member of Upstart's first crop, broke his maiden by a disqualification at Fair Grounds Mar. 20 in his fourth start. He showed himself to have stakes potential with a smashing allowance victory on the May 1 GI Kentucky Derby card and beat three stakes winners in the GIII Ohio Derby June 26.

Stall said that Babin told him several times that he wanted to get involved in owning Thoroughbreds. Two years ago, the bankruptcy attorney was ready. He had put together a group of seven partners, which named its stable FTGGG–For the Greater Glory of God, the motto of the Jesuit order–and had the resources to buy some horses. Guided by Stall and the husband-wife team of Frank and Daphne Wooten of Camden, S.C., they purchased two colts, Thirtyminutemass (Honor Code) for $25,000 and Masqueparade for $180,000.

Babin said that the markings on Masqueparade's face reminded the owners of the mask worn by the star of “Phantom of the Opera,” which includes the song Masquerade. The colt's name came from tweaking Masquerade, to connect it with New Orleans and Mardi Gras.

Thirtyminutemass made it to the races first in October, broke his maiden in February at Fair Grounds and was claimed for $30,000 in his next start. FTGGG was a one-horse stable, whose runner had been beaten 14 3/4 lengths in his three starts. In a span of about six weeks, though, he was moved to first by the DQ and crushed the field at Churchill Downs by 11 3/4 lengths. He completed the 1 1/8 miles in a sharp 1:48.35.

Stall said he could not explain why the bay colt ran so well a few hours before the Derby. The time was faster than the 1:48.99 turned in by Malathaat (Curlin) winning the GI Kentucky Oaks the previous day. According to Stall, he had the second-best rating number of any horse on the Derby program, trailing only the beaten Derby favorite Essential Quality, who had a wide trip.

“No earthly idea. Just Mother Nature,” Stall said. “Looks the same. Well, he might've grown a little bit, but nothing really changed. I just think a steady diet of races is what that horse needed to get him to where he is now. We didn't expect to be here in mid-February. After the March race, maybe in a little bit, but we just weren't sure where we were. He was always making mistakes in his races. He halfway put it together in the DQ race. And he put it all together at Churchill and Ohio. He's getting all furnished out for us.”

Jockey Miguel Mena, who has been up for all of Masqueparade's races, will be in town to ride Stall's first Travers starter. A field of seven, led by Essential Quality, is expected to be entered. Stall said the Travers makes sense for his colt.

“Well, it just seems like a one-horse-to-beat type of race,” he said. “We came up here with the Travers in mind. Took a nice little break between the Ohio Derby. Between shipping from Ohio and back and shipping up to Saratoga, I decided to skip a work with him. He only had two works between the five weeks and the track was deep-ish earlier in the meet. We think he needed the race a little bit, the Jim Dandy.”

“We weren't going to take back from them and get the shuffle,” Stall said. “We would have been last out in the backside. So, we went on with it and he ran as far as he could as hard as he could and got beat 2 3/4 lengths. He acts like that race did something for him in a positive way.”

Masqueparade breezed four furlongs in :48.11 Saturday, the 16th fastest of the 41 that worked that morning on Saratoga's main track. Stall said that at a mile and a quarter he hopes that Mena can break well and get the colt into a good rhythm, galloping near the pace with a target ahead to keep his attention.

“He's that kind of horse,” Stall said. “Maybe he's changed a little bit because he drew off well at Churchill. He might have idled a little bit at Cleveland. He made the lead kind of comfortable and they were just kind of getting to him, but you didn't get the feeling that we're going to go past him.

The trainer continued, “He's still a work in progress. I do think he should benefit, hopefully, mentally, but certainly cardio-wise from it, from the Jim Dandy.  His two works have been beautiful. [Saturday's] work was, no doubt, the best work of his career. He's not a big work horse, but he was [Saturday] for whatever reason.”

The FTGGG crew is ready, excited, Babin said, to have a horse good enough to accomplish its goal of running on Saturdays, especially at Saratoga. Stall said Masqueparade is a developing 3-year-old who deserves a chance to run in the Travers.

“I don't push horses to make it to certain races. They take us there,” he said. “So, yeah, I'm fine with it. There's been no extra pressure on my horse. No altered schedules. No nothing. Knock on wood. That's usually when horses run decent races.”