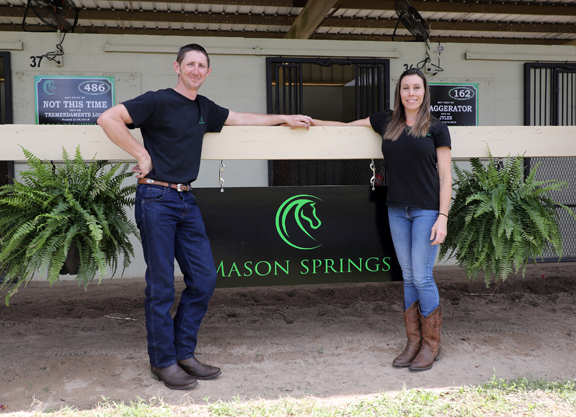 Marcus and Crystal Ryan’s Mason Springs will consign two juveniles at next week’s OBS March Two-Year-Olds in Training Sale. It’ll be the Aiken-based couple’s first time selling horses at an auction other than the Fasig-Tipton Midlantic Sale–they’ll offer an Exaggerator colt (hip 162) on Tuesday and a filly by Not This Time (hip 486) on Wednesday.

“We love the Midlantic sale, but it’s nice to branch out finally,” Crystal Ryan said of the decision to head to OBS. “We both love traveling so much. We hope to be able to get a nice enough horse to be able to go to [Fasig-Tipton] Gulfstream one day and the Arqana sales are our big goal… We ended up landing these horses with a little deeper pedigrees and they were earlier horses. At first, when the entry deadline came, OBS called us–we had talked to them the year before about sending something to an earlier sale–and it was the end of December and we just weren’t sure yet if the horses would be ready for March. The filly was a bit flighty early in her training, but then in January, she turned a corner and was just training so professionally, so we called them back and asked if there was still time to enter the sale. And they told us if we decided that day we could still get in. So we went for it.”

Crystal Ryan got her start with reining horses in Georgia, and eventually made her way to Stonerside in Aiken, SC, where she galloped for Tim Jones. She stayed on when Darley bought Stonerside in 2008, and jumped at the opportunity to ride at Sheikh Mohammed’s Greentree Stables in 2010–that’s where her and Marcus met.

Marcus grew up in Ireland, and eventually got a job working in England for Darley with John Ferguson. He did a stint in Kentucky with Johnny Burke in the Lexington Darley rehabilitation division, and was also part of the staff at Greentree in 2010.

Their relationship, and the idea to start Mason Springs, began at the Spa, and grew as the couple headed back to Aiken and eventually purchased their first horse together at the 2011 Fasig-Tipton October Yearling Sale.

“We had free time in the afternoons after galloping in the mornings, and just working with the yearlings and seeing some of them go off to early racing, it was something that intrigued us–especially pinhooking,” Crystal said. “That was when the Euro was stronger than the dollar, so we traded in Marcus’s savings account for a yearling and have built steadily since then.”

That proved a particularly fortuitous time for a score, as just a couple months later Darley would announce that it was closing its Aiken Training Track stable.

At that point, the Ryans decided to dedicate themselves fully to Mason Springs.

“We didn’t know Darley was pulling out of Aiken, but we had already had our business established, and even though we were still small, we had just been around long enough that when they pulled out, we decided to just go ahead and try to get a few training horses and keep pinhooking and go from there rather than go work for someone else or move away,” Crystal said.

Mason Springs’s crop of juveniles grew to four in 2016, and their quality has steadily improved since then.

“Their walks and presence–especially with the colt,” Crystal said when asked what stood about their two OBS March offerings last September. “For the filly, we had a picture in our heads of exactly what we were looking for, and she was it. So I followed her up to the ring and we had already spent the majority of our money on the colt and I turned around said, ‘Why am I even walking up there? She looks like every $100,000 that I’ve been trying to bid on all morning. I’m going to miss 10 horses behind her because I’m bidding on another $100,000 horse.’ But one of our partners said, ‘I’ll put in extra money if we need it. I love her too.’ … So we went for it, and it worked out.”

While the Ryans weren’t specifically targeting freshman sires, like many pinhookers they were seeking prospects with significant long-term upside who wouldn’t break the bank.

“We felt like with those two stallions, that they would have precocious 2-year-olds, but also horses who would stretch out going two turns, being from the Giant’s Causeway line (Not This Time) and the Curlin line (Exaggerator),” Marcus said. “Rather than looking for sprinters, we were really going out there looking for horses who would run as 2-year-olds but then run those Classic distances later on.”

Hip 162 breezed during Thursday’s first under-tack show, covering a quarter in :22 2/5. While the time may not have stacked up with some of the faster works of the day, the Ryans were quick to note that they do not push their horses to their limits and are extremely conservative with things like vet work–their slogan is “It takes heart…we don’t break it.”

“I’m very happy with the quarter in hindsight,” Marcus said after noting that the colt would likely excel over a route of ground. “Looking at it, you’re like ‘it wasn’t :21 flat’ and all this nonsense. But we’ve done our quarters at home and he has really stepped up his game. For a young horse, coming all the way down here from South Carolina this early in the year, to the big city, I’m very proud of the colt and the way that the filly has been acting. You can look at the times all day long, but to see how they look and how they come back and cool out, that’s what matters to me. In our quarters at home, the colt would’ve probably gone no faster than :26–we have a deeper surface, granted. Maybe we’ve sacrificed a little bit of speed, but our fitness has been great.”

The Not This Time filly will breeze an eighth on Saturday.

“She prepped in :10 2/5 the other day, so I’m hopeful–we live on hope–for a :10 flat,” Marcus said. “But I’d be very glad for just a nice breeze, a good gallop out and for the horse to sell. She’s come on leaps and bounds and she’s really learning to trust us.”

The Ryans also break and train young horses for end-users, and have aligned themselves with another up-and-coming Midlantic-based horseman in trainer Jeremiah O’Dwyer, who Marcus grew up with in Ireland. Mason Springs has six horses for O’Dwyer at the moment, and also helped kick-start the career of Rookie Salsa (Two Step Salsa), a debut winner for O’Dwyer last April at Laurel who went on to upend the Kentucky Juvenile S. under the Twin Spires on GI Kentucky Derby week.

“We were having a party–it was so exciting,” Crystal said of the Churchill Downs win. “We were so happy for him. It definitely helps with our credibility, and it’s nice to have that quality of horse come out of our program. It’s funny–when you work for somebody like Darley for so long, and then you start on your own, you have to work your way up again. But at least we know what the goal is.”