Maryland Lawmakers Introduce Legislation That Would Keep Preakness at Pimlico 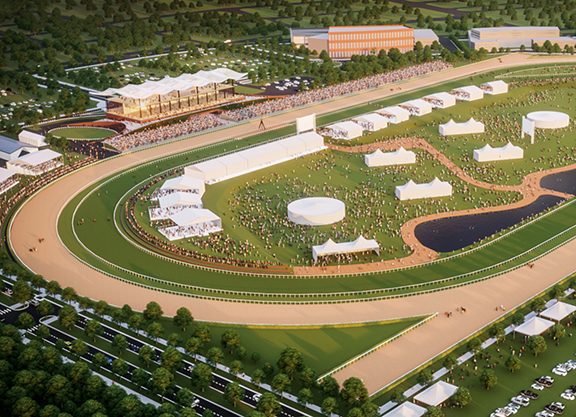 Pimlico concept | Racing for the Future

Maryland lawmakers have introduced a bill, the Racing and Community Development Act of 2020, that would fund renovations at Laurel and Pimlico, ensuring that the GI Preakness S. will remain at Pimlico. The bill calls for the Maryland Stadium Authority to oversee the project and to raise $350 million to do so through the sale of bonds.

The future of the Preakness had been in doubt when officials with The Stronach Group, which owns Laurel and Pimlico, made it known that they were interested in moving the race to Laurel. Part of their reasoning was that Pimlico was run down and a huge investment, one they were not willing to make, was needed to rebuild the track. The City of Baltimore sued The Stronach Group, but, last fall, Last fall, TSG and local and state politicians came to an agreement to work together. That led to the plans to modernize both Maryland tracks, assurances from TSG that the Preakness would remain in Baltimore and the city dropping its suit.

The legislation calls for at least $180 million towards rebuilding efforts at Pimlico and $155 million at Laurel. The entire grandstand and clubhouse at Pimlico will be rebuilt. The legislation was sponsored by Sen. Guy Guzzone. As part of the deal, The Stronach Group will be required to donate the land at Pimlico to the City of Baltimore, which would lease it during a spring racing meet.

“The goal here is to save the Preakness,” Guzzone told the Baltimore Sun. “It's to help surrounding neighborhoods. It's to make Pimlico a viable racing venue for the long term. It's to do so in a fiscally responsible way where we use no funds that would have ever been programmed for education.”

“Today's bill introduction is a critical step forward for Baltimore as it preserves the great tradition of Preakness at Pimlico and signals the commitment of significant investment in the Park Heights community,” Young said.

Though the race meets at Pimlico will continue to be brief, the new facility will be operating throughout the year as the renovations will include the building of athletic fields and housing for the community. The track will also be rotated 30 degrees, which will free up land for private development.

The Sun reported that if the bill becomes a law, starting from the time the bill is signed by the governor, the project will take three to four years to complete.

In a statement Baltimore Mayor Bernard C. “Jack” Young said:  “I thank our legislative leaders who clearly understand what this historic piece of legislation does for the City of Baltimore and for the communities surrounding the racetrack. Today's bill introduction is a critical step forward for Baltimore as it preserves the great tradition of Preakness at Pimlico and signals the commitment of significant investment in the Park Heights community.”

The money earmarked for Laurel would go toward building a new grandstand, additional stabling and housing for employees. Once the project is completed, there will no longer be any stabling at Pimlico. The Bowie Training Center will also be shut down as TSG has agreed to turn that land over to the Maryland-National Capital Park and Planning Commission for recreational purposes, and to the City of Bowie and Bowie State University.

“Will there be some people who don't think it's the best? I'm sure,” Guzzone told the Sun. “We'll deal with those issues as they come along. This is the beginning. This is real now. We have a bill now. Now it's time to listen to everybody once again and see where it all comes out.”

The legislation also calls for the creation of an Equine Health, Safety and Welfare Advisory Committee under the Maryland Racing Commission.

The Baltimore Sun reported that House of Delegates Speaker Adrienne A. Jones plans to introduce a similar bill later in the week.

The legislation has been in the works for months, ever since the city of Baltimore and The Stronach Group, which controls racing in Maryland, reached a deal last fall to end a fractious dispute that had the company threatening to move the race to Laurel and the city suing to seize Pimlico and take control of the Preakness.

Under the deal, The Stronach Group, which owns Pimlico, pledged to donate the track's land in Northwest Baltimore to the city for development. Pimlico's antiquated grandstand and clubhouse would be demolished and a new clubhouse would be built in its place. The track would be rotated 30 degrees to create nine parcels of land that could be sold for private development.

“Today's bill introduction is a critical step forward for Baltimore as it preserves the great tradition of Preakness at Pimlico and signals the commitment of significant investment in the Park Heights community,” Young said.

The parties envision the bond money going not only for the Pimlico track and community redevelopment, but also for The Stronach Group's track at Laurel Park. Laurel would receive a new clubhouse and training facilities, along with new stables and new housing for backstretch workers. The Thoroughbred industry's Maryland training and stable operations would be consolidated there.

The legislation introduced Monday makes minor tweaks to the deal, but keeps its framework largely intact.

One change removes a future source of funding for repaying the bonds to address concerns about the original plan, which would have taken money intended for the state's Education Trust Fund. The original plan would have switched the use of casino funds dedicated to horse racing in the state to pay the bonds for the tracks. Under the legislation, the state now would be required to contribute $17 million a year from the lottery. The casino money set aside for horse racing would sunset and those funds would go to education.

The bill also calls for $2.4 million to go annually to Park Heights Renaissance for work improving the community around the Pimlico track.

“Will there be some people who don't think it's the best? I'm sure,” Guzzone said of the bill. “We'll deal with those issues as they come along. This is the beginning. This is real now. We have a bill now. Now it's time to listen to everybody once again and see where it all comes out.”

The bill notes bonds and projects would need to be approved by the state Board of Public Works.

State Sen. Jill P. Carter, a Baltimore Democrat who represents the Pimlico area, said she wants to ensure the deal benefits the community there.

“What is most important to our constituents is not only that we retain the Preakness at Pimlico, but that we ensure that the Pimlico site becomes a 24/7, 365-day-a-year benefit to Park Heights and surrounding communities,” Carter said.

Park Heights community leader George Mitchell said the bill's introduction is the culmination of months of hard work and consideration.

“We've come a long way since Day 1,” he said. “First it was the Preakness moving to Laurel, and people said there's no sense in trying to fight it.

“We have come a long, long, long way and thank God we have.”

The legislation also calls for the creation of an Equine Health, Safety and Welfare Advisory Committee under the Maryland Racing Commission to study the welfare of horses engaged in racing and training in Maryland.

And it lays out a plan for what would happen to the defunct Bowie Training Center, which also is owned by Stronach. Part of that facility's land would be turned over to the Maryland-National Capital Park and Planning Commission for recreational activities, such as hiking and wildlife viewing, and to the city of Bowie and Bowie State University for activities such as baseball and football.

“Everybody wins. It's a compromise,” he said.

Senate President Bill Ferguson, a Baltimore Democrat, said he was “confident” the bill would pass this year.

This fall, Baltimore city and state legislative leaders hailed the deal as one that would keep the 144-year-old race, the second leg of racing's Triple Crown, at its longtime home. If approved by the legislature and signed into law by Republican Gov. Larry Hogan, construction is expected to be completed in three to four years.

The Preakness would continue to be run at Pimlico even during construction, under the deal. The Stronach Group would sign a lease for a minimum of 30 years to use the property for two months each year to prepare for and run the Preakness.

Belinda Stronach, president of The Stronach Group, said the plan provides a “long-term future of the Thoroughbred racing industry and the revitalization of the Park Heights community.”