Martine Bellocq Out of Coma 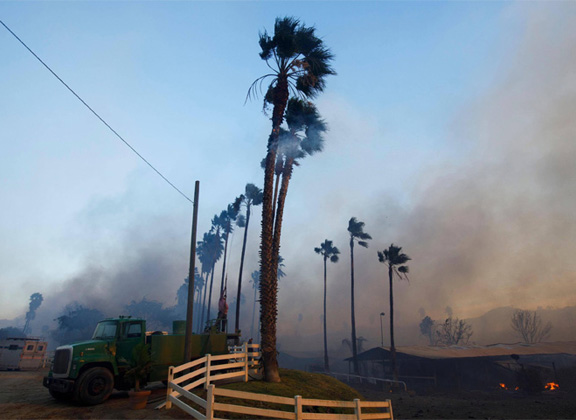 Two glimmers of hope for the Bellocq family emerged Saturday morning from the hazy aftermath of the devastating Dec. 7 fire at San Luis Rey Downs that killed 46 horses.

Trainer Martine Bellocq, badly burned while trying to rescue panicked Thoroughbreds from her burning barn, has emerged from her induced coma.

And her husband and training partner Pierre Jr., upon arriving at Del Mar Fairgrounds to check on his remaining horses, was reunited with a 2-year-old filly he believed had perished in the fire.

“Martine is doing better,” Pierre Bellocq Jr. said via phone from the Del Mar backstretch at 10 a.m. Pacific time Saturday. “She's out of the induced coma and is on the respirator. She can't speak or see right now, but she can hear us apparently, so that's a little progress. She is still in critical care. She's being taken care of at UC San Diego Hillcrest [medical center]. She's got third-degree burns from head to toe and she's really bad, but they're confident she's going to make it. They can't do any kind of surgery until Monday.”

Bellocq explained that just prior to taking a TDN reporter's call, he was stunned to receive a message asking him to go to a particular Del Mar stall to identify a filly that he thought been consumed by fire at San Luis Rey Downs along with two other horses the Bellocqs trained.

“I just found one five minutes ago that I thought was dead,” Bellocq said. “There was an email that said they found [my filly among the evacuees at Del Mar]. I told them it's a mistake, that she's a 2-year-old and not tattooed. But I just now ID'd her in the stall with the horse ID people.

“So she got out–I think Martine got her out of the stall–and apparently another horse ran into that stall,” Bellocq said. “There was a stampede in the barn and the smoke, and I guess another horse went into her stall afterwards and burned to death in her place. So two of ours perished. I thought it was three, but it's two. This one was found, I don't know how.”

No official word was available as to the identity or ownership of the horse that did perish in that stall.

Bellocq shrugged off a question about his own health (he had been treated for smoke inhalation and released) and said he's focusing on getting his family's life back in order.

“It's not easy,” Bellocq said. “I'm here at Del Mar right now. Today's news is a little bit of encouragement. I'm trying to get the horses together and taken care of, and I'm going to stay by Martine until she gets better at the hospital. We're coping with it.”

Bellocq said he is still trying to make sense of the blur of the past 72 hours as the Southern California racing circuit segues from crisis mode to recovery and assistance.

“Let me only say that I have never seen anything like what's going on here as far as people helping, and volunteers, and all the horsemen. It's just phenomenal. It's unbelievable,” Bellocq said.