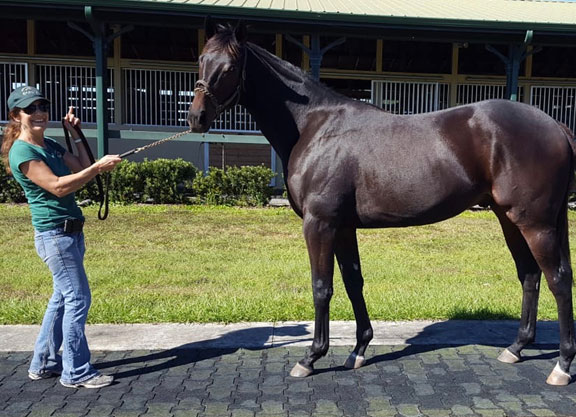 Spun to Run as a yearling at Sabana Farms | Migdaly Serra

Just under a decade ago, Migdaly Serra was busy building up her marketing and human resource company in Venezuela. The successful businesswoman and entrepreneur knew next to nothing about Thoroughbred horse racing.

But Serra caught the horseracing bug, and in just a short time became not only a successful farm owner and manager, but also the breeder of last year's GI Breeders' Cup Dirt Mile winner Spun to Run (Hard Spun), as well as Tonalist's Shape (Tonalist), a leading 3-year-old filly in 2020.

A native of Venezuela, Serra graduated with a Bachelor of Administration at Simon Rodriguez University before going on to receive postdoctoral degrees in Marketing and Human Resources. She then worked for over 20 years with various mass communication companies, and she also ran her own business for a time.

In 2012, she was introduced to the world of horse racing through her husband, Ivan Hernandez. “I really had no idea about the horse industry, other than accompanying my husband to the track a few times,” Serra said. “I became involved in the administration side of one our Venezuelan companies, Sabana Farms.”

Serra said her interest grew when Sabana expanded with the purchase of a farm in Ocala. “We wanted to diversify the activities of Sabana Farms Venezuela by entering the market in the United States to serve as a bridge to bring horses back to Venezuela.”

The Ocala-based farm that initially started as a gateway for the Venezuelan branch soon became Sabana's main focus.

In 2014, Serra was visiting her son in Florida when she made a stop at the Ocala farm. She said she soon found inefficiencies in the management of the business. “I was only there two weeks, but it was enough time for me to realize the orientation of the farm was not how we had originally planned. I returned to Venezuela with concern.”

One year later, Serra made the decision to move to Ocala to help manage the business. She said she knew that to handle the demands of the farm, she had to learn everything she could about the horse industry, so she enrolled in the College of Central Florida in Ocala. “Initially I just took classes to learn English, but seeing the needs of my farm, I knew this was insufficient, so I continued my education to orient myself to the world of the horse business,” said Serra.

Also at this time, Serra separated from her husband, Hernandez. “The normal decision would have been for us to sell our farm and liquidate our assets,” she said. “But the dream was just starting to come true for me, so leaving the farm was never an option. We both remain shareholders in the company today.”

While Hernandez handled the financial side of the business back in Venezuela, Serra was to take on the role of general manager of the farm in Ocala. For her first order of business, Serra decided to give the farm an overhaul. The 75-acre plot had been home to over 35 horses between mares, yearlings, and weanlings. But as the first crops of foals were starting to enter the market, Serra said she saw that they weren't measuring up in the sales ring and the farm was generating losses.

“I decided to rethink the entire business, so from 2016 to 2018 we shrunk to just six broodmares,” Serra said.

Among those six mares, two in particular proved to be well worth their keep: Yawkey Way (Grand Slam), the dam of Spun to Run, as well as Hitechnoweenie (Harlan's Holiday), the eventual dam of the undefeated Tonalist's Shape.

Serra said, “It was a hard investment at the time because it exceeded what we had initially planned to spend, but looking back now, it was one of the best decisions we ever made.”

The mare was one of the first to open doors for the farm when the Violence colt became Sabana's first yearling at the Fasig-Tipton Saratoga Select Sale and brought $195,000 in 2016.

For Yawkey Way's first breeding season at Sabana, Serra sought the help of pedigree consultant David Seguías. The team poured over lists of stallions before landing on Hard Spun.

The cross produced an eventual millionaire in Spun to Run. “Spun to Run was always a foal that stood out to me with his conformation and perhaps the best attitude of our 2016 foal crop,” Serra said. “I remember him excelling at every activity that was asked of him.”

While Serra said she believed in the colt from the start, a series of setbacks got between the colt and buyers during the sales season.

Days before the yearling was set to ship to Keeneland for the September sale, he was discovered to have a small chip. After surgery and initial under-tack training, he was placed under a consignor to prepare for the OBS March sale. But again, a minor ailment forced him to be withdrawn.

Serra decided to take matters into her own hands. She hired Jose Cuellar to work with the colt under her direct supervision. They prepared to send him to the Fasig-Tipton Midlantic 2-Year-Old Sale.

“We contacted Tristan de Meric, who came out to see him train. After seeing how he ran, he agreed to register him under the De Meric Sales consignment,” Serra said.

“Both myself and my ex-husband thought about taking him out of the ring, bringing him home, and running him ourselves,” Serra said. “But we had to sell. That was our initial plan, and we had to stick to it. Although we felt like we lost in that moment, time returned our efforts by a thousand.”

Serra was not able to attend the 2019 Breeders' Cup after having just arrived back into the United States from a trip home to Venezuela. But she remembers the moment when Spun to Run crossed the finish line in great detail.

“I will always regret not being able to have been there,” she said. “But just seeing the triumph when he won was enough. I felt like I had been right there with my dear animal, enjoying the moment with everyone.”

Serra said she remembered sitting in her farm office watching the race. As soon as it ended, she walked outside to find Yawkey Way grazing in her paddock.

“The first thing I did was hug my mare and cry with joy,” Serra said. “From there the calls began to come in from my children and ex-husband saying, 'I knew it, I knew you were going to make it, I told you.' At first, it all felt like a dream.”

Looking back on the day now, Serra said she feels that her team represented their Venezuelan roots well. “This victory represented myself, as well as Ivan Hernandez, consultant David Seguías, and our foaling veterinarian Dr. Oscar Benavides. I am proud of the achievement we made as a team of united Venezuelans.”

While it might be difficult to top such a successful 2019, Tonalist's Shape is adding more accomplishments for the farm this year.

The three-time stakes winner is out of the stakes-winning Harlan's Holiday mare Hitechnoweenie. Purchased as a maiden at the 2015 Keeneland January sale, Hitechnoweenie was one of the few mares that remained on the farm when the company chose to downsize the next year.

The maiden was set to go to a proven stallion, but at the last moment, it was decided to send her to Tonalist, a first-year stallion that the Sabana team wanted to support.

The result was a filly with a bit of spunk and a mind of her own. “She was arrogant and quite a determined character,” Serra said. “I would be trying to feed her and she would play with me, challenging me and trying to kick. She could be naughty, but that challenging attitude just showed her confidence.”

Again, Serra couldn't get past bad luck in the sales ring. The filly didn't meet her reserve at the Keeneland September sale, so Serra brought her home to Ocala to train her with the help of employee Angel Alvarez. The duo rented out stalls at Nelson Jones Center to prepare the filly for the OBS April sale.

Consigned by Niall Brennan, the filly again failed to meet her reserve.

“Everything went wrong for us at the sale,” Serra said. “The winds were very strong and her time was above what we had hoped.”

When the filly was again unable meet her reserve, Serra picked up the phone to call Hernández, determined to stick with her gut feeling. “I told Iván that I had no experience as an owner, but that I was going to try my luck,”she said. “He agreed with me and minutes later I was shipping my filly back home.”

Tonalist's Shape was sent to train under Juan Avila. Making her debut in September of 2019, Serra's patience was rewarded when the filly broke her maiden on debut. The calls from owners came minutes later, and the filly was sold to Slam Dunk Racing, Legacy Ranch, and Doug Branham.

While no longer her owner, Serra remains the undefeated filly's biggest fan. Looking back on her last start in the GII Davona Dale S. this February, Serra said, “When she was walking up to the starting gate, she reminded me of when she was a yearling in the paddock and everything was a simple game. In that moment, I knew she was going to win. Nothing was going to stop her.”

As Serra tracks the filly's development from her Ocala farm, she plans for the future, saying she hopes to make the most of the updated pedigrees throughout her barn. Hitechnoweenie's two most recent foals remain in training on the farm, both a two-year-old filly by Outwork and a yearling son of Connect. Yawkey Way had a Frosted filly sell for $180,000 last September and also has a yearling colt by Practical Joke.

“I know that this world is not easy, and everything might not fall into place tomorrow as it has recently, but at Sabana we will continue to grow and search for new ways to get better results,” Serra said. “We are not people who sit on our triumph, rather we want to use both our triumphs and our failures to continue to improve.”

Despite everything that has changed for the young farm, their philosophy remains the same. “I don't think our goals differ that much from any other Thoroughbred breeder, we want to raise winning horses,” Serra said. “All the things we do at Sabana we do with passion and dedication, and we choose not to skip out on the small details of the process.”

She continued, “My life has changed so much in the past year, but these changes have made me grow. Now I feel more responsibility than ever to hold this farm to a standard, and the most difficult part for our team will be to maintain ourselves and someday improve from here.”