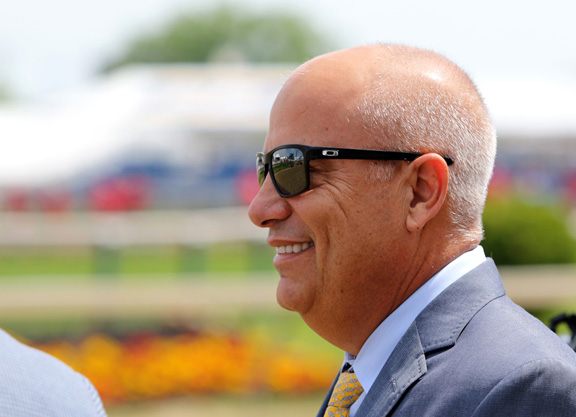 Trainer Mark Casse has been named as the recipient of the 2019 Big Sport of Turfdom award, the Turf Publicists of America announced Thursday.

The award recognizes a person or group of people who enhances coverage of Thoroughbred racing through cooperation with media and racing publicists.

Casse, who was born into the business as the son of Norman Casse, an owner, trainer and breeder for more than 40 years as well as the former chairman of Ocala Breeders' Sales, achieved a career milestone in 2019 when he won his first Triple Crown race when War of Will rebounded from a troubled trip in the GI Kentucky Derby to win the GI Preakness S. Three weeks later, Casse won his second Triple Crown race when Sir Winston pulled off an upset in the GI Belmont S.

“Mark Casse exemplifies the essence of the Big Sport of Turfdom award,” TPA President Amy Gregory said. “Mark is generous with his time and accessibility, making himself available during both the highs and lows of racing, always offering humor and candor. He is a favorite among Turf writers and a popular ambassador among racing fans. We congratulate Mark on his outstanding season, highlighted by his Triple Crown race wins with War of Will and Sir Winston, and on winning this year's award.”

The Big Sport of Turfdom award will be presented to Casse at the University of Arizona Race Track Industry Program's annual awards luncheon Dec. 10. The luncheon is part of the 2019 Symposium on Racing & Gaming at Loews Ventana Canyon Resort in Tucson, Ariz.

Casse was inducted into the Canadian Horse Racing Hall of Fame in 2016. He has earned the Sovereign Award as Canada's top trainer a record 11 times and has trained 29 Sovereign Award winners, including five Canadian Horses of the Year. His Eclipse Award winners include two-time champion female turf runner Tepin, champion female sprinter Shamrock Rose and champion 2-Year-Old male Classic Empire.

“This is a very nice honor,” Casse said. “I truly appreciate it.”