Mariano Rivera Honored at The Spa 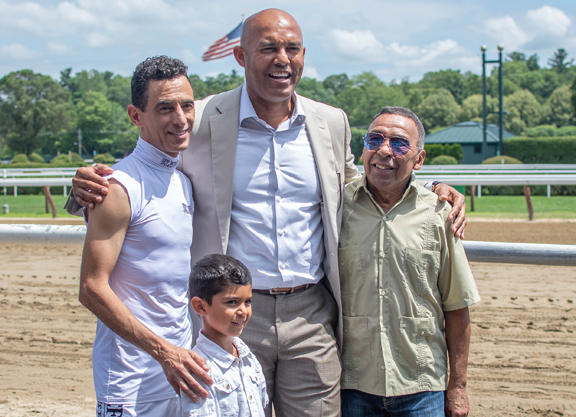 Saratoga Springs, NY–On Mariano Rivera Day at Saratoga Race Course Friday, it was tough to tell who was more appreciative, the guest of honor or the crowd that gathered to salute the New York Yankees legend.

Rivera, 49, will be back in upstate New York next week to be formally inducted into baseball’s Hall of Fame at Cooperstown. He is the first player to be a unanimous selection. The New York Racing Association brought Rivera for Saratoga for the second day of its 2019 season and near the end of his remarks he invited the crowd to make the 77-mile trip to Cooperstown for the ceremony on July 21.

Before the race for New York-breds carrying his name, Rivera chatted with two of racing’s Hall of Fame jockeys, John Velazquez and Angel Cordero, Jr. After making the trophy presentation to James Ryerson, trainer of the winner, Conquest Hardcandy, he signed a program for Ryerson.

During the short program between races, NYRA presented Rivera with framed jockey silks, replicating his Yankees home pinstriped jersey with his number 42.

“It’s a privilege and an honor for me to be in your presence, to be in front of you,” Rivera said. “You are the best. You guys pushed me to a different level. You were there in tough times, in great times, in the difficult times.”

Following his visit to sunny Saratoga, he headed back to New York to Yankee Stadium where fans attending the game against the Toronto Blue Jays would receive a Mariano Rivera Captain America Bobblehead.

Rivera said that a 2013 bobblehead promotion during his final season with the Yankees “was a disaster. The truck got in late, they had a line circling Yankee Stadium and people were upset.”

Though he was a starting pitcher in the minor leagues–including a nine-game stint in 1994 when he was 3-0 with the Albany-Colonie Yankees based about 25 miles from Saratoga–he became baseball’s greatest relief pitcher. He spent all 19 seasons with the Yankees, was a member of five World Series champion teams and had a record 652 saves in the regular season and 42 in the playoffs. When Rivera became eligible for the Hall of Fame this year, he made history by being named on every ballot cast.

“I don’t consider myself better than anybody else,” he said. “I’m privileged that I was able to play the game for so long and respect the game and do my best for my team … All the great players who are in the Hall of Fame, for me being the one that was the one that was unanimous, there’s no words to describe it. All I can say is thank God, because it’s amazing. From Babe Ruth to the great generation of baseball players… Me, being the one…. That won’t change my life, but it’s great. It’s just something that I’ll treasure. Being the first one, hopefully they’ll be many others, but I am the first one. Just thank God for that.”