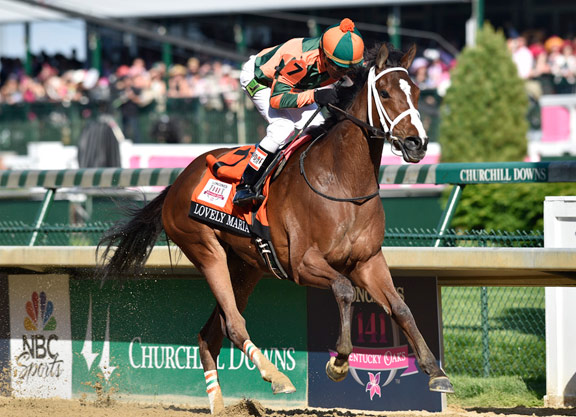 Brereton C. Jones’s GI Kentucy Oaks victress Lovely Maria (Majesticperfection) makes her highly anticipated return from a brief freshening in Saturday’s GIII Delaware Oaks. Her conditioner, Larry Jones, seeks his second win in this event, having scored the first with 2008 Kentucky Oaks winner and fellow Brereton Jones homebred Proud Spell (Proud Citizen), who was named champion sophomore filly that year after also taking the GI Alabama S. Lovely Maria has done little wrong in her eight-race career and seems to be improving with each start. Kicking off her sophomore season with an optional claimer win at Fair Grounds over Oaks runner-up Shook Up (Tapit) Jan. 26, the bay finished second to stablemate and Oaks third-place finisher I’m a Chatterbox (Munnings) next out there in the GIII Rachel Alexandra S. Feb. 21. Victorious in Keeneland’s GI Ashland S. Apr. 4, the homebred was ultra-impressive in winning the Kentucky Oaks when last seen at Churchill Downs May 1.

“Everything looks good right now,” Jones said. “I am not saying we got her cranked up to 110% or anything, but surely we think she is ready and good to go. We are ready to kick off the second half of the year campaign starting right here. From here, we are thinking the Alabama and from the Alabama, if we are still doing well, we are just going try to figure out how to get to the Breeders’ Cup.”

Jones also saddles Calumet Farm’s White Clover (Exchange Rate) in this test. Seventh in the Rachel Alexandra, the gray was second in a sloppy Keeneland allowance Apr. 3 and won going five panels here May 16. She wired the field last time when extended to a mile and 70 yards in this venue’s Our Mims S.

Qatar Racing’s Our Mims runner-up Peace and War (War Front) returns to graded company here for Graham Motion. Previously trained by Olly Stevens, the bay blew up the tote when capturing her American debut at odds of 23-1 last October in Keeneland’s GI Darley Alcibiades S. Oct. 3. Forced to miss the GI Breeders’ Cup Juvenile Fillies due to an injury, she returned in the Ashland, where she finished seventh, and finished last of eight when facing males for the first time at Churchill Downs in the GIII Pat Day Mile May 2. She was subsequently transferred to Motion and made her debut for his barn in the Our Mims.

Gainesway Stable’s Danzatrice (Dunkirk) enters this test off a fourth-place effort last time in Belmont’s GI Acorn S. June 6. Starting this term with an allowance win at Laurel Mar. 26, the chestnut beat out GI Frizette S. winner and Acorn runner-up By the Moon (Malibu Moon) in the Parx Oaks May 2 prior to her run in the Acorn.

Also exiting the Acorn is Mary and Chester Broman homebred Bar of Gold (Medaglia d’Oro), who won a trio of state-bred tests at Saratoga and Aqueduct before finishing sixth in the Acorn. Another runner who could make some noise at a price is Heider Family Stables’s undefeated Hip Hop N Jazz (Speightstown). The Tom Proctor pupil was a debut winner at Pimlico Apr. 20 and an optional claimer winner at Monmouth May 30, both at six furlongs.