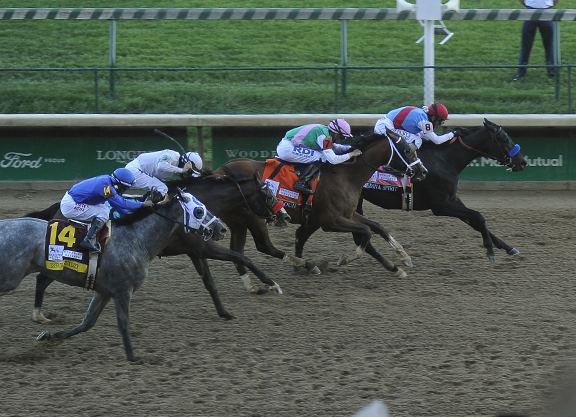 Mandaloun finishing second to Medina Spirit in the Derby | Horspehotos

“We made the decision in the last hour to bypass the Preakness and point for Grade I's throughout the rest of the season,” said trainer Brad Cox said of the Juddmonte homebred. “He has responded really well. We actually took him back to the track [Thursday] and jogged him about a mile and a half. He was moving extremely well, and energy level in good order–everything you want to see from a horse who just performed at a high level in a mile and a quarter race last Saturday.”

Cox continued, “The decision was made in consideration of the effects of two grueling races over a short period of time. He ran well and hard in the Derby and we want to give him some time off. It's in the best interest of the horse not to run him two weeks back. We'll target Grade I's later in the season with him.”

Cox added that Caddo River, who passed on a run in the Kentucky Derby after finishing second in the GI Arkansas Derby, will target the GIII Matt Winn S. May 29 at Churchill.

“He's been doing well,” offered Cox. “We just haven't done enough with him to pursue the Preakness, so we're going to target the Matt Winn at Churchill.”

Picking up the Preakness mantle, Midnight Bourbon (Tiznow) has been confirmed to run next Saturday according to Steve Asmussen Thursday.

Expected to show early speed, Midnight Bourbon closed from well back to finish sixth in the Derby after a tardy start.

“We didn't think he got the opportunity that he deserved after he missed the break and his back end went out from underneath him,” said David Fiske, the longtime racing and bloodstock manager for the late Verne Winchell and subsequently for Verne's son Ron Winchell. “He got jostled around by the horses on either side of him, then lost some ground. He was pretty wide on the second turn; I think eventually he ran 52 or 56 feet farther than the winner. So that would have put him a little closer. And speed seemed to be lethal on Saturday. There weren't a whole lot of horses that were closing on the front-runners. Then the fact that it took two handlers to get him back to the barn to give him a bath, it didn't seem to take that much out of him. So, we thought we'd give it a try.”

“The horse is doing great,” said Scott Blasi, the assistant trainer who oversees Asmussen's Churchill Downs operation. “I don't think he did a lot of running early [in the Derby], so he seems to have come out of the race pretty fresh.”