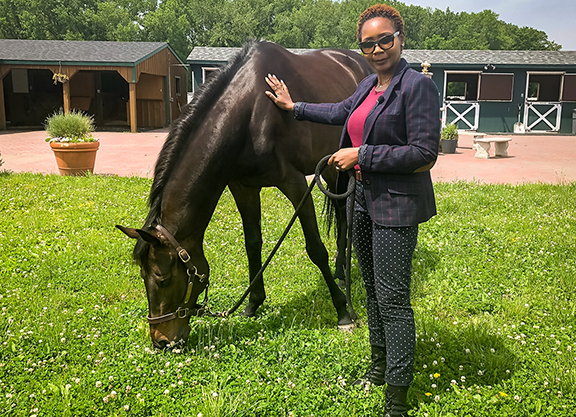 by T.D. Thornton and Sue Finley

Although using equine-assisted therapies (EAT) to help people overcome post-traumatic stress disorder (PTSD) has been long believed to be effective via anecdotal results, a recent exploratory scientific study declares that it “is the first to demonstrate that EAT can affect functional and structural changes in the brains of patients with PTSD.”

The findings are groundbreaking not only from a scientific standpoint, but also from the perspective that the peer-reviewed work by Columbia University Irving Medical Center and New York State Psychiatric Institute researchers published Feb. 5 in the medical journal Human Brain Mapping could not only pave the way for national funding for PTSD therapy, but provide homes for untold retired Thoroughbred racehorses.

The study, whose principal funding was provided by the Earle I. Mack Foundation, was based on a three-year program at the Man O' War Foundation, also a project of Mack's. It was supported by a $200,000 grant from The Jockey Club.

Groups of participants each took part in an eight-week program at the Bergen Equestrian Center in Leonia, New Jersey in a study that was conducted over three years. They were subjected to tests, including MRIs of the brain, before and after the program.

Dr. Xi Zhu, Assistant Professor of Clinical Neurobiology, and first author on the paper said, “This project provides the first neurobiological evidence of the effectiveness of equine-assisted therapy for treating veterans and civilians who suffer from PTSD.”

Said Neria, a lead author, “The results provide the first-of-its-kind proof that equine-assisted treatment may have not only a clinical promise but also brain-based changes that may increase a patient's capacity to enjoy life despite facing traumas and war adversities, which make this treatment so unique.”

Especially common in combat veterans, PTSD is a psychiatric disorder that occurs in people who have experienced a traumatic event or a long period in which they felt trauma. It can cause flashbacks, nightmares, anger, fear, estrangement, and a lack of trust.

“Improving reward circuitry might be a significant, initial step to finding new and enhanced methods to treat this complex disorder,” the study says.

In a 2019 interview with the TDN, Dr. Jeffrey Lieberman, MD, Professor and Chair of Columbia Psychiatry and one of the driving forces behind the program, criticized the effort that had previously been put forth by the United States, and praised Mack for his innovative efforts.

“I know it works,” Lieberman said. “This is a very simple, intuitive therapeutic process that the government hasn't seen fit to deal with sufficiently, and civic-minded people are stepping in. But taking it at face value, that's not the way medicine and science works. You've got to prove it. And Earle was willing to submit this hypothesis to rigorous testing in the form of a clinical trial and that makes all the difference.”

Because the model is tested and proven, it can be replicated all over the country, delivering badly needed new treatments for a devastating disorder. The therapy is particularly suited to ex-Thoroughbred racehorses, who, like veterans, had a very short, intense career, and are mission-oriented.

“I am grateful for the dedication and excellence of the Columbia University team in seeing this project through with compelling results beyond our expectations,” said Mack, “validating EAT as a very effective and much-needed therapy for veterans with PTSD. We look forward to future phases allowing for the mainstream implementation of the Man O' War protocol.”