Malibu Moon Filly Runs to the Money in Silverbulletday 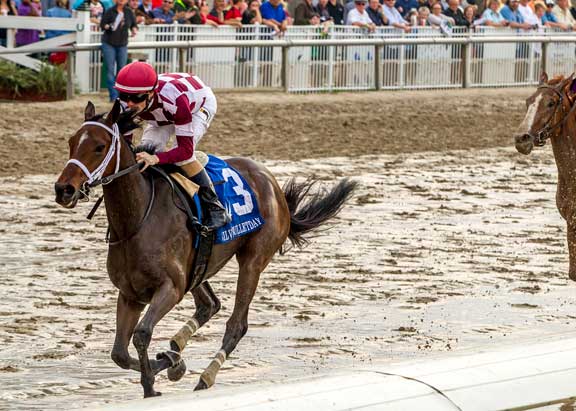 The well-bred Farrell continued her ascent into being a top contender for the GI Kentucky Oaks with a professional victory in the Silverbulletday S. at Fair Grounds.

Fourth as the favorite behind three return winners in her career bow Sept. 17 at Churchill, the dark bay returned quickly to a powerful graduation there Oct. 1. Third after disputing a fast pace in the Races to Riches S. under the Twin Spires Oct. 30, the homebred had her breakout moment with a six-length tour de force in the GII Golden Rod S. Nov. 26 in Louisville.

Bet late to odds-on favoritism here, Farrell relaxed nicely off of longshot Gris Gris to sit second through solid fractions of :23.80 and :47.67. Turning up the pressure in hand passing six furlongs in 1:13.31, the chalk swept to the lead at the three-sixteenths pole and finished strongly in the final furlong to win convincingly under wraps. Wicked Luck nailed the pacesetter for second in the last jump.

Farrell's very productive dam is responsible for a 2-year-old colt by Speightstown who sold for $675,000 at Keeneland September, and produced a filly by Giant's Causeway last spring. Click for the Equibase.com chart.