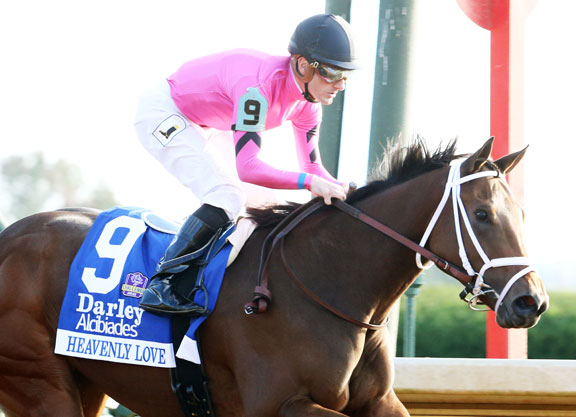 Debby Oxley's Heavenly Love (Malibu Moon) gave her sire his 14th Grade I winner and, along with 'TDN Rising Star' Moonshine Memories, will give the Spendthrift stalwart a formidable 1-2 punch in the GI Breeders' Cup Juvenile Fillies following a powerhouse 5 1/2-length victory in Friday's GI Darley Alcibiades S. at Keeneland.

Sent off at odds of 5-1 on the heels of an impressive five-length maiden victory over the rolling hills at Kentucky Downs Sept. 7, Heavenly Love landed in a perfect spot chasing her stablmate Dancing (Bernardini) from second through even early fractions. With Julien Leparoux sitting hard against the homebred rounding the far turn and with the short stretch looming, Heavenly Love quickly put three or four lengths on her rivals and widened to the wire. Princess Warrior (Midshipman), favored at 3-2 off a big-figure maiden win at Churchill Downs Sept. 16, rallied from behind to be second best.

“We had a great trip, sitting second,” said Leparoux, winning the Alcibiades for the second time in four years (Peace and War, 2013). “She exploded [and took the lead around the final turn] but we still had some left. When she gets to the lead, she kinda looks around. She's still a little baby, but she's a very nice filly. She impressed me at Kentucky Downs when she won (a maiden race by 5 lengths on Sept. 17). She repeated it today.”

Of her sire's 14 Grade I winners, no fewer than 10 have been females. Heavenly Love was bred by Debby Oxley from her $300,000 Keeneland September yearling Darling My Darling (Deputy Minister), runner-up in the GI Matron S. and GI Frizette S. and fifth to Surfside (Seattle Slew) at 7-2 in the 1999 GI Breeders' Cup Juvenile Fillies. Darling My Darling went on to become a Keeneland horse for the course, with victories in the 2000 Raven Run S. and the 2001 Doubledogdare S. Darling My Darling was herself a daughter Roamin Rachel (Mining), herself winner of Keeneland's GII Beaumont S. in 1993 and subsequently the dam of 2004 Japanese Horse of the Year and G1 Japan Cup hero Zenno Rob Roy (Jpn) (Sunday Silence). Heavenly Love is kin to a yearling colt by Oxley's star juvenile Sky Mesa, but Darling My Darling aborted her foals in each of the last two years.