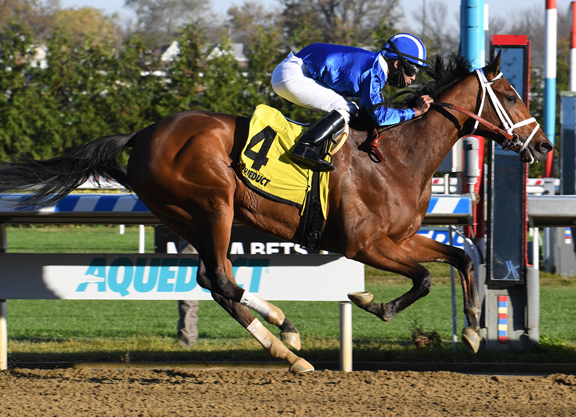 Undefeated 'TDN Rising Star' Malathaat (Curlin) looks to remain perfect as she steps up to graded company in Saturday's GII Demoiselle S. at Aqueduct. A decisive debut winner going seven panels at Belmont Oct. 9, the $1.05-million KEESEP buy romped by 7 3/4 lengths in the one-mile Tempted S. at this oval Nov. 6.

“You would think with her pedigree and the way she won going a mile that a stretch out should not be an issue,” trainer Todd Pletcher told the NYRA notes team. “She's always trained like a quality filly that wants two turns, so we're excited about stretching her out. This filly has been a star from day one basically.”

Bill Mott saddles a promising daughter of Curlin in Juddmonte homebred Millefeuille. Runner-up in her one-mile Belmont unveiling Sept. 26, the bay graduated by four lengths over that track and trip Oct. 23.

“It definitely was a nice debut,” said Juddmonte Farms general manager Garrett O'Rourke. “You always want these horses to have ability, but it's nice to see them know where the line is and have some try in them. She ran hard to the line. Todd's filly looks like she's got some possible superstar potential and so we'll probably have to run a little harder this time around.”

Tom Albertrani also sends out a Curlin filly who graduated at second asking in Malibu Curl. Making a mild late bid to be sixth in her career bow at Saratoga Aug. 2, the chestnut earned her diploma next out in a seven-furlong test at the Spa Sept. 6.

Allen Stable's Cafe Society (Empire Maker) donned cap and gown on debut at Belmont Oct. 18 and was third last time in the Tempted.

“I was disappointed in her last race, but she's come back and trained well,” said Hall of Famer Shug McGaughey. “She had a really good breeze and galloped out well, so hopefully we'll see a little better performance than we did the last time. I couldn't have asked for any more.”