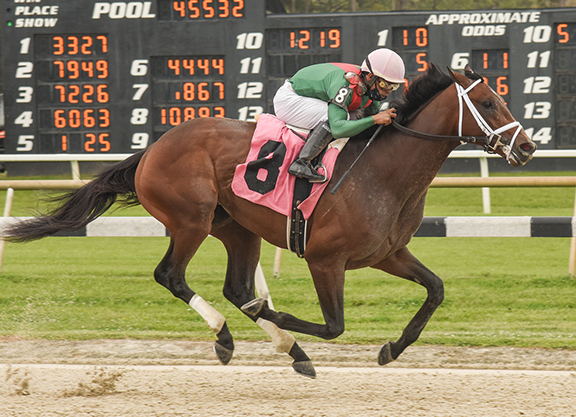 Untreated (Nyquist) put on a show earlier that day as well, graduating by a pole for Todd Pletcher at second asking with a flashy, come-from-behind maiden tally in his two-turn debut (video). He earned a very solid 86 Beyer Speed Figure.

A well-beaten sixth as the 4-5 favorite behind next out GIII Sam F. Davis S. winner Candy Man Rocket (Candy Ride {Arg}) going six furlongs in his unveiling for the late Paul Pompa, Jr. and trainer Chad Brown at Gulfstream Jan. 9, Untreated brought $300,000 from bloodstock agent Steve Young on behalf of Team Valor just five days later at the Keeneland January Sale. He was previously a $550,000 Keeneland September Yearling purchase, the most expensive of 44 yearlings from the first crop of promising young sire Nyquist to switch hands.

“The bottom line is, we got lucky,” Team Valor head Barry Irwin said. “Everybody knew about the horse before he ran. I was prepared to go to what he cost as a yearling, $550,000, and we got him for $300,000. Steve Young, who I've known pretty well for years, is the one who pushed me to buy the horse.”

That must have been one heck of a push considering Irwin's recent words regarding the current state of affairs for racing in this country and his plans for his longtime partnership to compete predominantly abroad going forward.

“I do not like racing in America anymore at this time,” Irwin said. “I am sick of it. The only horse I bought the previous year to stay here was [GI Claiborne Breeders' Futurity and GI Arkansas Derby second and 'TDN Rising Star'] Gouverneur Morris [by Constitution]. I can't stand this crap that's going on. But this horse was very intriguing.”

Untreated came out firing once joining Pletcher's Palm Beach Downs string, highlighted by a trio of bullet workouts. He did, however, have a gap between his Jan. 30 and Feb. 20 breezes.

“His first work was a bullet work, but the guy had to tap him on the shoulder to get him to gallop out,” Irwin said. “The next work, another bullet work, but he can't even gallop out a furlong this time. He gets back [to the barn] and he's got an entrapped epiglottis. Now, I would be willing to bet, based on my experience with that, that this horse was already starting to do this when Chad him, but didn't show enough evidence of it yet. So, we got lucky. We had Dr. Yarborough do the procedure in his stall.”

Irwin continued, “It worked and his next two works were just unbelievable. Especially the last one. We knew we had something.”

Drawn wide in post eight in his first try for Team Valor and Pletcher, Untreated was about three deep while rounding the clubhouse turn and raced near the rear heading into the backstretch. The bay traveled nicely from there and launched an eye-catching, four-wide move leaving the four-furlong marker into third. He took over with ease approaching the top of the stretch and increased his margin to the wire, scoring by 8 3/4 lengths. The final time of 1:39.17 was just a few ticks off the Tampa track record of 1:38 3/5 for a mile and 40 yards.

“We were thrilled to see how he did it,” Irwin said.

Untreated is out of the graded-stakes placed Unbridled's Song mare Fully Living and is from the same family of champion Halfbridled (Unbridled). He was co-bred in Kentucky by Ashview Farm and Old Oak Farm.

Untreated is scheduled to return to the worktab Saturday, per Irwin.

Will we see him in a Derby prep next time out?

“I'll quote Mr. Todd Pletcher, 'We're gonna let the horse lead us to that decision,'” Irwin responded. “If we do the conservative thing, we'll look to run him in a small race somewhere. If we want to go crazy, we'll look at either the [GII Toyota] Blue Grass [at Keeneland Apr. 3] or [GII] Wood [Memorial at Aqueduct Apr. 3].”

Irwin concluded, “The problem is, he was ready to run in a prep race for the Tampa Bay Derby. If we had gotten that prep race in, then we'd be in a nice spot. Now, we have to be Big Brown in order to pull off something like that [make the Kentucky Derby]. My clients, by in large, are all dreamers and the Derby is the ultimate lure.”