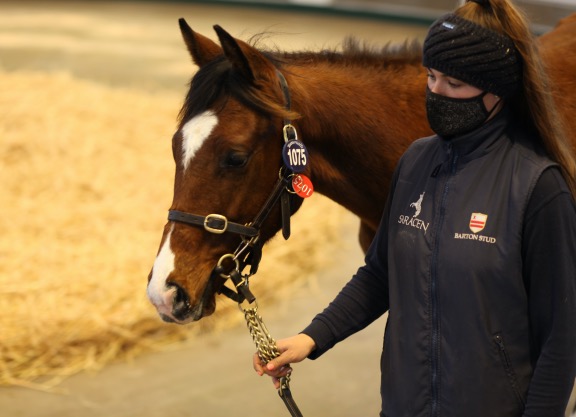 NEWMARKET, UK—”Not for the first time this year we can reflect on a market which has displayed extraordinary and commendable resilience,” said Tattersalls Chairman Edmond Mahony in his closing address for the December Foal Sale. Those sentiments have been repeated often around Park Paddocks this week, just as they were back in October when the trade for yearlings was frankly remarkable given the events of 2020.

As the curtain fell on the fourth and final day of foals, again the most noteworthy figure was the clearance rate of 79%, which rose from 72% last year, through it must be remembered that this year's catalogue was nearly 200 foals lighter.

During the final session, it was the Coolmore freshman Sioux Nation who claimed the spotlight from his stud-mate Saxon Warrior (JPN), who had made quite a splash with members of his first crop earlier in the week. For the young son of Scat Daddy however, it was lot 1075, a colt from Barton Stud, who was one of the early leaders at 88,000gns and remained there throughout the shortened session.

Rebecca Matthews won't be regretting her 1,500-guinea purchase of the colt's dam, the once-raced Autumn Snow (GB) (Invincible Spirit {Ire}), from the Godolphin draft of the 2018 February Sale. The sister to G2 July S runner-up Figure Of Speech (Ire) has subsequently produced a filly by Highland Reel (Ire), followed by her son by Sioux Nation, who was bred by The Brigadier Partnership, led by Matthews.

Barton Stud manager Tom Blain said, “He was the stand-out foal today, we deliberately came today to sell on the Saturday to stand out and it is a fantastic result. This was an investment by the breeders to get a bloodstock business going so this is really a great start.”

One of Sioux Nation's more established companions on the Coolmore roster, the dual Derby winner Australia (GB), has also enjoyed a good week, with 11 foals sold for an average just shy of 50,000gns, and his colt from the family of Rekindling (GB) ((High Chaparral {Ire}) was the pick of pinhhookers Matthew Houldsworth and Aughamore Stud, who went to 62,000gns for lot 1097.

Offered by his breeder Stringston Farm, the colt is out of Bitooh (GB), a Diktat (GB) half-sister to MelbourneCup winner Rekindling, both of whom were sold by the Pocock family as foals at Tattersalls. Having previously been owned by Godolphin, Bitooh was bought back by the Pococks after Rekindling's Cup victory.

“The family does very well with Australia and he is a lovely horse to deal with,” said Stringston's Nick Pocock, who added that Bitooh is likely to return to the stallion next year.

The mare's half-brother Sydney Opera House (GB) is, as his name implies, a son of Australia and was runner-up in the G1 Criterium de Saint-Cloud. Meanwhile, Rekindling, now six, returns to Tattersalls next week to be sold as a stallion prospect as lot 1504.

Byerley Stud's February-foaled filly out of the Galileo (Ire) mare Garabelle (Ire) was the selection of John Cullinan of Horse Park Stud at 60,000gns. Lot 1045 is a half-sister to the listed-placed Bella Vita (GB) (Aussie Rules) and was bred by Shoreham Stud.

“He should only continue improving,” said Cullinan. “We have had a couple by Sea The Moon and we liked them; they are straightforward horses. The stallion is one of the current upwardly-mobile sires.”

He added, “The mare has also had a black-type runner and is a Galileo mare; it is hard to get stock out of good Galileo mares at my level.”

Assessing the market for the first of this year's foal sales in Europe, Edmond Mahony said, “We felt that the relative strength of the Tattersalls October Yearling Sales would provide a solid platform for the December Foals and this has been borne out by another 2020 sale at Park Paddocks which has held up remarkably well under the current circumstances, and particularly considering the continued widespread travel restrictions.

“Despite having the smallest Tattersalls December Foal catalogue since 2001, with 191 fewer foals catalogued than last year, the sale has achieved turnover just over 10% below last year's lofty returns and single-digit declines in average and median. Not for the first time this year we can reflect on a market which has displayed extraordinary and commendable resilience, most graphically illustrated by a clearance rate which compares favourably not only with 2019, but also with the majority of recent renewals of Europe's premier foal sale.”

He continued, “Trade has been competitive throughout the week, starting with sustained demand for the yearlings and flowing consistently through four days of the cream of the British and Irish foal crop. As ever, the sale has been dominated by pinhookers and we applaud them for their huge contribution, but even more so in this strangest of years. The sale has been conducted under the strictest of health protocols and the compliance and awareness of all the rules and regulations has been admirable, as has the acceptance that we have not been able to provide the full Tattersalls sales experience in the current environment.

“Nevertheless, we have sold 64 foals for 100,000 gns or more this week, including Airlie Stud's outstanding sale-topping Dubawi colt, whose 700,000-guinea price tag is the second highest for a colt foal at this fixture. In addition to the individual highlights, we have had widespread participation, some of it online, from buyers from throughout Europe, Japan, North America and the Gulf region, all of which gives encouragement as we turn our attention to the annual showcase of Europe's finest breeding stock at the Tattersalls December Mares Sale.”