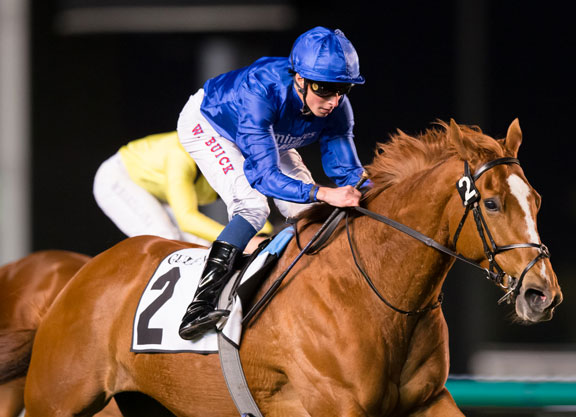 Magic Lily (GB) (New Approach {Ire}) continued to make up for lost time when backing up her victory in the Jan. 16 G2 Cape Verdi with a one-length score in Thursday’s G2 Balanchine S. at Meydan. An eight-length debut winner at two and third in the G1 Fillies’ Mile, Magic Lily had high hopes riding on her shoulders heading into her 3-year-old campaign in 2018 but an injury kept her on the shelf for two years. Back in action last October, Magic Lily was second in listed company in France and sixth in Lingfield’s Listed Gillies Fillies’ S. over the all-weather to wrap up that abbreviated campaign. She was a short-head best when returning to the grass in the one-mile Cape Verdi.

Bouncing out of the barriers on Thursday, Magic Lily and William Buick took cover just off the rail and about a length and a half off the lead. Sliding out into the three path rounding the bend, Magic Lily loomed large in third turning for home and was rolling down the middle of the track by the time they hit the quarter pole. The front-running Maamora (Ire) (Dubawi {Ire}) was game on the rail and managed to hold Magic Lily at bay until the final furlong, but the chestnut at last overtook her as Nisreen (Ire) (Raven’s Pass), who was also runner-up in the Cape Verdi, made headway on her outside.

“What I liked about her this evening is she seems to be growing up,” trainer Charlie Appleby said. “She only had four runs in her career before coming to Meydan. She’s behaved herself and got into a lovely rhythm and I was always confident going into the straight that she would hit the line strong. Stepping up in trip, we were always confident. It wasn’t our intention to win the Cape Verdi because the mile was a bit sharp for her, but [she won] and we were confident coming into today.

“Perhaps we could fall into something like the [G1] Jebel Hatta [on Super Saturday Mar. 7]. We have Barney Roy and a couple others and one other meeting to have a look at it. We will appreciate this evening and look forward to the future with her.”