Maclean's Music Colt Turns in 'Special' Performance at the Spa 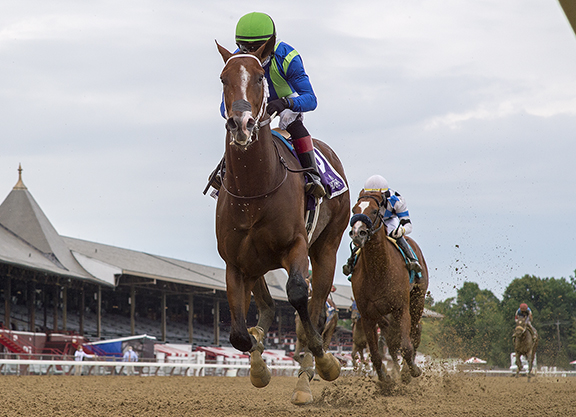 J. Kirk Robison's Jackie's Warrior (Maclean's Music), the “other” Steve Asmussen runner signed on for Friday's GII Saratoga Special S., out-footed them all and never looked back en route to a powerful score at the Spa. The imposing bay took his Churchill debut by 2 1/2 lengths June 19, and was flattered when the runner-up that day, re-opposing Therideofalifetime (Candy Ride {Arg}) returned to romp at Keeneland and earn 'TDN Rising Star' status. He was less proven on paper than stablemate, GIII Bashford Manor S. winner and 'Rising Star' Cazadero (Street Sense), but if their work together on July 26 (5f, 1:01.72, 16/31, XBTV Video) was any indication, 3-1 Jackie's Warrior may have been coming into this class test better than 8-5 Cazadero. After a gate incident that prompted the scratch of a longshot and reload, the outside-drawn Jackie's Warrior broke on top and quickly cleared with 'Rising Star' Momos (Distorted Humor) and Therideofalifetime in hot pursuit through splits of :22.06 and :44.85. The leading trio were far in front of the rest of the field–including a hard-ridden Cazadero–at the top of the stretch, but Jackie's Warrior was in a race of his own as he bounded away with impressive strides to prevail by a geared-down three lengths in 1:09.62. Momos held third, while Cazadero could only manage fifth.

“[Trainer Steve Asmussen] wanted me to get him out of there where he put himself,” said winning rider Joel Rosario. “He broke well and we were just hanging on the lead, so I just rode it from there. He was looking really nice and he was enjoying that. He had his going ears back and forth and he looked like he was going easy even though the fractions were fast. He was having no problem with that. When they came close to him he wanted to go, and I felt even more confident at that point. I knew he had something left.”

“With babies, I just wanted a clean break as he did in his first race and let his talent take over,” he said. “Being Saratoga, there were a lot of nice forms coming into it but when you get to Saratoga, not everybody likes the circumstances. I'm glad to see that he does.”

The Hall of Famer added, “I think this was a new test for him. He won first time out at five-eighths of a mile and obviously was sharp. [Sire] Maclean's Music is a horse that we had that was brilliantly quick but we always thought from training him that he would stretch out.”

Asmussen said the GI Runhappy Hopeful S. here over seven panels Sept. 7 would likely be next on the agenda for Jackie's Warrior. As for the beaten favorite:  “[Jockey] Ricardo [Santana, Jr.] didn't think [Cazadero] handled the racetrack at all. Most likely, with him being two-for-two at Churchill Downs, we'll get him back there.”

Jackie's Warrior is the 18th black-type winner and fourth graded stakes winner for Hill 'n' Dale resident Maclean's Music, whose half-brother Uncle Chuck (Uncle Mo) will look to play the role of spoiler in Saturday's GI Runhappy Travers S. Trained by Asmussen for Cazadero's owner/breeder Stonestreet, Maclean's Music made just one start–a 7 1/4-length romp at Santa Anita as a March 3-year-old, good for a 114 Beyer Speed Figure, the fastest ever earned by a debuter. The horse Maclean's Music beat that day was named Flightofalifetime–no relation to Therideofalifetime.

Jackie's Warrior's hard-knocking dam Unicorn Girl was far and away A. P. Five Hundred's most productive U.S.-sired runner–she was a 19-time winner who racked up $483,508 before being claimed out of her last lifetime start for $16,000 at the age of eight. Jackie's Warrior is her third foal.

Unicorn Girl was bought back for $110,000 at KEENOV '18 carrying a Candy Ride (Arg) filly and produced an American Pharoah colt this Mar. 8 before being bred to Into Mischief for 2021. Unicorn Girl is out of SW Horah for Bailey, making her a half to MSW Bernie the Maestro (Bernstein), GSP Richard the Great (Distorted Humor) and MSP juvenile Awesome Mass (Brethren).