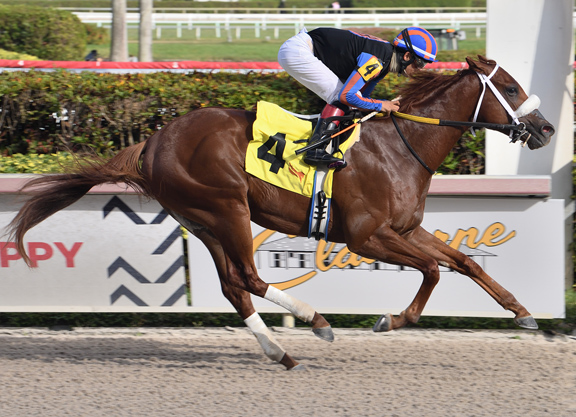 Drain the Clock (Maclean's Music) built on a 7 1/2-length thrashing of his rivals in the Jan. 2 Limehouse S. with yet another wide-margin victory while making his graded stakes debut in Saturday's GIII Claiborne Farm Swale S. at Gulfstream Park.

The chestnut won the break and led through the opening exchanges, but was content to allow the fleet Poppy's Pride (Khozan) to slide through and take up the running passing the five-furlong pole. Clocking that one's every move beneath a very confident Edgard Zayas, Drain the Clock was allowed to stride into the lead with five-sixteenths of a mile to race, pinched an unassailable advantage and was taken in hand for the better part of the final 70 yards. King's Ovation (Not This Time) made eye-catching inside progress three furlongs out, was steadied slightly between Poppy's Pride and Likeable (Frosted) in upper stretch and ran home gamely, then galloped out past the winner.

Drain the Clock gave his connections a bit of a scare in the last couple of weeks.

“He made it easy today, but 12 days ago he colicked really bad and went to the clinic. Thank God, he got there, and he was good,” winning trainer Saffie Joseph, Jr. said. “To see him win like that today–he's a good horse. We had to make the call after he breezed on Tuesday [4f in :50 3/5]. There was no pressure to run. He worked good Tuesday and didn't give us any reason to say, 'no.'”

A six-length debut winner in a local rained-off maiden Sept. 12, Drain the Clock overcame some trouble at the start to add a non-two-lifetime allowance at Gulfstream West Oct. 28. The even-money choice for the Nov. 30 Jean Lafitte S. at Delta Downs, Drain the Clock dropped his rider after an iron snapped, but he bounced back in no uncertain terms in the Limehouse.

Drain the Clock was bred by Nick Cosato and had heretofore been campaigned in the name of his Slam Dunk Racing. Madaket, Wonder Stables and Michael Nentwig were part of the ownership for the first time Saturday. Drain the Clock is possible for the GII Fasig-Tipton Fountain of Youth S. Feb. 27, a race that would represent his first try at a distance of ground.

One of 21 black-type winners for his Hill 'n' Dale-based stallion, Drain the Clock becomes the fifth winner at the graded level for Maclean's Music. While he has shown an affinity for the main track, it would be little surprise to see Drain the Clock on the turf at some point, as his Group 3-winning third dam was responsible for Prince Fahd bin Salman's Midnight Line (Kris S.), third in the 1998 G1 Vodafone Oaks for Clive Brittain and later a Grade II winner and multiple Grade I-placed in North America while under the care of Neil Drysdale. Midnight Line is the dam of MGSW & MG1SP Communique (Ire) (Casamento {Ire}). Manki aborted to Mr Speaker in 2019, but is the dam of a yearling Mineshaft colt and is currently due to Vino Rosso.