Lynch Hoping Grass is Green on Both Sides 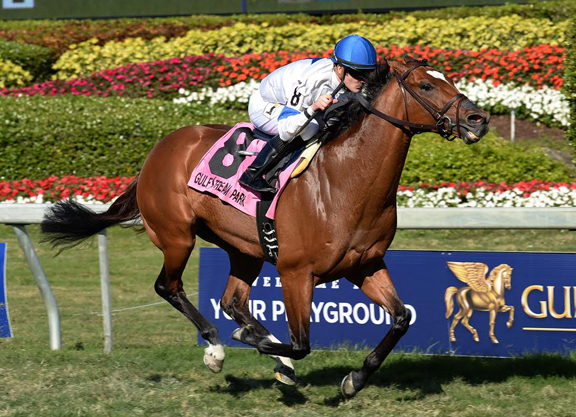 Trainer Brian Lynch will be in New York to saddle the promising 3-year-old Hammers Vision (Court Vision) in Belmont’s GIII Pennine Ridge S. Saturday, but the 52-year-old will also be keeping a close eye on the action on the West Coast some two hours later when turf stalwart Heart to Heart (English Channel) bids for his first Grade I victory in the Shoemaker Mile at Santa Anita. The latter, known for doing his best work on the front end, set the pace and held on to be a gritty second behind Miss Temple City (Temple City) in Keeneland’s GI Maker’s Mark Mile Apr. 15. Contacted by phone Wednesday afternoon, Lynch confirmed that the 5-year-old has emerged from that effort in good order and is seemingly primed for another top performance.

“We’re really happy with him going into the race,” Lynch said. “It doesn’t look like a really big field out there, but Grade Is are never easy to win. Hopefully he takes his A-game out there, and if he does, I think he’ll be very tough.”

Lynch said he received some good news Wednesday when he learned that confirmed speedball Obviously (Ire) (Choisir {Aus}), winner of the Shoemaker in 2013 and 2014, would not be in the starting gate for this year’s renewal. Nevertheless, the trainer acknowledged that West Coast turf races often feature more hotly contested paces than their East Coast counterparts, leaving some uncertainty about the likelihood of Heart to Heart securing his ideal trip.

“He’s very effective when he’s left alone on the lead, but who knows with how races are run in California,” Lynch continued. “There might be other speed as quick as him.”

While Heart to Heart’s game is old hat to Lynch at this point in his career, the conditioner is still in the process of assessing what works best for younger Hammers Vision. Scooped up by owner Terry Hamilton for a modest $47,000 as a Fasig-Tipton October yearling, the bay returned immediate dividends with a first-out victory going six furlongs over the Belmont lawn last July. Hammers Vision subsequently competed in three stakes events–including a third-place finish in the GII Saratoga Special behind GI Preakness S. hero Exaggerator (Curlin)–and returned from a winter layup with a sharp runner-up finish in a seven-panel turf dash in New York May 7.

Although Hammers Vision’s three best efforts have come at sprint distances, Lynch said he hopes the Pennine Ridge will give him a better read on his trainee’s ability to handle an extended distance.

“He’s an Ontario-bred horse and he’s obviously eligible for the [10-furlong] Queen’s Plate, so I thought we’d give him a chance going a mile and an eighth against that group of horses on the turf,” Lynch explained. “If he was to run well, it gives us a little incentive to maybe contemplate the Queen’s Plate. I thought he ran a great race off the bench. Can he run [nine furlongs]? That’s going to be the test for him. He obviously likes the course there, and he sort of made a bit of an early move in his comeback race and it emptied him out a bit.”

Lynch’s undefeated sophomore filly Lightstream (Harlan’s Holiday), winner of Keeneland’s GIII Beaumont S. in her second career start Apr. 17, proved her versatility in capturing the Soaring Softly S. in her first try on turf at Belmont May 21. The Aussie said that although that win gives him plenty of options with Lightstream going forward, the plan is to return her to dirt for the GI Mother Goose S. in New York July 2.

“She came out of the race well and we’ll probably think about the Mother Goose for her,” Lynch offered. “We’ll give her a little time and it falls into what we’re trying to do with her, a mile and a sixteenth going one turn at Belmont.”

Lynch also reported that his pair of veteran turfers, GISW Grand Arch (Arch) and GSW Power Alert (Aus) (Alert {Arg}), exited their respective third-place finishes in the May 21 GII Longines Dixie S. and May 6 GIII Twin Spires Turf Sprint S. in good order. Power Alert will be given a brief freshening prior to a try in the GIII Parx Dash H. in July, while Grand Arch will target the GIII Poker S. at Belmont June 18.