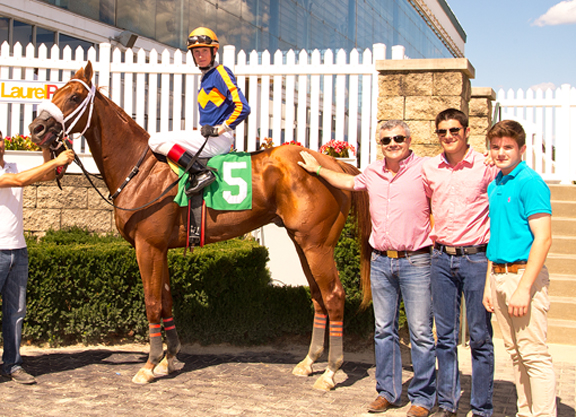 Trainer Cal Lynch and MMG Stables could be poised for an exciting late summer and fall campaign with a trio of promising 2-year-olds and the return of their multiple stakes-winning sophomore.

The action begins Wednesday when Monsoon K S A (Candy Ride {Arg}) invades from Lynch’s Laurel Park base to contest Saratoga’s GII With Anticipation S. in the blue and orange silks of MMG, whose principal is Mohammed Al-Gadhi of Saudi Arabia.

An educational third sprinting on the Laurel grass July 17 behind a subsequent stakes winner, the dark bay colt overcame a no-cover trip to earn his diploma at Delaware Aug. 6 (video).

“He’s just coming along nicely,” Lynch said of the 15-1 shot on Travis Stone’s morning line. “We’re kind of taking our shot like everyone else. There are no a-other-than [allowances] or anything like that for him down here.”

Lynch continued, “We won’t get as much respect as Todd [Pletcher] or Mark Casse’s horses who broke their maidens in New York, but he’s a cool horse, does everything right… I think they’re going to underestimate him a little bit. If you watch his last race, he was hung eight or nine wide on the first turn and five wide on the second turn. And he was kind of waiting on horses [once clear]–there was still plenty more in the tank. It wasn’t like we emptied him that day.”

Monsoon K S A, who hails from the family of GI Spinaway S. winner Stormy Pick, was just a $50,000 Fasig-Tipton October yearling, but MMG made a bigger splash at this year’s OBS March Sale when they scooped up two horses for a combined $965,000.

The pricier of those two purchases was a flashy chestnut colt later named Undulated (Curlin), who Lynch and Pennsylvania-based horseman Glenn Brok had to stretch to $625,000 to take home.

Unveiled over 5 1/2 panels of Laurel lawn Aug. 7, Undulated showed uncommon maturity and determination for a juvenile newcomer. Crowded at the start, he rallied between horses gamely in the lane to get up late (video).

“I didn’t want him to make it that hard for everybody, but he showed a lot of courage for a first timer,” Lynch offered. “He overcame quite a bit, and we were delighted with him. We were hoping he was that kind of horse. He had been training really well and we put in company and in behind [horses] and all kinds of stuff, but we didn’t think he’d need it all in his first race.”

Lynch had also been considering Undulated for the With Anticipation, but decided to wait for the Laurel Futurity back at 5 1/2 panels Sept. 27. Though he believes Undulated will be better as the trips get longer, he isn’t forcing anything too soon.

“He’s a lovely little horse who we have high expectations for, so we kind of wanted to run him out of his own stall,” the Irishman noted. “We went back and forth about the With Anticipation for both of them, but Monsoon K S A had already won at 7 1/2 furlongs, so we figure the 1 1/16 miles wouldn’t be a bother for him.”

Lynch’s patience is a trait that his owners, who have had a few horses with Lynch for each of the past three years, also share.

“Those guys are very patient–it’s all about the horse and doing right by the horse,” the conditioner said of Al-Gadhi and his team. “That makes my life a lot easier. It doesn’t take much to convince them to give a horse a little time–they’re very good.”

MMG’s other purchase at OBSMAR was a $340,000 Exchange Rate colt later named El Areeb. Backed as the 13-10 chalk at Parx June 11, he checked in fourth, but not without excuses.

“He’s exciting,” said Lynch emphatically. “We ran him at Parx first time out and he bucked shins on us. He finished fourth as the favorite, but we loved him… He got into a bunch of trouble, broke a step slow, and came back with the shins so we stopped on him for a bit.”

El Areeb has posted four breezes at Laurel this month, and was to be joined in the Lynch barn Tuesday by MMG’s accomplished sophomore Never Gone South (Munnings). A $90,000 OBS April buy last term, Never Gone South was a stakes winner at Delaware last August and ran away with Laurel’s Frank Whiteley, Jr. S. in May. Given the summer off after a nightmare trip in the Chick Lang S. at Pimlico on GI Preakness S. day, his long term goal is the GIII General George H. at Laurel in February.

Lynch came to the States from Northern Ireland in 1996 when he was 19 after having had previous experience training off his father’s farm.

“When I came here I bought my first horse and he won by 13 first time out as a 2-year-old,” he recalled. “I figured it was easy at that point.”

Lynch has only run a few horses at Saratoga in his 20-plus year career, and is still seeking his first win there–he’s run second twice before.

A win at the Spa would probably be even more thrilling for Lynch’s son Charlie. Charlie, 17, and his younger brother Anthony both work for their father. Lynch’s wife Daniela does the bookkeeping, and Lynch’s brother Fergal is a jockey (click here for more about Fergal). Cal and Fergal’s other brother Shaun has also helped Cal train before.

Lynch won’t travel up to Saratoga until Wednesday morning after Undulated breezes on the Laurel turf, but he sent Charlie up Tuesday with Monsoon K S A.

“He’s been dying to go to Saratoga, so in my mind this was the first horse to let him do that with,” Lynch said.

While many can credit their father with taking them to Saratoga for the first time, few can say it was to run a horse in a Grade II. If the MMG runners can live up to the promise they’ve shown so far, Charlie might be taking more similar trips in the near future. 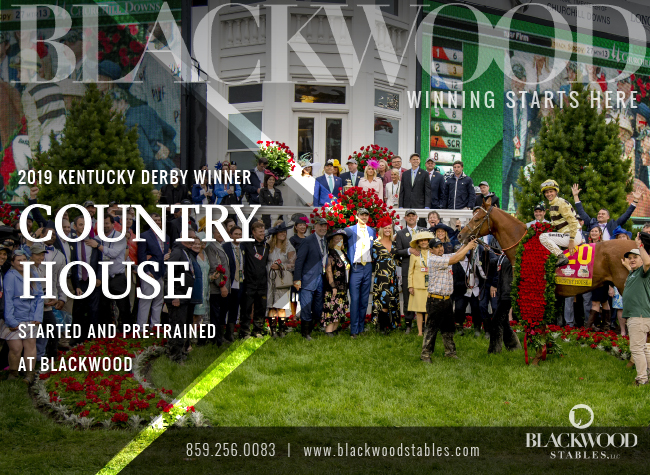